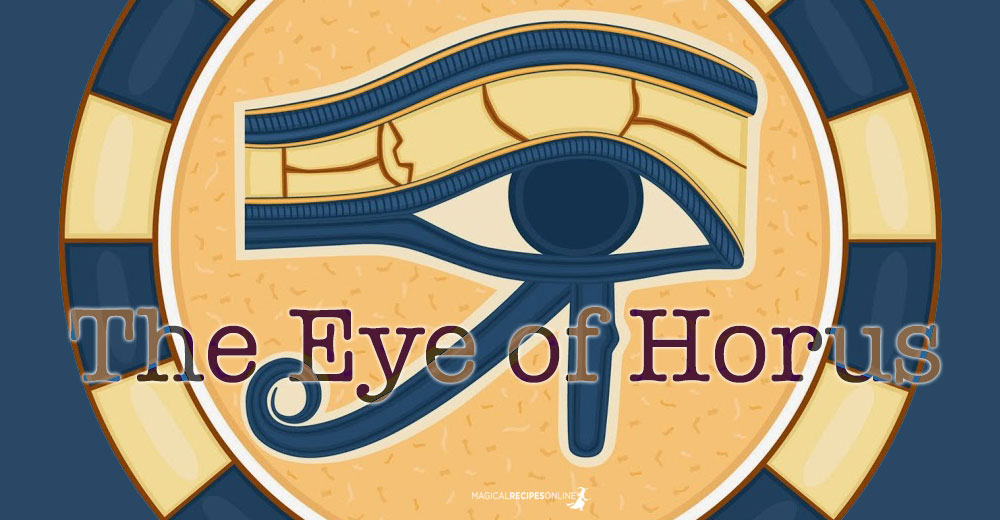 The eye of Horus also known as Wadjet – Ouadza (or Udjat, Wedjat) is one of the most distinguished and used symbol of the Ancient Egypt. The power of this as an amulet, talisman or symbol exceeds the borders of space and time of the Ancient Egypt. The Hieroglyph which depict the Eye of Horus means in fact “He who feeds the Fire and the Human Spirit”. The eye of Horus was, is and will be one of the most Powerful talismans a witch will ever learn and use! Wadjet of course is a different deity, which  become an Egyptian Zodiac Sign after the influence of the Greek emperor, Alexander the Great – (which associated with the Zodiac Signs of Scorpio).

Wadjet: Eye of Ra or Eye of Horus?

Although it probably refers to the same symbol, the eyes may be different goddesses. Both Eyes are feminine deities and the personification of the wrath of these Gods. In some ancient Egyptian accounts the eye of Ra (the Solar forces) is the left one and the eye of Horus is the right eye (the Lunar forces).

Ra’s Eye represent the magical brute force which defends Ra against the agents of disorder that threaten his rule. In the same way the Eye of Horus is the personification of Horus revenge against Seth who destabilised the Rulership of his father, Osiris.

the history Wadjet (Wedjat) in Symbolism

The symbolism of the Eye of Horus is profound yet simple to understand. The story begins with one of the most famous and crucial stories of the Egyptian Religion. The great fight of Good and Evil, the battle of Osiris and Seth.

Horus avenges the murder of his Father Osiris, by Seth

Horus is the falcon headed God, the son of Osiris and Isis. He is one of the most worshiped Gods in Egypt. He is a solar deity worshiped as a sky God bearing the Sun as his right eye and the Moon as his left eye. When Horus decided to fight his parents father, Set (Seth) in order to take revenge of the slaughter of his father and regain his father’s throne, Horus won but Set managed to gouge out his left Eye.

His left Eye was later restored by Hathor or Thoth in some versions of the same story as healing process after this fight. When Horus was fully recovered he offered his left eye to his father as a symbol of Healing, Love, Restoration, Protection and Sacrifice. The qualities of the Moon.

The incantation to Enchant the Eye of Horus

In the Egyptian Book of the Dead we read the incantation:

“…The Eye of Horus is your Protection,
O Osiris, Foremost of the Westerners,
its spread its protection over You,
it fells all your enemies for You,
and your ememies have indeed fallen to You!…”

Variations of the Eye of Horus is seen worldwidely, depicting mostly an eye in a blue glass. This amulet is worn in the Mediterranean countries for protection from the Evil Eye. It is believed to be the most powerful amulet.

The Eye of Horus – Wadjet symbolized the Divine Omnipresence, the fact that God(s) watches all over us and that Karma never sleeps.

the Eye in Hinduism

The Eye of Horus has similar symbolism with the third Eye of Shiva (Siva), the one of the three major Gods of Hinduism. The third Eye of Great Lord Shiva of Hinduism symbolized his ability to see everything that happens all over the World and his authority over Death and Rebirth.

the Eye in Buddhism

In Buddhism we can see that Buddha is referred to as the Eye of the World. The eye symbolism is obvious in the Triple Gem, the Triratna (Tiratna), which symbolizes the most valued qualities a Buddhist should have. Buddha, Dharma (the law of truth) and Sangha (the living or not living community of those who practice Buddhism).

The Third eye (also called the  inner eye) is a major Chakra (energy wheel) and a mystical concept of an invisible eye. The Third eye, according to the Witches and Mages, provides Sight beyond (ordinary) sight. Most of the times this third eye is symbolised by the Eye of Horus – Eye of Ra.

The Wise Ones claim association of the Third Eye with Pineal Gland. The pineal gland (also known as the pineal body, conarium or epiphysis cerebri) is a small endocrine gland in the vertebrate brain. The shape of the gland resembles a pine cone, hence its name. René Descartes (also known as Cartesius, 1596 – 1650), a French philosopher, mathematician, and scientist, believed the pineal gland to be the “principal seat of the soul”. Many scientists still try to identify this gland as the material body’s gate to spiritual forces. 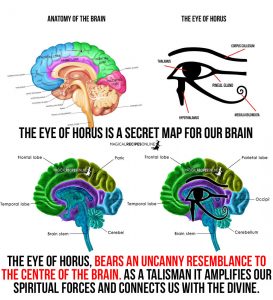 Moreover, the Eye of Horus, bears an uncanny resemblance to the centre of the brain. As as symbols it amplifies our spiritual forces and connects us with the divine. This grants us with Magical Powers and Protection. It grants us, the Sight!

The Eye of Horus In Christianity and modern history

In Christian iconography we see the Father of the Holy Trinity depicted as a Great Eye and in some cases all Trinity. This of course is inherited by the ancient religion. The Eye is the personification of the God Himself, just as the Eye of Horus acts as the Wrath of God Horus.

The Eye of Providence also known as the All-Seeing Eye, is a Masonic symbol used to remind that the God supervise the actions of the Brotherhood. It’s close association with the Wadjet is obvious.

The Great Seal of the United States of America uses the Eye of Providence remind the same thing. That the actions of the country and the american Nation is supervised by God Himself.

In alchemy while two eyes represent humanity and nature, the One eye has more supernatural powers which exceeds the Human ones, like the Cyclopses the one-eyed monstrous beings possessed with huge strength. The one Eye defines the Divine presence in the Great Work, a Divine power. In alchemy the pupil of the Eye is the Sun and the tear of the Eye of Horus often called the Golden Tear is the healing power of the Sun, the force of Creation.

In Maths and Science

In Ancient Egypt most fractions were written as the sum of two or more unit fractions. (a fraction with 1 as the numerator), with scribes possessing tables of answers. Thus instead of  3⁄4, one would write  1⁄2 +  1⁄4.

Different parts of the Eye of Horus were thought to be used by the ancient Egyptians to represent one divided by the first six powers of two: 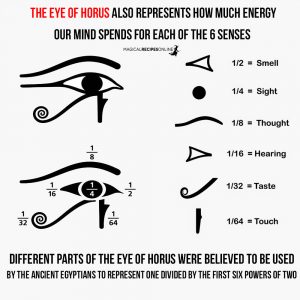 Some scholars believe that the Eye of Horus also represents how much energy our Mind spends for each of the 6 (!) senses. Therefore, starting smelling is the most important of our senses. Then comes sight… etc.

In Magic the Eye of Horus – Wadjet can be used:

You can charge the Eye of Horus by rephrasing the verses of the Book of the Dead:

Let The Eye of Horus be my Protection,
O Osiris, Foremost of the Westerners,
let it spread its protection over me as it did with You,
may no harm come to me and no one can harm me!

Remember that the possession of the Eye of Horus now belongs to Osiris and not Horus so the proper prayer should be to Osiris. But of course I think that Osiris would not matter if the prayer will refer to his beloved Son.

For those who don’t prefer to call the Egyptian Gods charge the Eye with the Power of the Moon, call the Lunar Angels, like Archangel Gabriel and ask them to help you charge the Amulet with their protective powers.