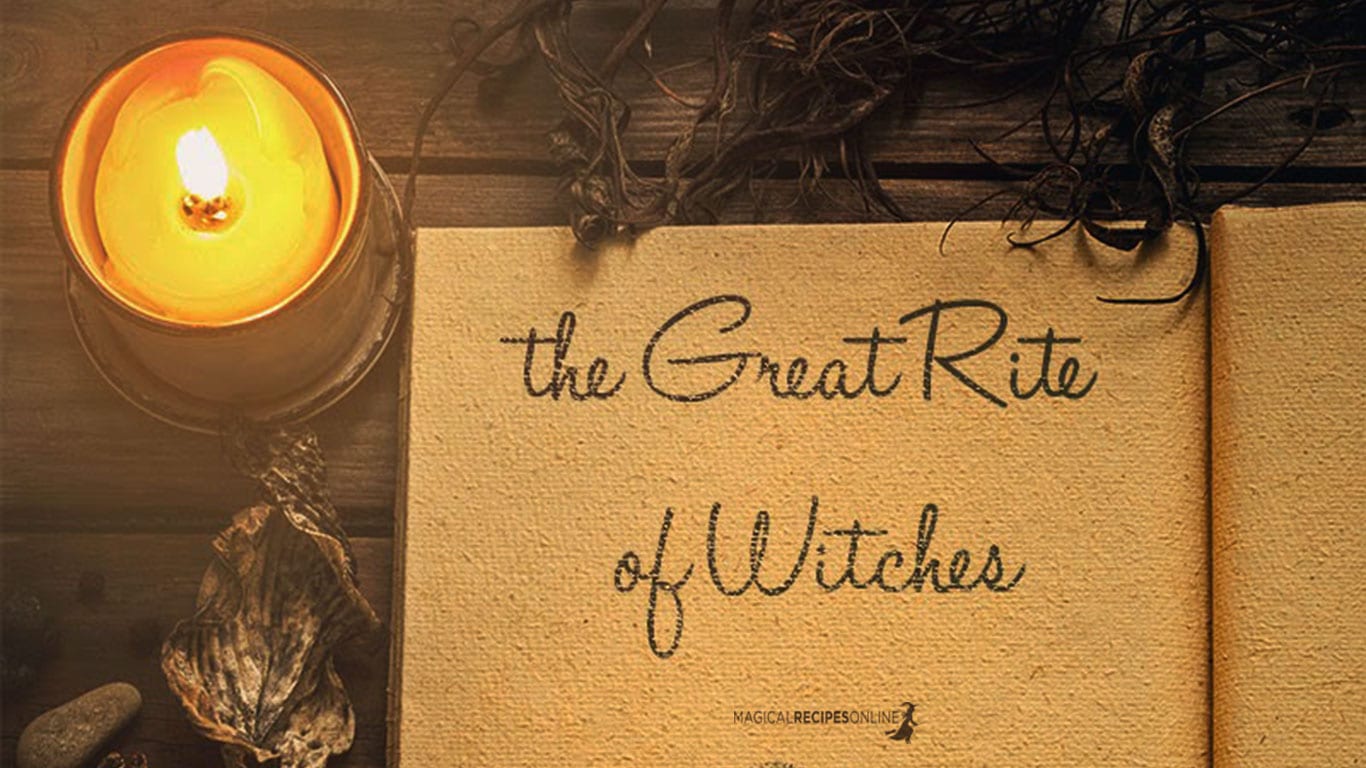 The Great Rite of Witchcraft

So although there were many who claimed to know the truth about the Great Rite describing very different versions of this core-Ritual, the truth is only one:  The Great Rite of the Witchcraft is the actual or symbolic sexual intercourse of the Male and Female Divine powers.

The Great Rite is traditionally performed on the 1st of May for the Northern Hemisphere or 1st of November for the Southern Hemisphere (Beltane) or 30th of April/Northern  – 31st of October/Southern (Beltane’s eve), a day of tremendous arcane Magical Power, utilised for Millenia by priests, priestesses, mages, witches and every day people by all over the world. The 1st of May (Beltane in the Celtic tradition and in WICCA) is a sacred Sabbath right in the middle of the Spring Equinox and the Summer Solstice. This is considered a Magical Day of intense sexuality. A day most appropriate for sex magic and fertility spells.

The two Principles of the Material World, the Male and the Female are celebrated in their divine marriage, the Hieros Gamos (Ιερός Γάμος). In some traditions the Male principle is identified as the Horned God who lusts for the Maiden Goddess longing to consummate the marriage. This sexual intercourse is often reproduced in fancy Sexual Magic rituals of actual sex (!!!) of the High Priest and the High Priestess, or even with the participation of members of the covens and worshippers.

The Great Rite of the Witchcraft is the actual or symbolic sexual intercourse of the Male and Female Divine powers.

If we try to “peel the onion” of this Ritual we will be amazed by the plurality of the symbolism. Male and Female, Yin and Yang, Light and Darkness, Life and Death. The Horned God is the World’s Libido, the untamed nature longing to unite with the Maiden Goddess, a Virgin, the purest form of our Spirit. In this Rite we celebrate the conception and materialisation of our Dreams, the Manifestation of True Magic!

By some Covens the sexual intercourse is often replaced by “the Cup” symbolising the Vagina, the Female Principle and “the Sword” symbolising the Phallus – Penis (click here to read more about the Symbol of Phallus in Magic and the Old Religion), the Male Principle. The High Priest would ritually shove his Sword directly into the High Priestess’s Cup in the climax of the Ceremony. This Ritual was also an important part of the Gnostics who integrated the ritual in their religious practice and named it Gnostic Mass using both symbols and sometimes sex magic due to some researches and scholars.

In alchemical terms, the holy union, the Hieros Gamos,  is translated as the first of the Lesser Conjunctions. It is associated with the Lovers of the tarot deck, the Marriage of the Emperor with the Empress. The Lovers is the sixth card of the Major Arcana of the Tarot deck(click here for the Magic of Tarot). The Number 6 is associated with Goddess Aphrodite – Venus in latin – the Goddess of Love and Sex. In Numerology (click here for more Numerology) is also the first “perfect number” as 1+2+3 = 6! It possesses both the male principle (1), the female principle (2) and the union (3).

The Great Rite Performed at home

For Manifestation of True Magic & Materialising our Greatest Dreams:

First you have to understand that both the Male and the Female principles live in you. It’s the Yin and the Yang. The purpose of the Ritual is to balance our fiery Untamed Animal Nature and our Ever-living Spiritual Nature. You both have in your heart the Hunter (Horned God – Libido) and the Maiden (Virgin Goddess – Spirit). This is how you will proceed, only by knowing that the Sacred Marriage will occur in you, you will become the Hermaphrodite – sort of speaking – where all the Divine powers cross.

Now Light up the White Candle and chant

“I light this White Candle which symbolises my ever-living Spirit.  I am eternal, I am divine the flame shines like my spirit”

Focus on your divine nature, you’re all-powerful spirit, the source of all the Magic. You possess Divine powers, you are part of the Divine.

Now Light up the Red Candle and chant

“I Light the Red Candle which symbolises my untamed animal nature, I am the creator of my reality, I am alive,  the flame shines like my life-force”.

Focus on your animal nature, the powerful Lion in you, your Libido, the power of your Will. You are part of this World and you co-create reality.

Now take the White paper and write down with the Red pen your desire. It should be clear like

“I am successful” or “I am beautiful”

The most appropriate date to do this is the Beltane’s eve. If you decide to do a ritual then you don’t need the Cauldron. Just let the Bonfire consume your wish!

Focus for several minutes on your desire and visualise the result as if it already happened! YES! See yourself successful. See people around you admiring you, telling you how great you are. Feel the power you long RIGHT NOW! The spell – as all spells – utilise the Law of Attraction (click here to see more tricks).

Now light up the piece of paper CAREFULLY (ALWAYS USE FIRE SAFETY INSTRUCTIONS) in the Cauldron using both the White and Red candle. Let the flames consume your wish and let the smoke go up in the skies and unite with the Divine.

Let the candles burn till the end (never leave candles unprotected – watch over them always!).

The last part is to take the ashes of your written wish and blow in the winds. The spell is done!