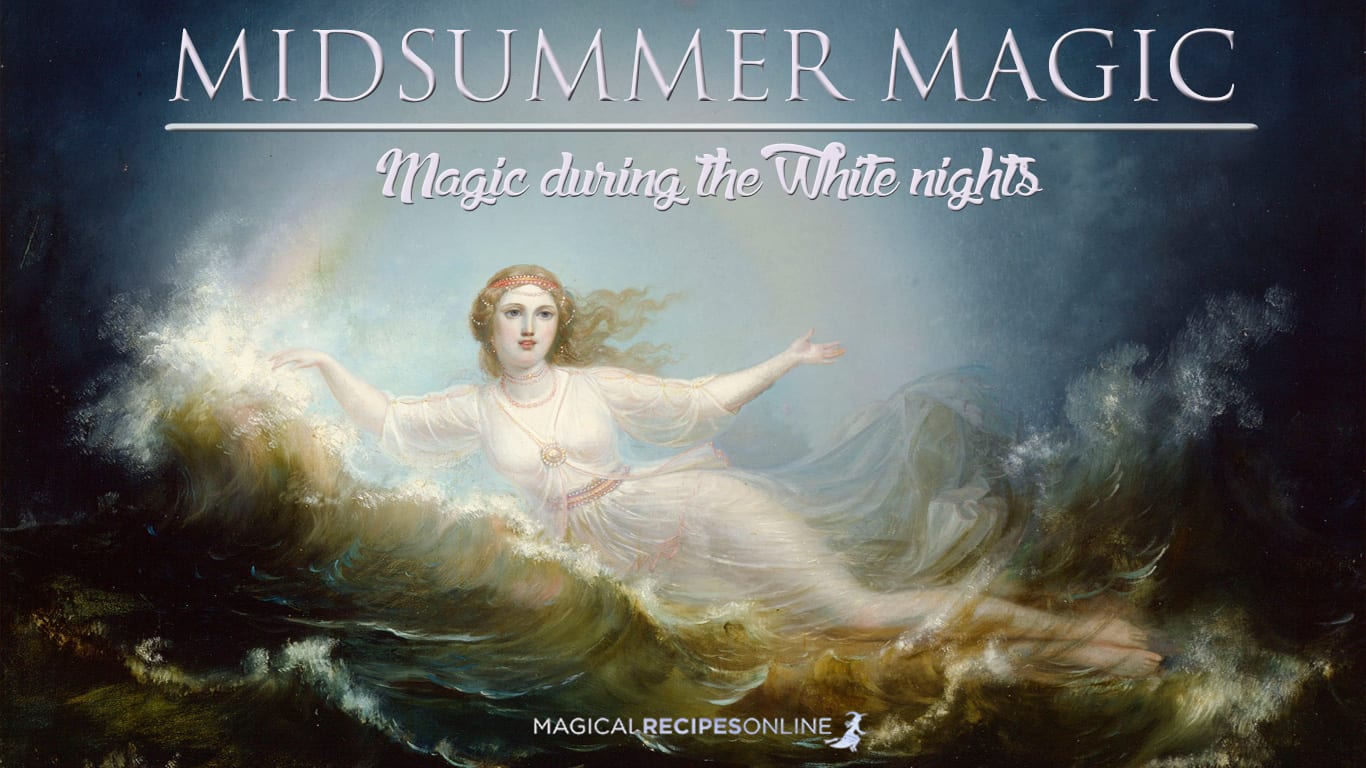 White Nights are called those “nights” in very Northern or Southern latitudes outside the Arctic or Antarctic circles where the Sun never sets and it’s experienced as twilight. There, in a part of Scandinavia, the Sun and the Moon were considered sisters, part of the same creation. Let’s dive into Kalevala, the epic story of Finland.

Long time ago, Goddess Ilmatar, a virgin female spirit of the Air, broke an egg of a bird who nested on her arms. The primordial Waters were filled with the broken egg’s parts. Sun and the Moon are two parts of the of the same eggshell or in some myths the egg’s yolk became the Sun and the egg’s white the Moon embracing the light of her sister, the Sun.

Ilmatar, the virgin spirit of the Air was impregnated by the Ocean and the cosmology of Finland began! In the hearts of the Finish people, the Sun and the Moon were believed to played equal parts on weaving the fates of all humans, extremely potent and powerful factors of the whole world, often being assaulted, attacked or even kidnapped by other forces who were jealous and envy of their powers.

Päivätär, the primordial goddess of the Sun (and in charge of Summer) weaves the Golden light of the Sun while her sister, the primordial goddess of the Moon weaves the Silver light of the Moon, helping each other to weave the fates of all the World. In the Finish stories and myths, many evil hags will try to tap into Päivätär”s powers and try to steal her magic. There will always be those who may envy us, why not the Sun, herself? Päivätär however will always find a way to get her powers back and go back to her Cosmic role.

Päivätär, is believed to always answers the prayers of those who call upon her blessings. She is believed to give health, wisdom and riches. The secret teaching that lies beneath the story of Päivätär is that even the Sun can be hunted, imprisoned or even kidnapped. The Sun will never stop to shine, as the Light will always find the way to shine all over, and fill the Skies and our Hearts. Do you feel your life needs to restart? Do you feel you want optimism back in your life? This is a spell which allegedly will help you rise from your soul”s darkness and receive the Sun”s blessings in the powerful Summer Solstice! We can use the words of Väinämöinen, the wise enchanter, son of Ilmatar with the Magical Voice, to invoke the powers of the Sun and Moon to bless our lives.

A Spell to Rise From Darkness!

Right before the Sun rises from the darkness of the Night, hold in your hands fresh-cut leaves and flowers that bloom in Summer (do not buy flowers, cut a few with your bare hands – just few, and always pay respect to the plants and leave an offering, like water). Now holding the leaves and the flowers chant while the Sun rises in the Summer Solstice!

Golden Moon from stone delivered, Fairest Sun from rock arisen, Like the golden cuckoo rise you, Like the silver dove arise you, Lead the life ye led aforetime, and resume your former journeys.

Rise for ever in the morning, From this present day hereafter. Bring us always happy greetings, That our wealth increases ever, Game for ever in our fingers, Fortune at the points of fish-hooks.

Go ye on your path with blessings, Go ye on your charming journey, Let your crescent now be beauteous, Rest ye joyful in the evening.

PREVIOUSInterview with Robert M. Place, the creator of Alchemical Tarot & the Burning Serpent Oracle
NEXTAdam and Eve Root: The witch’s root for love