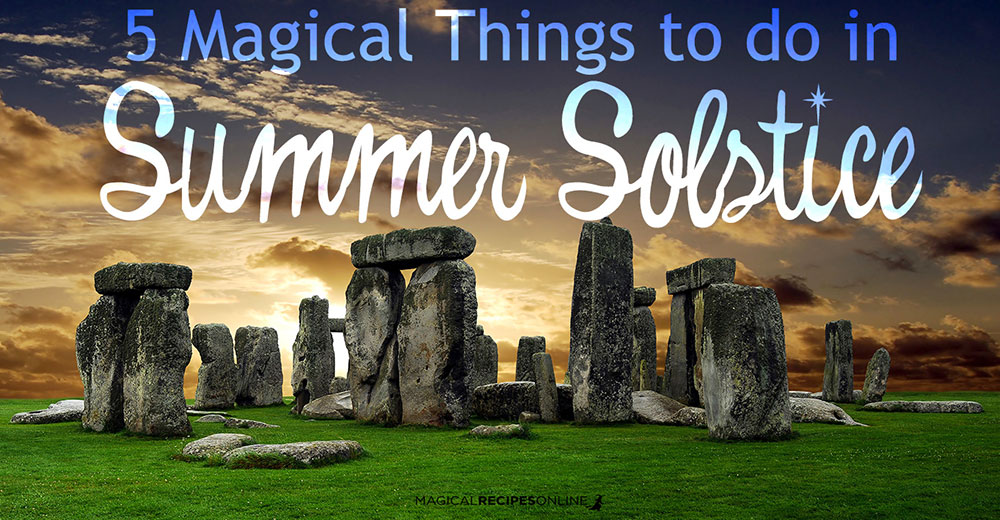 Summer Solstice (a.k.a. Midsummer or Litha for the Celtic tradition) is the biggest day of the whole year and one of the most Magical Days. The Summer Solstice is the day when Sun leaves Gemini and enters the sign of Cancer. This day’s enchanting energies are considered extra potent for various magical activities while it is also believed to be a day which favours nearly all spiritual endeavours.

There are thousands of customs which derive from Folk Magic. Here we are going to present you 5 magical things to do during the Summer Solstice and the Midsummer’s eve! (for example it is considered that during Midsummer (June 20-21) fairies bestow good luck upon people who respect nature & the old ways while it is also the best day to see a fairy! ).

How to see a fairy in Midsummer’s eve?

It’s easy. Focus your sight on a spot under a big tree (where usually fairies and elves dwell. For maximum success choose a tree which corresponds to Fairy Magic. Use the Celtic tree guide here!) Stay there patiently and quietly with half-eyes opened.

When fire reaches its peak its like magic runs in our veins in a very obvious way! Hence our powers are exhaulted!

Also, all herbs collected during Summer Solstice and Midsummer’s eve are considered to possess extra Magical & Healing abilities!  What you can do is to go out and collect any herb you want to use in your magical practice. But even if you don”t know what to pick just use your instincts. Yet if you can, pick up some St. John’s Wort as this herb is associated with most magical properties of Midsummer. It is said, that carrying St. John”s wort will even prevent you from getting stricken by thunder!! (click here to read more reasons why!) Dry the herbs and -safely- burn them on a charcoal while asking what you want.

One of the most potent Magical – and easy- activities is the ritual bathing.

“To glow like the Sun”: On the eve of Summer Solstice prepare a strong chamomile infusion. Stir (only) clockwise preferably with a wooden spoon. Witches washed their hair and face with this infusion. Chamomile is the herb of Asgard – the Realm of Gods, directly channeling the energies of the Sun, breaking curses and hexes on you, inviting love, beauty, good luck and strong magical powers.

While the Sun rises and his golden rays illuminate nature, dive in the Sea or River or Lake (somewhere you know it’s safe of course) while saying “all dirt and dread I live behind, my bright future is now designed”. Now consciously break free from anything that holds you back and pursue your bright new future drenched with good luck and spiritual help.

A custom which is found in many cultures is the following. During the Midsummer”s eve, young boys and girls create garlands with flowers and herbs which bloom in the wilds. Then, in Midsummer, they toss it into the Sea or a Lake / River while shouting their wish.  If the garland swims away or drowns then its believed that the wish is accepted and just began to become true! But if the garland comes back then the time is not yet ready.

The Wise ones used to gather thistles during the Midsummer’s eve and then hand them on the door’s frame (outside of their house). This was a powerful charm to keep evil spirits away from their property!

5. Jumping over the Bonfire

The most important hallmark of Celebrating the Summer Solstice is leaping over the bonfire during Midsummer’s eve, which rids one from “everything unnecessary.” Summer Solstice is associated with the Element of Fire which bears both constructive and destructive properties. Jumping over the flames is an ancient ritual which was interestingly “christianised” too. But leaping over the bonfire wont just help us get rid of “everything unnecessary”. Couples leap over the sacred fire holding hands, so that the magical energy of the flames binds them together in love and happiness.