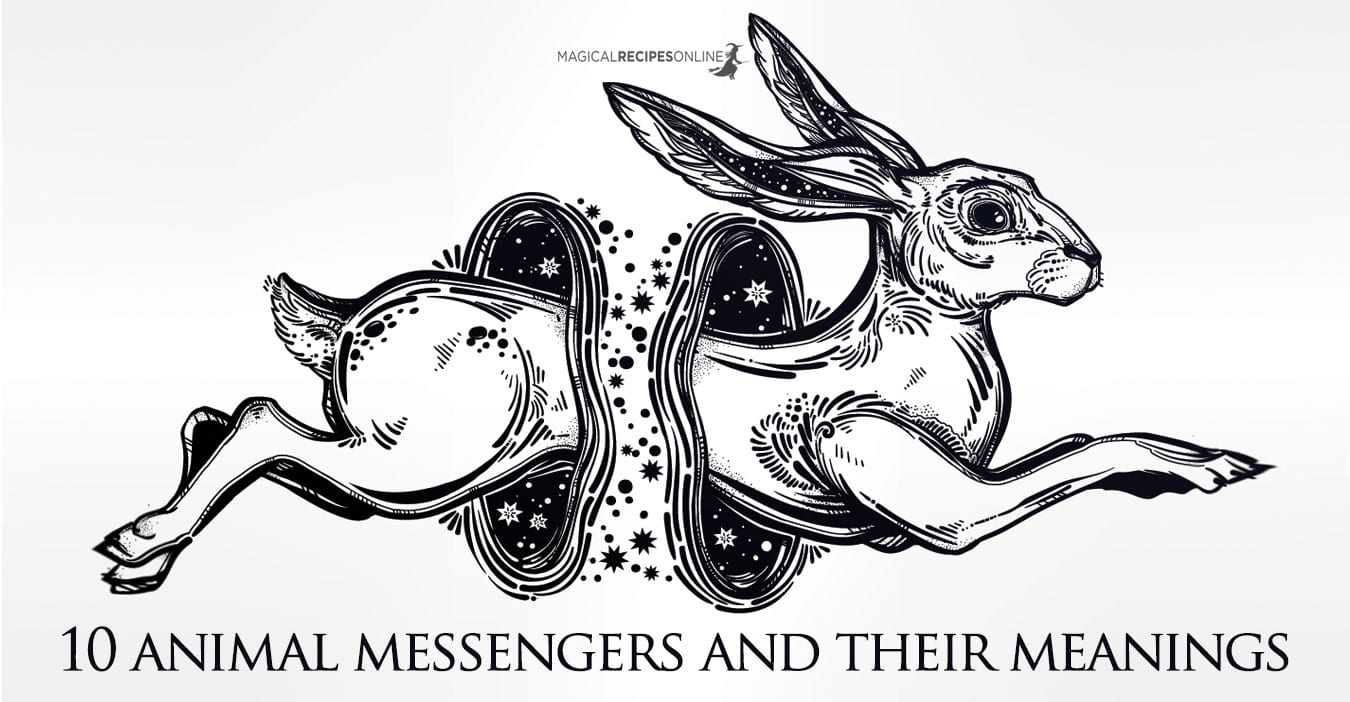 If any of these animals accidentally cross your path, powerful omens are presented to you according to ancient cultures and their Old Ways.

Omens and the Old Religion

During the Old Times animals and plants were all associated with Gods and Goddess. Athena had Owl as her sacred animal while Poseidon protected Horses and Artemis (Diana) deers. Everyone had a soft spot for animals, therefore close encounters with animals were supposed to be divine interventions at some point. We have selected the ones who are considered to be the most powerful omens of all.

An important notice before analysing the omens. Sometimes, the “accidental” appearances of Animals can be the encounters of our Totem Animals, trying to catch our attention. For more information about how to find out your Totem Animal click here.

Owls are believed to be harbingers of doom and carriers of unimaginable wisdom at the same time. (Read here more about Owls as totem animals) Maybe owls know things and they appear to warn us about what is coming – usually something huge – either this is for good or ill. Owls have been associated with many gods and goddess but one of the most powerful association is with Athena (Minerva) the Goddess of Wisdom in Ancient Greece.

When an Owl appears one has to be extra careful about his/her next steps as the Owl tries to make us ready for what’s coming (it doesnt have to be bad but it’s certainly very important or even life-changing). If you are a Witch, the appearence of an Owl probably means that our magic is strong and we should be very careful with the energies we summon. We should choose wisely!

Owls are not omens of Bad Luck or Harbingers of Doom (they can be if we see two owls fighting and shouting over a house). They are messengers of Great News. Owls are considered Royal Birds, therefore seeing them can be considered as omens of success.

Spiders are also associated with the Goddess Athena, the Goddess of Wisdom. Spiders are also considered sacred animals as their web symbolises that we are all connected with each other and all nature. However the appearence of a Spider does not have the same meaning as Owls. Spiders are trying to “ward” or remind us of a friend.

In ancient time Spiders were omens for a friend (either from the past or a close friend). We will probably soon meet this friend who is going to give us brand new information. In general, Spiders are good omens, bearers of Good Luck.

“If you find a spider at night, it means good luck.”  Kemp P. Battle

You walk by the street thinking of your daily routine when for some reason a cat caught your attention. You refuse to believe that this is important but the cat for some reason follows you and tries even harder to make you turn around. Cat is the personification of intuition (click here to read more about Cats as totem animals). When a Cat appears out of nowhere and for some reason and you can’t help but notice their weird and cute moves, it’s an omen (or omens) that you have to listen to your heart.

Cats are associated with powerful and Wise Goddesses like Bast, Freya and Brigid. The weird cat symbolises your hidden magical and spiritual powers which now you have to listen. If you are witch then you should probably be more careful the next time you cast a spell as the cat tries to warn you that you’ve probably have to get in touch with your higher self before you cast more spells. The Colours of cats do matter:

Black Cats: symbolise the change of Luck (for good or ill) and Wisdom 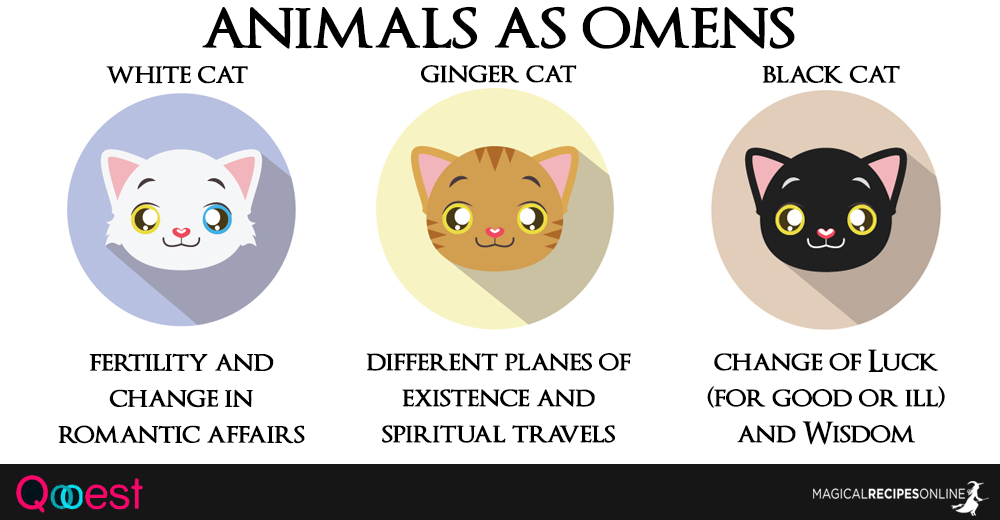 These creatures have the bad reputation of being harbingers of death and dark magic. However, although they sometimes can bring bad news, they are the personification of truth. Crow / Raves in the Sacred bird of Thoth, Great Egyptian God of Wisdom and Magic. Moreover, Crow/Raven is sacred to Apollo (the God of Sun), Hera (Queen of the Gods) and Asclepius (God of Medicine), Odin the Allfather and the Morrigan.

Seeing a Crow means that truth is going to be exposed to you soon. Ancients believe that wisdom cannot be achieved if you are not ready to receive this information. The sight of a Crow is the divine confirmation that you are now ready! Soon you will learn something really important.

Moreover, according to a Medieval Superstition, the number of Crows, Ravens or Magpies you see in the morning, is an omen of how your day will be:

One for sorrow, Two for mirth, Three for a wedding, Four for a birth, Five for rich, Six for poor, Seven for a witch, I can tell you no more, Eight for a wish, Nine for a kiss, Ten a surprise you should be careful not to miss, Eleven for health, Twelve for wealth, Thirteen beware it’s the devil himself!

These wonderfully enchanting horned creatures are sacred to the Goddess of the Moon, Artemis (Diana in latin). Artemis was believed to love them so much that she kept having one as her close companion. Artemis is a solitary Goddess who loved being alone in the Woods with her beloved animals and trees.

Seeing a deer is a symbol that Heavens know what you’re going through and that you should continue facing these problems with Grace, Purity and Dignity. Deers keep their heads up even when hunted. Be like the Deers. Stand up and face the problems without losing your inner beauty. Become a beautiful Warrior of Life.

These fluffy playful creatures symbolise Springtime itself as they appear after winter in large number.  Rabbits reproduce themselves easily and rapidly and this is why seeing a rabbit is considered to be an omen of fertility and abundance. They love play in the grass, digging and searching for precious food.

Moreover, rabbits are believed to be really lucky as some believe to be fairies or good witches transformed. When a Rabbit crosses your path a change of luck is coming (mostly for the good) and the message is that you should trust Heavens.

Discreet but strong, quiet but fierce, lizards symbolise the Dreamworld. If a lizard happens to catch your attention is an omen that you have to pay more attention to your night time as dreams can reveal something really great about you. Try to be more organised. Get a Dream journal and start writing down your dream history. You are about to reveal a great truth.

Alchemists believed that Lizards are EXTREMELY lucky creatures and the sight of one was a promise that their work is on the Right path! Therefore, if lizards cross your path then your work is probably blessed by the divine powers.

Snakes also have a VERY bad reputation as it was linked with the Devil and his minions. Although rarely snakes can be harbingers of evil magic, this is usually not the case. Snakes symbolise Mother Earth and nature magic. In fact Snakes symbolise the Old Religion at some point – some believe that when St. Patrick expelled snakes from Ireland he was actually banishing the Pagans from the island. But please, the next time someone tells you that snakes are satanic remind them what Jesus said: “be wise as the snakes – γίνεσθε οὖν φρόνιμοι ὡς οἱ ὄφεις” Matthew 10.16

Seeing a snake is a reminder that we humans hide very powerful forces inside of us as Mother Earth embraces all these powerful natural phenomena. However we have to master our passions and direct all this instinctive energy to something really creative. Snakes are symbols of great wisdom and power.

Bright colour, winged miracles who usually appear where water hides nearby. Dragonflies are directly connected with the Fair Ones also known as the Fairies (or Shidhe, pronounced as Shee – click here to see how to spot Fairies). The Dragonflies are usually reminders that the spirits of Nature watch down our work and they constantly try be part of it.

Dragonflies can also be spirits of our ancestors who with the help of the fairies are here to help us by giving us the strength and the wisdom we need to proceed with our lives. Dragonflies are omens of nature’s blessings and a reminder that life does not end here. We are immortal and we should never give up!

More like Lady-Luck this wonderful creature is a symbolic synonym of Good Luck. Whenever they appear something good is going to happen as they symbolise the conquer of Life over Death. Good Luck will conquer Evil Magic and Good wins! Ladybug whenever appears tries to cheer us up and help us understand that no matter how hurt we feel, this should be a turning point and change our way of living.

Ladybug is the messenger of Joy. Observe how kids (who are far more sensitive to spiritual forces) react when they see a ladybug. They instantly cheer up and start shouting that they found one! Yes, this is NOT a coincidence. Ladybugs are the spiritual forces of good news and good luck! Cheer up! Good wins!

PREVIOUSAre you a Rainbow Witch ?
NEXTWitch’s Sabbats – all you want to know