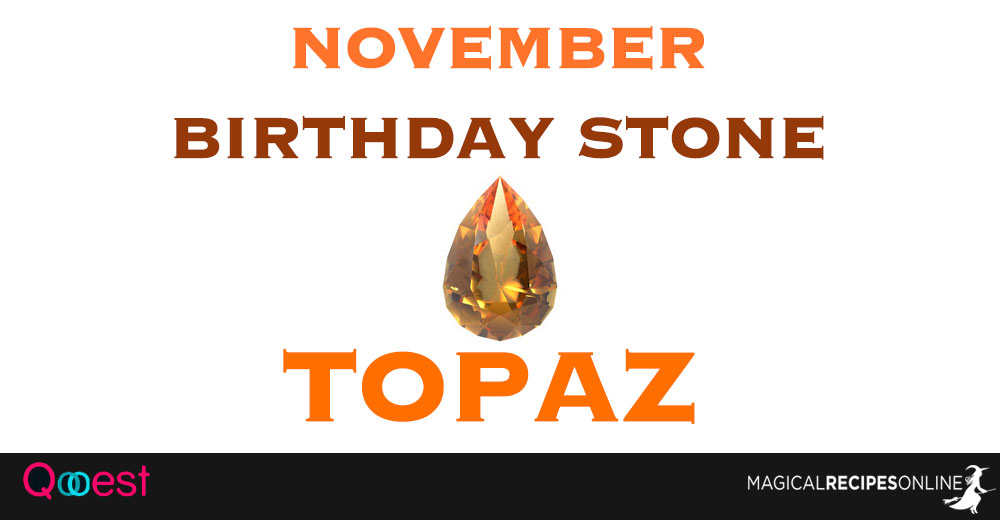 The Birthstone for November is Topaz. It has been featured in history for at least as far back as Ancient Egypt where is said that it’s colour came form the golden light of the Sun God Ra. To the Egyptians this made it a powerful amulet, protecting the wearer from harm….as long as they were faithful to Ra. The name Topaz comes from the Sanskrit word for “Fire” which ties in nicely to the Egyptians belief about Topaz being connected to Ra.

There are legends saying that in the presence of poison or toxins a Topaz would change colour; however you need to use it with care because it’s abilities wax and wane with the cycle of the moon. While it is a relatively hard gem but if it is hit hard enough it can be cleaved in two.

It comes in a wide range of colours, and each has it’s own properties but all promote understanding, compassion and empathy. It is a stone of success in all areas of your life from love to wealth, from creativity and intelligence. It is fantastic for finding balance in your life, bringing calm to your thoughts and emotions, it also can be beneficial to stimulate the metabolism and digestive system.

It has long been known to be used for protection, it can protect against envy or intrigue. It’s also said that it can protect against disease, injury and even sudden death. Like many other gemstones it will protect you from baneful magic. Having Topaz in your home can help ward against accidents; while having some under your pillow will fend of nightmares.

PREVIOUSDo you Often Wake Up between 03.00 to 05.00 A.M?
NEXTTest of The Northern Witches – Pick A Familiar