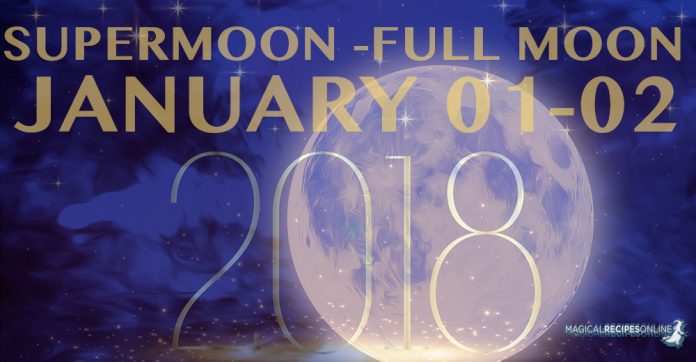 Predictions for the Full Moon in Cancer:

The New Year started and right away a very auspicious, yet peculiar, Full Moon is formed. On January 2 at 2:24UT the Moon from Cancer accurately opposes the Sun in Capricorn, forming the first Full Moon of the year.

I said “peculiar” because all the lunar aspects of the 1st of January are stressful. Therefore, we may feel that this Full Moon is a bad and difficult one, but even these difficult aspects change to auspicious ones after the moment of the Moon-Sun’s opposition. The long-term aspects, though, are for the most, auspicious to very auspicious. Most of them are already active since the waxing Moon, so please do refer to the articles about the New Moon’s general predictions and the New Moon’s zodiac predictions, as well.

On January 2, the Sun from Capricorn, accurately, forms a hexagon with Neptune in Pisces. This aspect was active already and will be active for most of the waning Moon period. Venus will do the same just a day after. Pluto has also been in hexagon with Neptune for long time now, and will remain so for long time to come. All these aspects empower the already strong magical vibes, even more. Thus, magic will remain strong and potent during the whole waning Moon.

January 3rd will be one of the most important days of this waning Moon. Uranus, after 5 months of retrograde motion, turns into direct motion that day. By doing so, all planets will be in direct motion until the 23rd of March, when Mercury will turn retrograde again. This three months is a very auspicious period – or it should be. With all planets in direct motion, luck is plenty, progress gets easier, and everything is calmer. But, do not relax! We have until the New Moon to make the most of this very beneficial happening, because on the day of the New Moon – January 17 – we enter an ecliptic period.

Mercury is in triangle with Uranus, and will remain so during the waning Moon. The accurate aspect will take place on January 6, when Uranus will be in direct motion, but the aspect will be active until the 14th of the month. The speedy Mercury and the directly moving Uranus in cooperation can make changes and miracles happen at once.

On January 8, the Sun and Venus will each form accurate hexagons with Jupiter in Scorpio. Of course, these hexagons are already active, as we’ve seen in the New Moon’s article. Now, they reach the peak of their power. Both these hexagons will remain active for the whole waning period, and a few days in the next waxing Moon. Not to mention Pluto is in a 13-month-long hexagon with Jupiter. Arts, beauty, luck and health all receive great blessings.

Right after that, the brightest day of the period happens. Pluto, Sun and Venus conjunct each other accurately on Capricorn. Capricorn’s power reaches its peak. We’ve seen what this means in the New Moon’s article, so please refer to it. Of course, through Mars and Jupiter Scorpio will reach a great amount of power as well. The same will happen with Pisces through Neptune. Therefore, every influence mentioned in the New Moon’s articles will also receive a great amount of power and boosting then.

Also, remember that on January 16 Jupiter will accurately forms a hexagon with Pluto. As we’ve seen when this aspect started being active two months ago, this is the first and most auspicious of the three accurate hexagons the two planets will form during their cooperation. As just after the ecliptic period starts, make the best use of it during this waning Moon. Work your magic, divination, spiritual communication and everything and anything that has to do with different plains, times and spaces and entities from there. Dream magic and astral projection included.

So, in a word, this second half of the lunar month will be like the first half. More lucky, less difficult, but, for the most part, the same. Other than the Uranus turning in to direct motion, there are three significant points that will differ the colour, or rather the hue, of the waning Moon in comparison with the waxing Moon.

Mercury will enter Capricorn on the 11th of the month. By doing so, even more planetary focus will be on Capricorn. Even more, Mercury will be in conjunction with Saturn from the 5th onwards. This will make the already gentle Saturn even gentler and, also, will make meditation, visualisation and hypnotism very strong and promising.

The second point is that now – and for a few days now – Mars doesn’t support Saturn. This is both good and bad. It gives less motivation on Saturn’s influences and less willingness to work on them. But also, it releases Saturn of the stress Mars occasionally receives, and the stress Mars’ hyper-activity can cause, even when this hyper-activity is auspicious on its own. As quick-acting Mercury replenishes most of the benefits lost, I would call it a good change. Also, Mercury is more compatible with Saturn than Mars is, in most points. So, overall, this is a good thing, and will make things easier. We just need to discipline ourselves in action. Neither will we be forced to act, nor will we feel compelled to act. We have to decide to act, and discipline ourselves in doing so.

The two Lovers having fun:

But, overall, what will hue, in my opinion, the most this period, distinguishing it from the waxing Moon one, is the hexagon between Venus in Capricorn and Mars in Scorpio. The two lovers – both supported by other planets – in harmonious cooperation, each from a friendly zodiac, is a great omen.

This aspect has started being active on the 26th of December and will be active until the 26th of January. It will become accurate on the 9th of the month, when Venus will be in extreme power, as we’ve seen above. Also, during this waning Moon, this aspect will be in its strongest and, in the same time, most auspicious period.

Love life and sex life will become lucky, important and very active. If you are seeking a relationship, act now! Go out, socialise, try to meet new people, use your friends, contacts, the internet. Anything and everything!

Relationships with significant age difference will stop receiving so many blessings from the 4th onwards, but, they will keep receiving the general blessings love life receives.

All forms of arts, receive much energy which encourages us to act, and help us make progress. Until now the “in-home” arts received most of the planetary focus, but now dance, acting, singing and all other forms of art receive, at least, just as much focus.

As Sun and Jupiter play a part in this role, arts, art dealers, artists’ managers, and all jobs that have to do with beauty, health, sex and love will receive a great amount of blessings and luck. If you are in such kind of business, or you intend to start working in these fields, act now!

The luckiest zodiacs of the waning Moon will be Capricorn, Scorpio and Pisces. Cancer, will also receive a great amount of blessings and luck, and so will do Taurus and Virgo. The six remaining signs, Aries, Gemini, Leo, Libra, Sagittarius and Aquarius won’t be unlucky, though. They just receive less blessings. Many, though. Just, a little less.

For your zodiac predictions, please do refer to the New Moon’s zodiac predictions, as they are practically the same. Just remember, the most of the negative aspects will be less strong. Only exception is whatever has to do with psychological health. This is an aspect that needs even greater attention as Pluto now becomes even more active and strong.

Also, do refer to the predictions on the Annual Horoscope for 2018, the Jupiter in Scorpio and the Mars in Scorpio articles for more information.

So, that’s all. Have fun, enjoy and make the most of this waning moon.