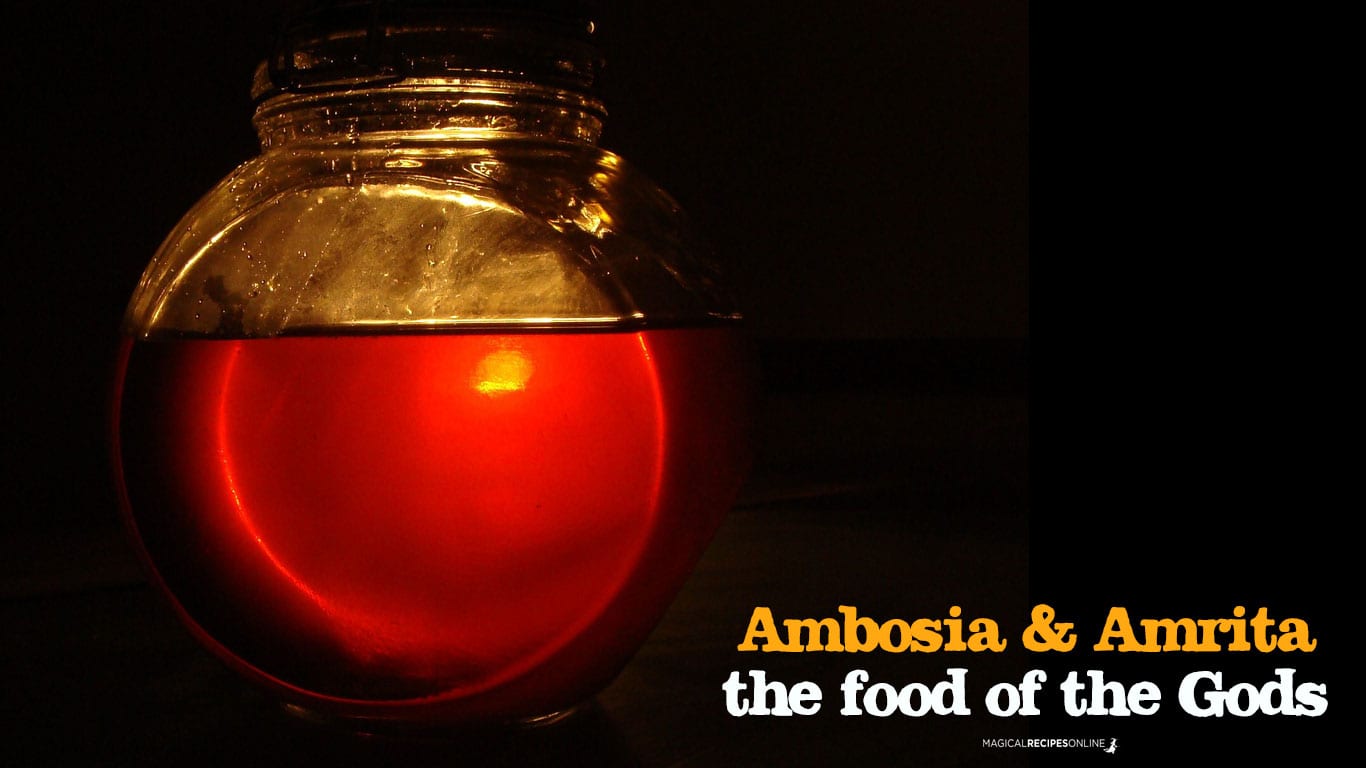 Ambrosia and Amrita are both the food of the Gods, from very different traditions, though. Nevertheless, the similarities these two share, overwhelm their differences. But let’s see them.

In Greek Theology Ambrosia is the food of the Gods. As it is liquid in nature, in later years some describe it as the drink of the Gods. This is inaccurate. The drink of the Gods is, in fact, the nectar. The word Ambrosia (Αμβροσία) comes from the negative prefix a- and the word βροτός (sounding vrotos) which means mortal. Therefore, ambrosia means immortality.

According to Greeks, if somebody ate (or drunk) ambrosia would become immortal. Therefore, it is forbidden to the humans to taste it. Hercules, only after his becoming semi God was given ambrosia to eat/drink some. The same goes for all the immortals that had been born as mortals.

In a version of the famous legend of the Greek hero, his mother, Thetis, anoints the body of the baby Achilles in order to make it impenetrable to any means, and therefore immortalizing it. The body, not the baby itself. Although, the baptizing of Achilles in the Stiga (Στύγα), the river of the underworld, in order to achieve the same result, either by Demeter, or by Thetis, is more popular.

Ambrosia is believed that if applied to the body, would remove the symptoms of ageing, making the person young again. Athena uses Ambrosia in this manner on Penelope, while the latest is sleeping.

Interestingly enough, the Sanskrit word Amrita comes from the negative prefix a- and then –merto which means dying. Therefore, Amrita means immortality. And Amrita is the food of the Gods in Hinduism, and it is also of liquid form. But, what in fact is Amrita?

Lord Soma, except of being a God, is also a plant with the same name, and a ritualistic drink, again of the same name. It is the drink that the Devas drink in order to sustain immortality. As Ganges is a manifestation of Goddess Ganga, and not just a river ruled by the Goddess, so the plant and the drink are manifestations of Lord Soma, and not just a plant and a drink blessed by Him.

The Rig Veda gives us a great deal of information about both of them. Nevertheless, we don’t really know which this plant is. Unfortunately, this information was kept secret and now has been lost. Even the fifth Veda, the Ayurveda, isn’t clear about it.

From the hymns of the Rig Veda, we know that it is a plant growing next to, or in to, the rivers or lakes. We also know that it is a plant of the mountains. It also must be a plant with yellow, or golden flowers, or juice. This would explain the yellow and golden colour given to Lord Soma in some parts of the hymns, while he is considered of white skin in other parts.

We can also assume that the plant is a bush, or a tree, for the priests crush “his many limps” to pour out the Soma juice. These “many limps” are probably the twigs. After all, Lord Soma rarely, if ever, appears with more than 4 hands. Usually with just two. Not to mention that crushing the limps of the God himself would be sacrilege, if even possible. For the same reason, it must be a plant that has enough juice inside its stems.

The priests mix the juice of the plant (alone in most cases, or with more ingredients in a few cases) with cow milk, and thus they produce the Soma drink. The Veda calls the Soma drink as Amrita, too. So Soma, as a drink, and Amrita are one and the same thing.

Contrary to the Greek’s Ambrosia, the drinking of Amrita by the mortals is common use. As Ambrosia, so Amrita gives immortality to the drinker, and the Veda states it for the humans in several cases.

The Amrita in use:

Some parts of India nowadays use the plant Sarcostemma Acidum as the Soma plant. I would guess it has nothing to do with the original plant, both because of its colour and because of its properties. If you decide to use this plant to prepare your Soma drink, be extremely careful. Sarcostemma’s juice is poisonous and caustic.

So, Soma must have therapeutic properties, if not in fact making the humans immortals. It also seems to be quite vitalizing, like an energy drink. Even more, it most probably is psychedelic, and causes a feeling of euphoria and blissfulness. It probably is addictive, as well. Lord Indra and, sometimes, Lord Brihaspati seem to have and addiction to it, after all. Probably, even if we knew which in fact is the plant, the law wouldn’t allow us to use it.

In general practice, honey of blossoms is used as the Soma juice. It is yellowish, it has many beneficial effects to our health and it is energizing. It also helps the emotional balance. Also, different areas use different plants of yellow flowers. Therefore, it is commonly accepted that the juice of any yellow flower can be an efficient substitute of Soma juice.

Theologically speaking, this is very well accepted. After all, magic rituals usually work with symbols, rather than the actual thing. Hindus sacrifice animals instead of the human or humans for whom the sacrifice is done. Christians drink wine and eat bread, instead of human blood and human meat, symbolically to the blood and meat of Christ himself, and so and so.

So, here is how to prepare your Amrita, or Ambrosia if you prefer:

Keep in mind what you are doing. This way the purpose will be infused to the drink, and the Gods will accept it as if it is the real Soma drink.

Warm a glass of fresh, full fat, cow milk to which you have added 9 threads of crocus. It’s not necessary to boil the milk, unless you have just milked it from your cow. While it is still warm, dissolve a full spoon of honey in it. Of course, you can add more, according to your taste.

Wait until it cools down to room temperature. Strain the mixure to separate the threads from the milk and dispose the threads. Your home made Amrita is ready.

How to use Amrita:

Use your Amrita to purify your body, and soul through bathing with it.

Firstly, shower yourself as you would normally do. When you have finished, pour slowly the Soma drink all over your body. For better results, while doing that imagine that it cleanse all negativity from you. Stay in the tub for as long as possible, and meditate, use a mantra, or pray for purification. It would be better to not wash out, but it would be greatly inconvenient, so wash out using just water.

Instead of that, if you prefer, after finishing your shower, fill the tub with water, and pour about a litre (35 UK oz or 33.5 US oz) of the drink. Get in the bathtub. Submerge your head at least three times. Remain in the water and meditate, chant a mantra, or pray a prayer of purification. When you feel ready, empty the tub, with you still in it, and then wash out.

In both cases, wash your bathtub thoroughly as soon as you have finished, for if the milk stays the stink will never leave. Of course, this advice is also for the statues, talismans, and whatever else you wash with Amrita. Practically, you give them a ritualistic bath.

An additional benefit of this ritual bath is that both milk and honey will beautify your skin. Even more, crocus, having antioxidant and anti-ageing effects, will keep it Young and Firm!

Do you want to try an elixir of internal youth and immortality, but don’t like milk? Why not trying our Tea of Immortality and Eternal Youth?

That’s all. Have fun and Be blessed! And why not? Become immortal, as well!