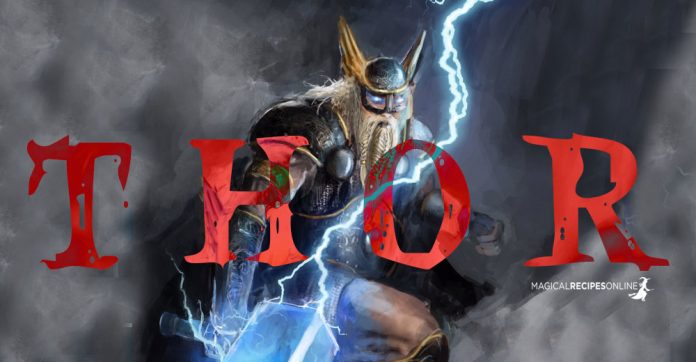 Thor was the son of Odin, King of the Gods, and the giantess Jörd the personification of Earth, while some claim that his mother was Frigga, Queen of the Gods. Thor was one of the 12 Gods that were allowed to sit in the twelve seats of the judgment hall in Asgard (the realm of the Gods) and the Nordic people loved him dearly.

Thor, as opposed to all other Gods, he never rode a horse, instead he had a chariot drawn by two rams(or goats), Tanngniorst and Tanngrisnr, and it is said that from their mouths and hooves sparks always flew. What you may have guessed is that Thor’s sacred dayis Thursday (Thor’s day) and his principal festival is the Winter Solstice while one of his sacred emblems is the Thunder. His sacred tree is the Oak and red is the colour that corresponds to Thor and as a colour of love and passion the marriage rings of the North were usually bound with a red stone.

Thor as a Powerful Deity

Even though a benevolent and protective Deity, Thor was famous apart from his kind heart, great appetite and love for justice, for his inability to hold his temper (especially against his enemies and the enemies of the ones he loved), as he could fly into a terrible rage showing no remorse or any type of logic, especially when he was young. For this reason, his parents entrusted Thor to Hlora (the heat) and Vingnir (the wingedone). They brought him up wisely and managed to teach him how to control his anger. As a recognition for their great contribution to his upbringing Thor is also known by the names Hlorridi and Vingthor.

One can easily observe that Thor embraces both the elements of Air and Fire as he is the God of Thunder. To finish with Thor’s family tree he was married twice, initially with Iarnsaxa, the ironstone, who bore him two sons Modi (courage) and Magni (strength), and afterwards with Sif who was known for her beauty and her amazing golden hair and bore him a son Lorride (similar name to his name Hlorridi) and a daughter Thrud, a giantess famous for both her size and extraordinary strength.

Mjölnir, the Hammer of Thor

Thor’s legendary hammer was Mjölnir (the crusher) and had the amazing power to always return back to his hand, as he really enjoyed hurling it into long distance and crushing his enemies (the poor Frost Giants!).

For encyclopedic reasons, Thor wore an iron gauntlet, the Iarn Greiper that gave him the ability to catch Mjölnir firmly and a belt, Megingiörd, that whenever he wore it his strength was redoubled.

His hammer Mjölnir is a sacred symbol for this Deity and I am going soon to write an article about how can you use it as an amulet and charge it in his name. It is said that his followers was making the sign of the Hammer before Christians replaced it with the sign of the Cross in order to bless, protect and remove any negative and evil influences. The hammer was used in order to cast the boundaries of ones property, to bless a marriage and was added in the funeral pyre as a symbol of courage and strength that death cannot break.

A Prayer for the Earth (By Davina Mackail)