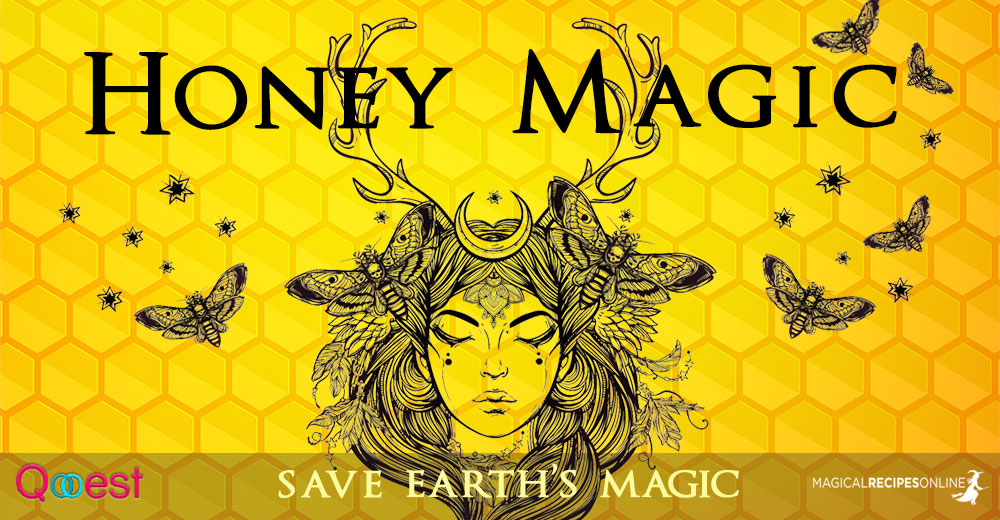 Honey, that golden sweet and odorous liquid food, a treasure for healthy living. Honey is probably the oldest sweet substance humans ever tasted. As species, we begun our search for (more and more) honey at least 8000 years ago as we can see clearly on rock carvings at Araña Caves in Spain. It is not wonder the Honey Magic is considered that powerful.

Honey is produced by bees using nectar and pollen from flowers. This is why every honey is different as the final “product” depends on what type of plant bees will “visit” to collect their pollen. And this is not an easy job. They may have to fly over 50.000 miles in order to “produce” about 1lb of Honey!

No wonder why they are so protective over it! Bee, an insect so sacred that Zeus Himself, the All-mighty Olympian King of Gods, blessed them by granting their sting to be protected from Men. Well… Zeus turns out to be more fond of Men and then he “added” the fact that once a bee uses her sting, she loses it forever along with her life. Read more about the Bees and their Magic here!

There are many important stories in the Greek Pantheon which underline the importance of this magnificent creature. Apollo, God of Magical & Medicinal Arts along with Divination, was believed to have Mastered the Art of Prophecy with the help of three Primordial Nymphs who were also identified as Bee Goddesses, known as Thriae (θριαί). Those Nymphs nurtured Apollo as an infant and later became his powerful Priestesses. This is also why the Priestesses of Apollo were also called “Bees”.Aristotle loved to say that honey is “dew distilled from the Stars and Rainbow”.

In ancient Egypt, honey was considered a sacred offering (probably its rarity played a decisive role) used to sweeten cakes and biscuits, and was used in many other dishes. Ancient Egyptian and Middle Eastern peoples also used honey for embalming the dead.The fertility god of Egypt, Min, was offered honey.

Honey Magic and an Offering to the Gods

Honey was a powerful offering to the Gods.  The hexagonal shape of a typical honeycomb relates to the Number 6, a number sacred to Aphrodite (Venus) as Pythagoras proclaimed in his doctrine of Numerology.

Bees were considered the souls of dead priestesses. The sacred Geometry of honeycomb correlates to the Wisdom that the Universe was built upon. Therefore, honey, is the divine essence of cosmos, Life. In honey, energy is so intense, it’s alive!!! Honey is used in creating Sabbat & devotional deserts, as it is considered a sacred substance, proper for celebrating holy and powerful days.

Honey is so potent that has been revered by Witches as it assisted them greatly to achieve anything they want. Honey is a diverse magical ingredient which can be used in many spells and will enhance the results. An interesting lore suggests that certain types of honey possess magnified abilities when incorporated in related spells. So a Mage/Witch can use a certain type of Magic to empower his/her power, another type to call for love and another one to banish and protect. Let’s have a look at the list below:

Popular in the Mediterranean countries, it is considered to give courage and build self-confidence. Eating Honey from Thyme help us cleanse ourselves from jinxes and strengthens our aura against malevolent attacks. Thyme Honey is also believed to be adored by Fairies.

This type of Honey is believed to be extra potent when used in Magic and spells. It is considered a powerful instrument of the Witches and it is also believed to grant Magical Powers to the one who ingests it regularly.

It”s one of the most favourite types of Honey worldwide. Acacia”s powers are passing into this Honey and allegedly helps banish insomnia and nightmares as it stops all evil influences. Ingesting Acacia’s honey is believed to restore your Vital Energy which was drained by the Evil Eye or Malevolent attacks.

It is produced in New Zealand by bees that pollinate the Manuka bush and is considered one of the most unique and beneficial forms of honey in the world. Manuka Honey is used in healing spells of the Maori tribe. You can try dedicate some Manuka honey to the spirits and angels of Healing.

Pine Honey is a very popular honey all over the World. Pine honey should be used by anyone who feels his or her energy at low levels. Pine’s magic is intense and used for rejuvenation. Moreover Pine will help you not only recharge your “batteries” but also protect you from anyone who wants to vampirize on your powers. Pine Honey should be used when we feel we are under demonic or other psychic attack.

Flower honey is honey produced by bees that pollinate the wild fields. In facts it uses any flower available thus Flower Honey is drenched with the power of Spring. Flower honey is perfect when Spring is what need to “happen” in your life. Flower honey helps us get in touch with beauty, love and the child in us! Use Flower Honey in spells for Love, Friendship and Happiness.

Eucalyptus honey is not that common. However, if found it would be an excelent tool for Healing and Uncrossing spells. It is more powerful than Thyme honey in uncrossing rituals & Pine honey in healing rituals. However, use Pine honey when you are under attack and Thyme honey for general protection. In healing spells start with Pine Honey (if your “energy” hits critical levels) and continue with Eucalyptus as it”s milder but more effective in long-term use.

Types of Honey and their magical Properties and powers

Rosemary Honey is extra potent when dealing with Beauty and Love spells. Rosemary honey can also be used in healing spells but mostly to heal our inner selves. What causes all this trouble in my life? Rituals employing prophetic dreams and self-healing could be more effective with use of Rosemary Honey.

PREVIOUSWhy Three times is the Charm? What is beginner’s Luck?
NEXTPearls and a pearl spell for Wealth