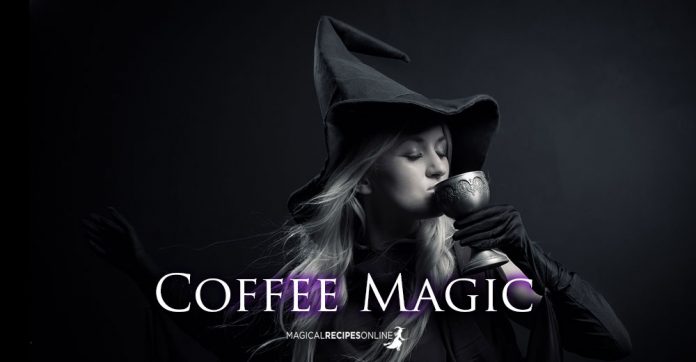 Coffee is one of the most favourite brewed drinks. Billions of people incorporate the small ritual of drinking this black potion in their morning routine. The smell of the ground coffee is what triggers many people to wake up and face whatever have or have not planned for the day. Coffee Magic is one of the most common rituals worldwide.

Many legends have been documented surrounding the first use of coffee. One of the most famous stories dates back to the 9th century when a pilgrim (or priest) observed a camel (or a goat by other accounts) acting strangely happy after eating some weird beans. Allegedly the pilgrim identified the beans and tasted them himself making the first coffee drink.  Although this might be just a myth, drinking coffee surely dates back at least on the 10th century C.E. when the first trade of coffee beans begun in Constantinople, Cairo and Damascus. The first use of coffee though probably originated from Ethiopia.

Drinking Coffee was part of Islamic religious practice and and rituals of Sufism. At some point, it was widely believed that Coffee was a divine gift given straight from Archangel Gabriel himself to human race. Coffee was featured in many ancient medical manuscripts and it was believed to cure many diseases if a magical coffee potion prepared properly.

Coffee has a very rich occult history with numerous accounts which date back to the dark ages. When coffee made its appearance in the Western Europe it was quickly labeled as the “Satan’s drink” probably due to its vast occult use, to its popularity in the Muslim population or maybe due to its aphrodisiac properties. Eventually thought, coffee knocked St.Peter’s cathedral door in the Vatican city. Pope Clement VIII (1536-1605) was the first one who tried it. Amused by its taste, Pope decided to baptise the Coffee beans, abolishing its dark energies, thus declaring it a blessed drink! (TAKE THAT SATAN ! ) By this time, Coffee shops sprung everywhere in Europe making it the most famous drink.

You can thank Pope Clement VIII because he blessed our favourite drink, thus permitting its use in Europe.

Coffee has aromatherapeutic abilities. The smell of it is enough to energise the brain and clarify the thought. Probably not as strongly as if you also drink it, but sufficiently enough. Also, its aroma is considered one of the most rapidly acting antidepressant smells. We’ve seen an aromatherapeutic “prescription” against depression here , but when you need an instant fix, just smell some coffee – the grounded beans or the drink.   It has also been used in divination in a way similar to tasseomancy.

And then, as mentioned it has many magical powers. It is mostly under the influence of planet Mars, and as so it amplifies the power of every fiery spell, but it is very cooperative with the other elements as well. It will give more speed to an Earth-element spell, will empower an Air-element spell and it can work miracles with a Water-element based spell easily, when most combinations of Water and Fire elements need great caution and experience in order to work properly.

Alchemists have long prepared special witchy blends, where coffee beans have roasted in rituals with sacred herbs only to empower the magical energy of the coffee. There are not many magical blends available in the market although soon you will be able to buy one from our Magical E-shop. This is why, Coffee is usually “served” as libation for Gods and Goddesses, especially in the Voodoo tradition, where coffee is usually offered to Chango the male Orisha of fire and Baron Samedi, the male Loa of Sex and Resurrection. (Click here for more information about libation and magical offerings)

Remember, coffee is a very capable repellent of vampires, hungry ghosts, and other vampiric and parasitic entities. It can also help us cure our vampiric habits if we have any (for instance if we subconciously and unintentionally drain the energy of the ones around us – family, relatives, friends etc).

As a Chi amplifier it is always useful for health and healing magic. Be cautious though in using it for health issues which are caused by excessive Fire, such as high fever. In such cases you need firstly to remove the excessive Fire and then, if needed, to offer some new, healthy Fire to empower the immune system and the natural healing ability.

Coffee is also a lust amplifier and so, it can be used in spells to enhance libido, sexual activity and sexual luck. It can also be used to empower a man’s erectile ability. For women who aren’t able to enjoy sex, smoke with burning coffee a magnetic haematite and then let it rest on the sexual chakra for half an hour. Repeat the procedure daily and enjoy the results. Natural haematite is magnetic, but it is usually de-mgentised. So most of magnetic haematites you can find are technically re-magnetised. If you can find a natural one, it will work better, but any magnetic haematite will work.   And these are only a few of the spiritual and magical properties of coffee!