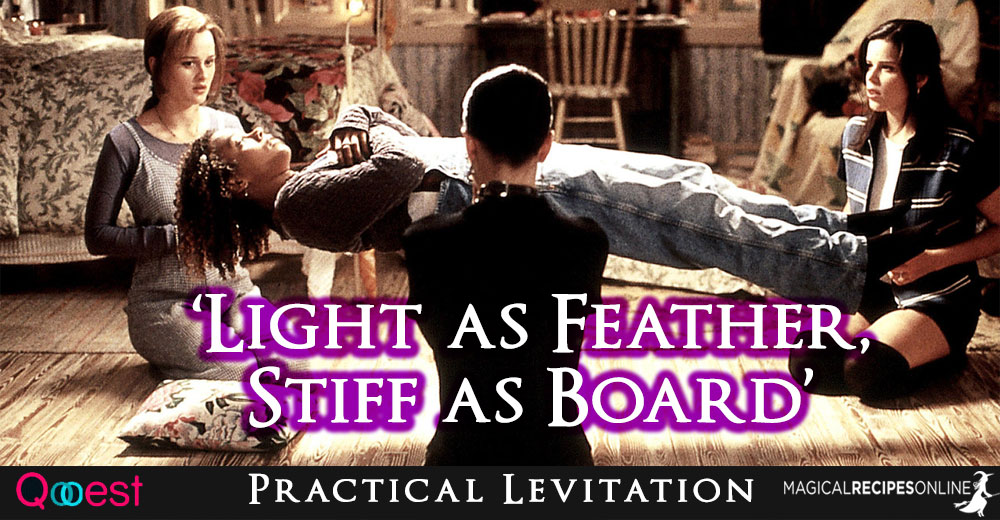 There’s a party ‘trick’ I’m pretty sure we’ve all played at some point. “Light as Feather, Stiff as Board”. Well, let me tell you my experience first, because this is not a trick but Practical Magic. I’ve been drinking with some friends at my early 20s and one proposed to play this levitation ‘trick’. They explained me how it works and – yes – it sounded pretty ridiculous. It’s worth to mention that I had not watched ‘The Craft’ Movie by that time. If you have not watched it yet, do so. It’s AMAZING.

“Light as Feather, Stiff as Board”

But I said, what the heck. Why don’t we give it a try. I truly believe – and I believed it back then too – that when so many people gather thirsting for magic, Magic Will Happen!

It was a summer afternoon and it was getting darker. The Sun was setting and we were outdoors in the woods near my best friend’s country house, breathing the light breeze coming from the tall mountains around us. The scenery was so perfect, we actually thought that we were breathing magic. I truly believe, that anything would be possible at that time. Not only levitation. ANYTHING.

So, one of our heaviest friends sat on the stairs and four other men (including me) circled him. We tried the “Light as Feather, Stiff as Board” and it worked instantly. It was amazing. I felt the power in my hands. We were amazed. One of our friends even got scared and pulled his fingers. Our muscled friend landed heavily on the stairs making a painful noise while he gained a nice big bruise. At this moment, I was sure that this is no trick. Something happened back there.

It goes without saying that we tried it several times this night. And we tried it the next night too. Always with different people. I even had the chance to levitate. YES. I LEVITATED!

It was amazing. Watching yourself been lifted in higher, leaving the ground. I was thinking ‘why on earth isn’t this the most popular thing’ and ‘why no scientists have not ever observed and experimented on it?’ Of course, they did and the knowledge is restricted to small circles.

Few years later, after I met new friends, who were actually mages and witches, I told them about the trick. We decided to try it after a ‘seance’ with some spirits. We were 5 practitioners. A part of me wanted to ‘show off’ although I mostly wanted to see the look on their faces and taste again this ‘practical magic’.

But it failed. We tried again. It failed again. Why? I think I know the answer. But let’s see the Levitation ‘trick’ here and how it works…

Practical Levitation. How to Perform it.

Why Levitation NOT always work:

Have you tried it? Tell us your experiences.