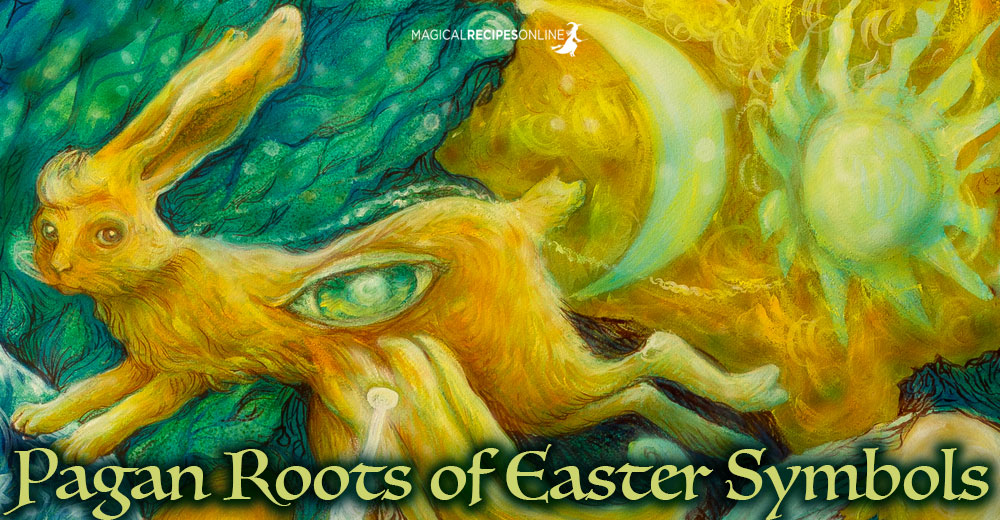 Spring time begins with the Sun entering Aries. It usually happens between March 20th-22nd. This is the Day of Spring Equinox – for the Northern Hemisphere. Spring Equinox is considered one of the Most Powerful Days of the Whole Year and one of the 8 Sacred Shabbats of Pagan Calendar.

The fluffy and – usually happy – Easter Bunny is also called the Easter Rabbit or Easter Hare. It is a christianized symbol of Easter, commonly depicted as a rabbit bringing red Easter eggs. As mentioned above, it is also referred to as  the “Easter Hare” who played the role of a divine judge – equal to Santa Claus of Christmas, evaluating whether children were good or not.

It first appears as a Christian figure around 17th century in Germany. Why? Because it just never stopped to pop out as a symbol of Spring time. Bunnies, Rabbits – Hares, are symbols of Mother Nature’s abundance and fertility, a sacred animal of Eostre/Ostara – popular Goddess of Spring. Hence Easter Bunny, is a newly christianized – originally Celtic’s origin – symbol, which seems to endure time.

Calculation of the Day of Easter

The date of Easter is calculated as the first Sunday after the first Full Moon occurring on or after the Spring Equinox. Alright, if this isn’t pagan then what is?

Equinox is misplaced on Julian Calendars. So usually the Gregorian Calendar marks the Equinox on March 22 whilst the Julian on April 4. Hence, Easter day does not always fall on a the same day for Catholic and Orthodox Churches.

According to the Christian folklore, the red eggs symbolize the blood of Jesus Christ which colored them after crucifixion. Moreover, as the eggs have the potential of life, it also hints, Jesus’s Resurrection.

However, eggs are a very significant symbol of life, which associates most Pagan traditions. Let’s see few.

Christians usually bake special Passover Cakes to celebrate their sacred day. They are prepared during the Holy Week yet they are eaten on Sunday of Passover, due to the fasting which is very common.

PREVIOUSTelepathy: How to Read Someone’s Mind
NEXTButterflies as Omens – Their Colors and Meanings if You Spot them