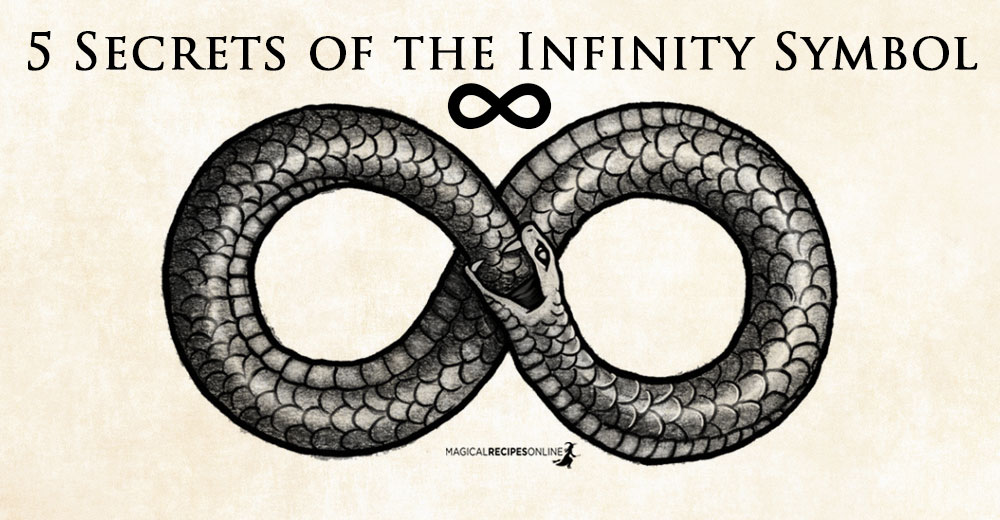 Maybe one of the most popular and widespread symbols in both science and occult arts. This symbol is plain, yet mysteriously beautiful. Moreover, its magical wisdom is hidden because of its tremendous power, which is no other by the power which lies in you! So, let’s take a look at the importance and the meaning of the Infinity Symbol.

NOTE: The Article reflects the teachings of the High Priest of the Sacred Phoenix. Do not copy without permission.

Where does the Infinity Symbol come from? ∞

It goes without saying that modern encyclopedias do not explain anything about the rich and magical history of this amazing symbol. According to conventional knowledge, the Infinity Symbol is just a mathematical symbol used in all sciences, physics, even in html coding. However, there is plenty of symbolism which if understood, we can change our lives.

And this is why I want to start with this.

What very few people discover (or remember) is that the symbolism of the Infinity comes from the great Uraeus, symbols of the Goddess Wadjet. The Uraei (plural) is commonly known as the symbol of power, worn by pharaohs or gods and goddesses. During the coronation of the pharaohs, one was not a king or a queen until they were crowned by this divine snake. What this symbolic act represents, is that one will never have true power until s/he realizes the divine power within.

What is less known is that the same symbol is found in two depictions. Hence, the Uraeus is either mehet or iaret. Mehet means ‘the coiled one’ and iaret means ‘the risen one‘. Both snakes symbolically assume the ∞ position with one exception. 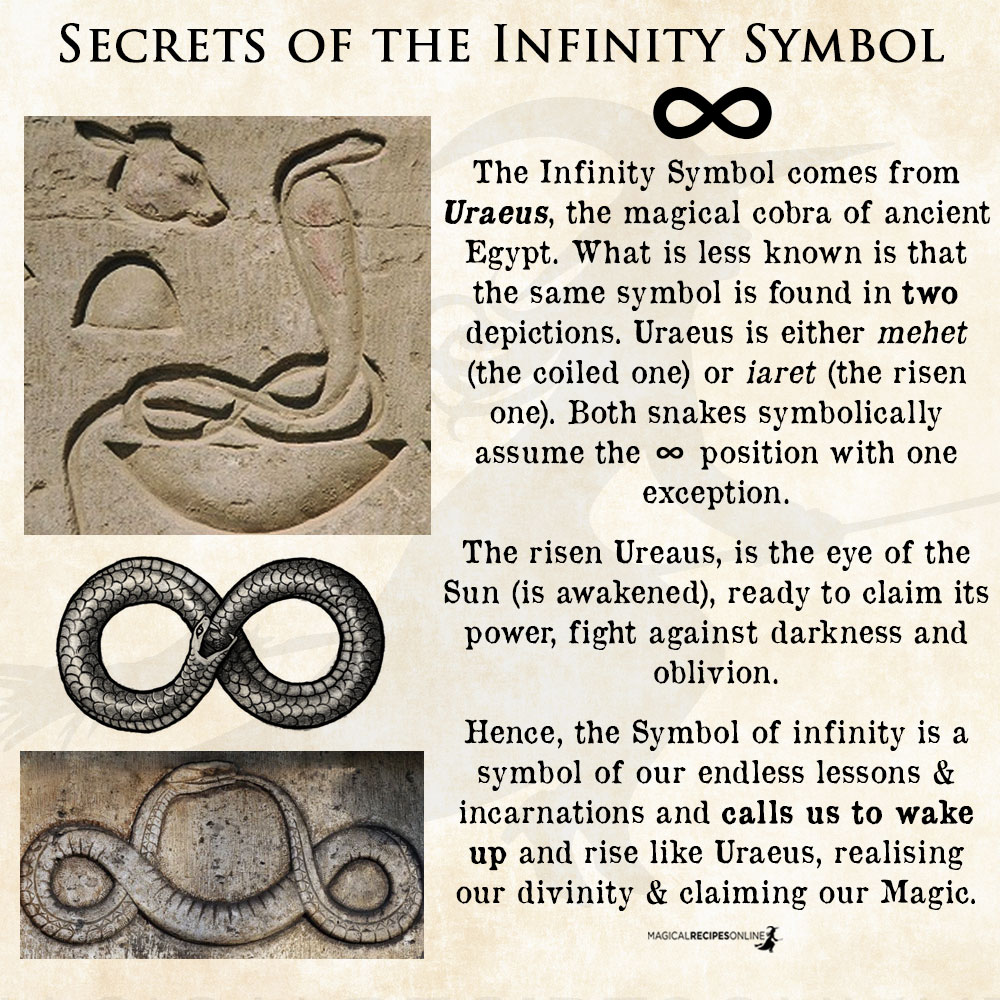 What you can now see is that the risen Uraeus, is the one who messes with the perfect symbol of ∞. Furthermore, the risen Ureaus is the eye of the Sun, ready to claim its power and defend what needs to be defended. Thus, it is ready to fight against darkness and oblivion. Hence the Iaret Uraeus has risen up and is awakened!

Mehet Uraeus (the coiled one) is simply Ouroboros. The secret teaching is that we are bound to repeat our incarnations as we stick to this Realm. A Witch (meaning an awakened one) should realise that this Life offers all kinds of experiences which should be received as lessons for the Awakening. Once we have been awakened, we can end the circle of infinite incarnations, exactly as many ancient religions teach like Hinduism and Buddhism. 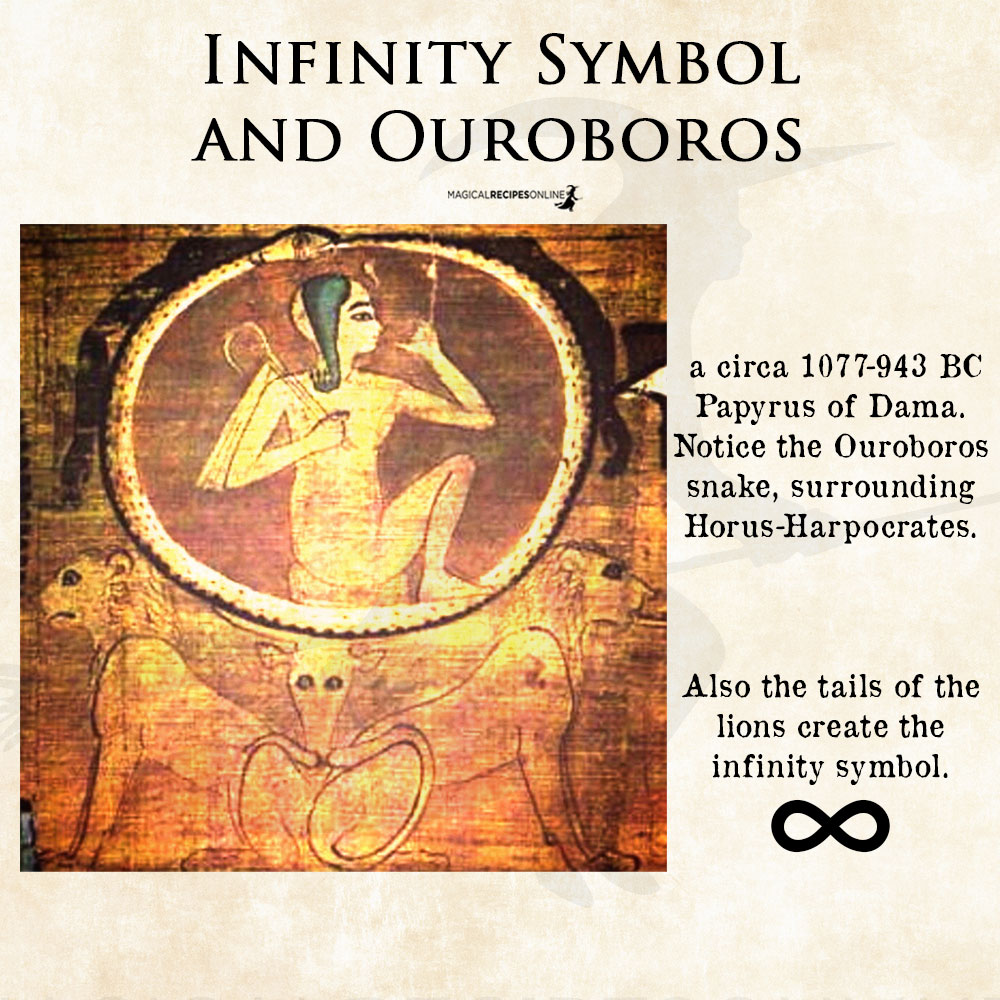 As we’ve already seen, Ouroboros has been used to symbolise the eternal life and the following incarnations.

Hence, Ouroboros is not a simple of evil as many fanatics proclaim. It merely symbolizes the lessons of this plane (which frankly are sometimes pretty hard).

4. The divine Blessings of Nile

Wadjet is also the goddess of the river Nile. Nile, in ancient Egypt was not just a river. It symbolized all the blessings and the divine gifts descending from Gods. Moreover, Nile was a “mirror” of the Milky Way, reflecting the blessings of beyond this Earth, beyond this Realm. Interestingly, Nile was also linked not only to this Realm, not only to Space but also to the afterlife. As certain astrological alignments take place, the Gate of the Underworld opens or closes. But we will talk about this in future article!

This is something more scholars agree on. The symbol of infinity, is derived from the letter omega which is the last letter of the original alphabet – the Greek one. Let me remind you here that in Christian iconography, Jesus Christ is symbolically depicted as the Alpha and Omega (A & Ω) which is the beginning and the end (of the time). However, as God and time is infinite, the letter Omega (ω) became the infinity symbol, to denote the continuity beyond the End (∞).

PREVIOUSMeet Amabie – the Pandemic defeating Yokai (Spirit)
NEXTGreek Gods and Goddesses have a message for you!