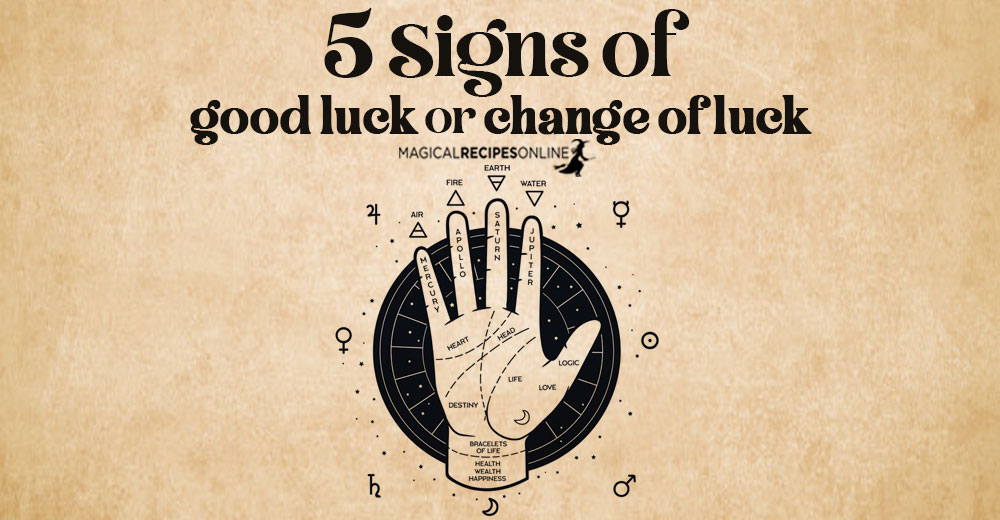 It’s no wonder we love signs and omens. We’ve been through this Art of Omens many times before. That’s because Palmistry is a very powerful source of valuable information. It gives us insight for both our physical and our eternal body. For the first time, we gave you also a list of 5 important palm signs which indicate a powerful born witch. There are also some Palm signs which can help us understand more about our Romantic life and our future marriage(s) – see more here. Moreover, there are signs which show us where are we good at. Both our talents and inclines “carve” peculiar palm signs. So does our Luck. Hence, we give you 5 Palm Signs of Good Luck, or Change of Luck.

What is Good Luck?

These palm signs show a tendency to ‘magically’ overcome difficulties. As if some force is guiding you through hard times, secretly advising you. Like a beacon of light guiding you through the thunderstorm. So let’s begin with your 5 Palm Signs of Good Luck, or Change of Luck.

Amongst the Palm Signs of Good Luck, this certainly is one of the most important. But let me get this clear. It doesn’t mean that you’re born a princess, or something. Yet it shows clearly the potential to overcome initial obstacles, in your early life. Typically, those with the fish sign face a certain difficulty – when young – and this transforms them into “a fish”. Hence, they become nearly invincible, and good luck will show them the way to succeed in their lives. Let’s all remember that Aphrodite and Eros, once transformed into fishes in order to escape the Titans. Exactly like that, you’re blessed with the same ability. To escape the dangers, and live happily ever after.

You may have already noticed that the Fish looks exactly like Othala, the Rune of the Northern Europe. Othala actually means inherited abundance, heaven on earth. Exactly like that, the one who bears the mark of the fish, has inherited the potential to create a heavenly life on Earth. Once again, it doesn’t mean this will come challenge-free. However, it means that s/he will ultimately overcome life’s difficulties, and succeed! 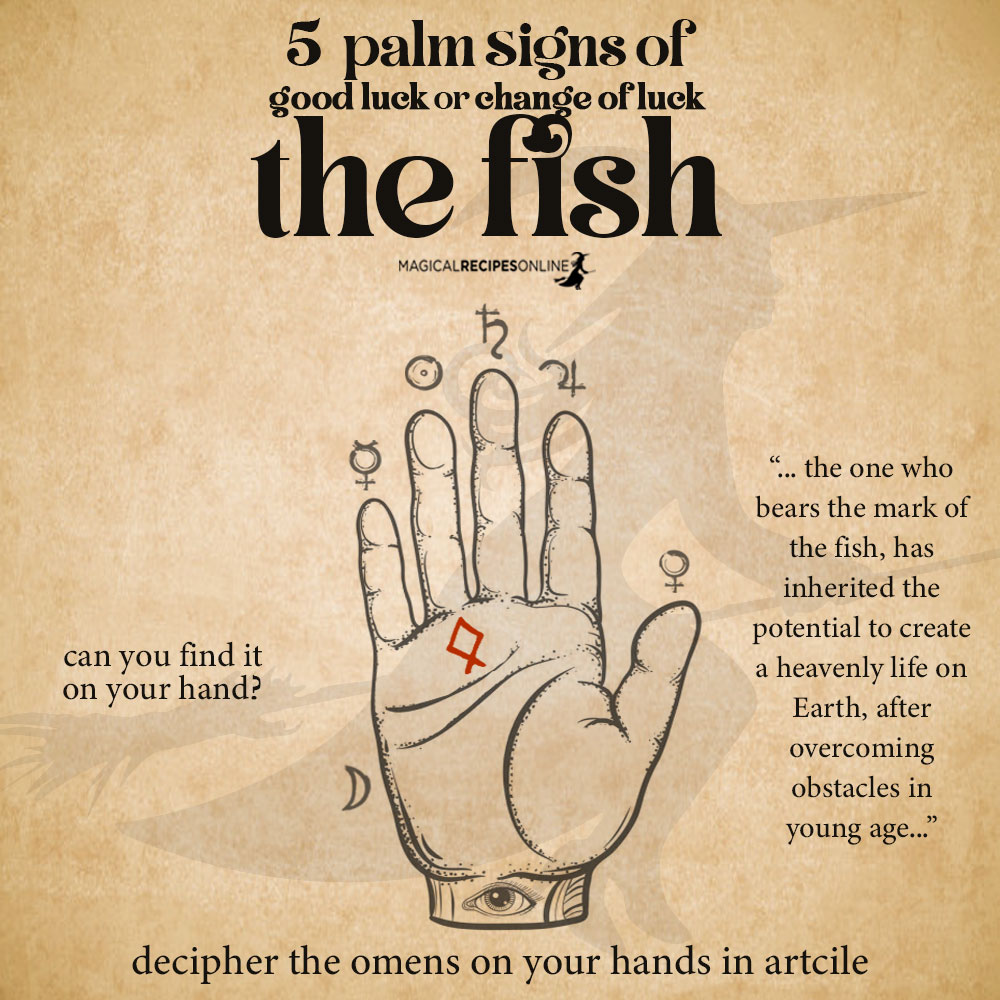 Location of the Fish

Now, it is very important to see clearly where is located. If for example the fish is located on the ‘mount of Jupiter’ is believed to be extra potent and it foretells of great success and fame. Under which finger is the ‘fish’ located?

The Stars have always been considered omens of divine help. Hence, a star like the one in this picture shows a magical beacon of divine energy helping you. Moreover, some believe that once this star is shown expect a great breakthrough – success in less than half-a-year! 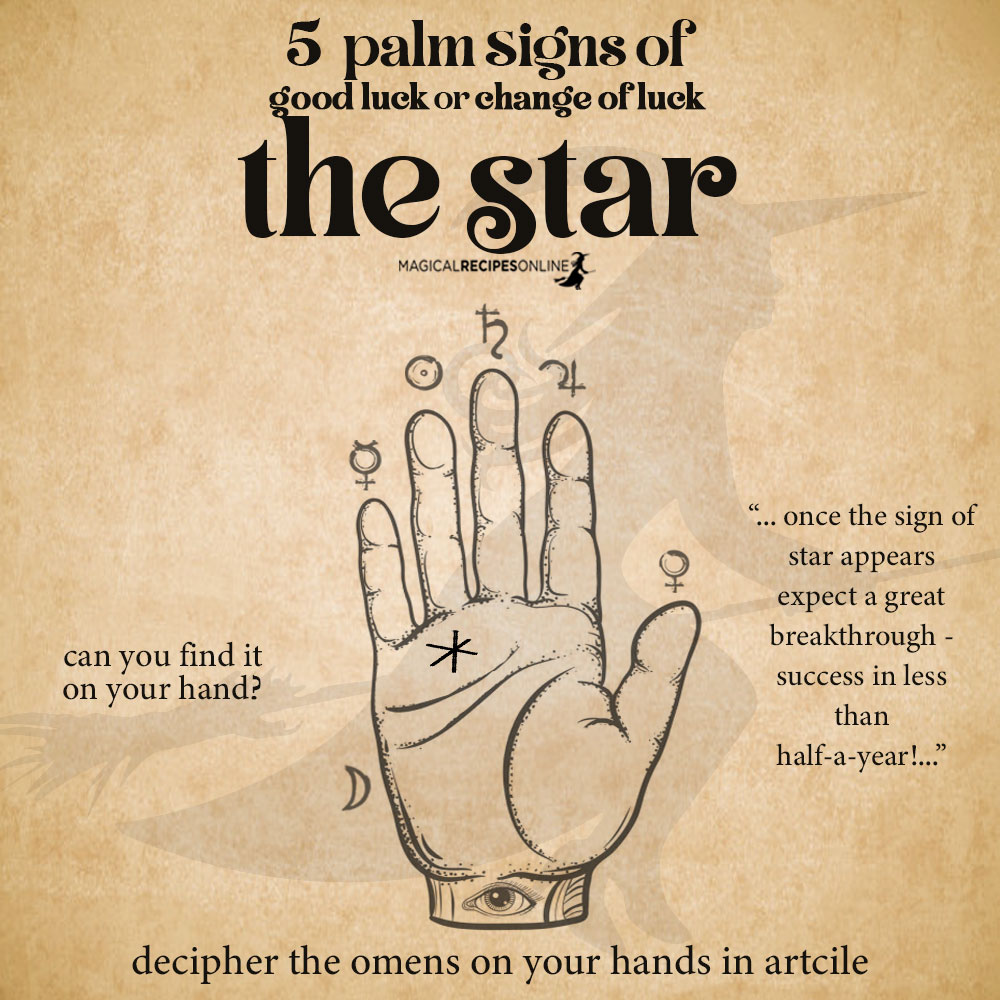 Location of the Star

Where you will be successful at depends, of course, on where this Star is located. Therefore, if the star appears on:

The Turtle has always been considered a lucky sign, amongst the alchemists. As Paulo Coelho mentions, if you see a turtle on your road this promises good luck in your way. Furthermore, the Black Tortoise (Turtle) is the Guardian of North, one of the sacred 4 animals of the 4 directions. North represents the Element of Earth and, hence, abundance. If the sign of the Tortoise appears in your hand, it is considered that luck will follow you through your life. Hence, even if you don’t do pretty much anything, a divine force will still guide you through abundance. 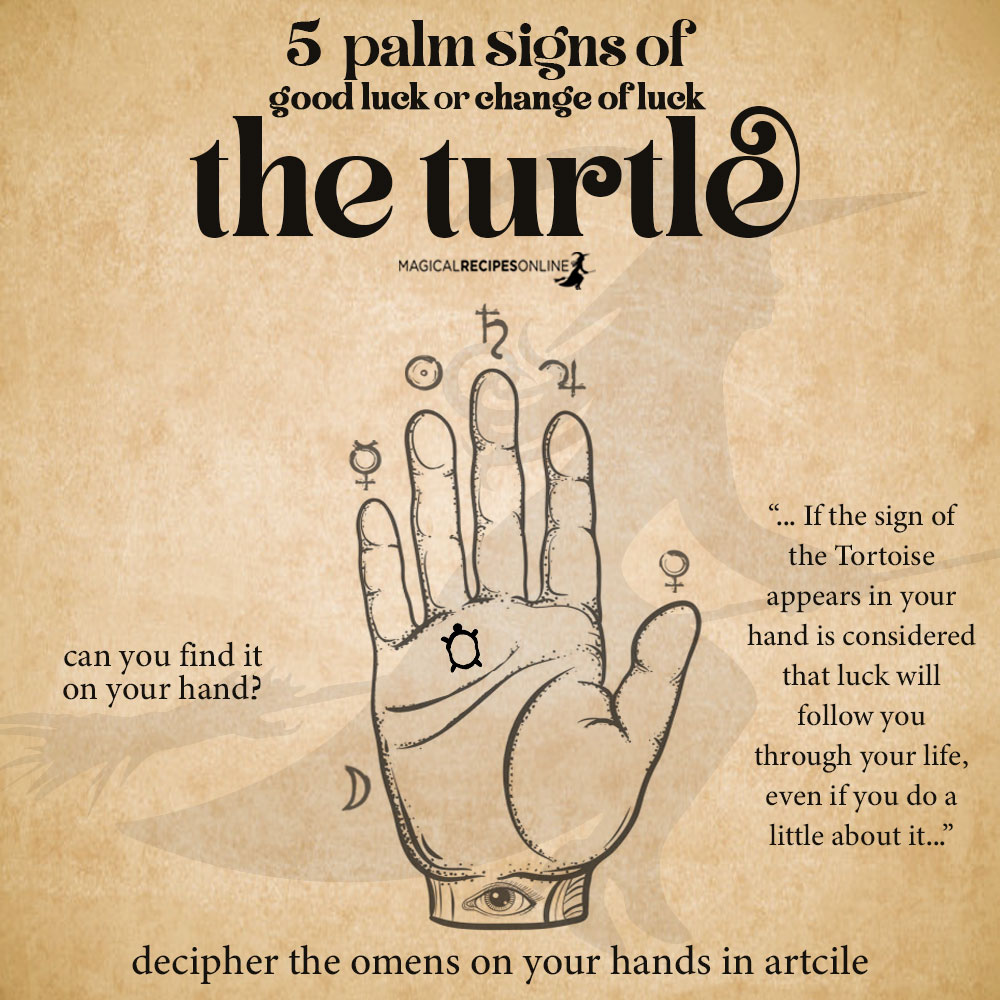 The Trident is a sacred symbol of Power in many cultures like the Hindu and ancient Greek religion. As we’ve explicitly described in our detailed article on Trident, as a symbol of creative and masculine power is the ‘weapon’ of Siva, one of the 3 major Gods of Hinduism and of Poseidon (Neptune), god of all Seas. Hence, it’s more than just a good symbol, it’s divine!

Moreover, the symbol of Trident on your hand looks exactly like Algiz, the rune of the Northern Europe. This symbol represents life and divine protection. 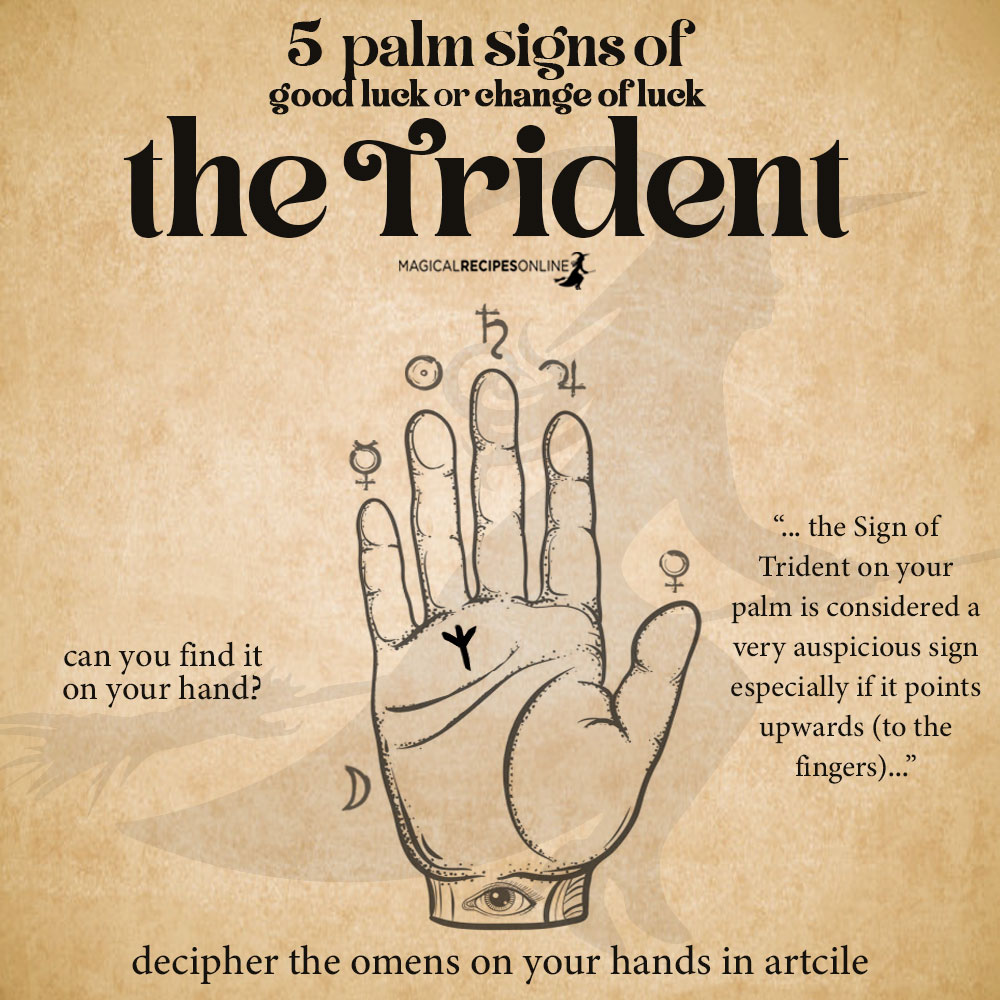 Hence, the Sign of Trident on your palm is considered a very auspicious sign, especially if it points upwards (to the fingers). However, even if it points downwards it’s still a symbol of good luck, but not that clear. It seems that this person usually neglects, or is not able to perceive this power around them.

The Sign of Lotus has always been considered sacred in many different cultures and religions. As seen in our previous articles on magical symbols, Lotus is one of them. Sacred to Ancient Egypt, Ancient and Modern India, Hinduism, Tao and Buddhism, this amazing flower is amongst the favourite symbols of Witches, too. Let’s see why. First of all, the root of this flower lies in the darkest deeps of muddy swamps. However, the root springs and rises to the surface where it blooms greeting the rays of the sun with a wondrous scent. 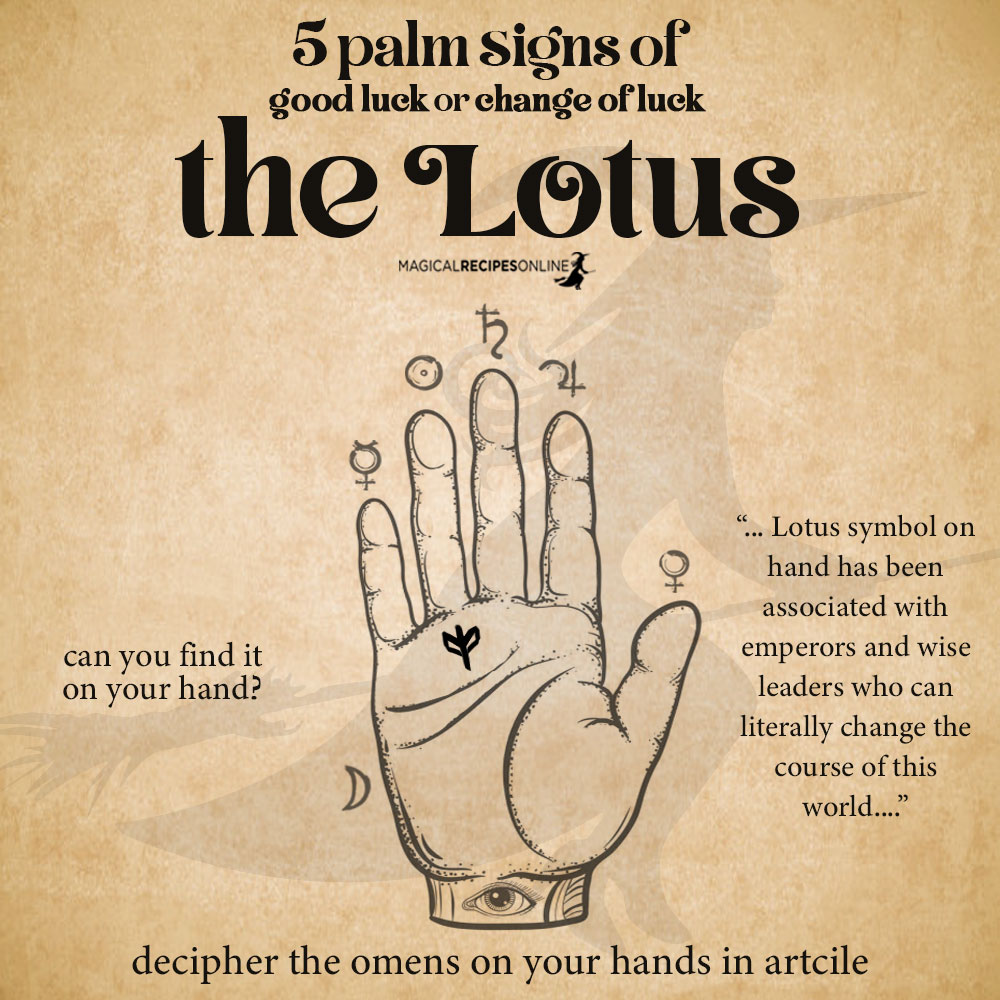 Lotus symbol on hand has been associated with emperors and wise leaders, people who can literally change the course of this world. Hence, the one who bears this symbol is considered to be blessed by fate and Cosmos. Furthermore, it denotes higher levels of existence and an enlightened soul; one who can affect others around them.