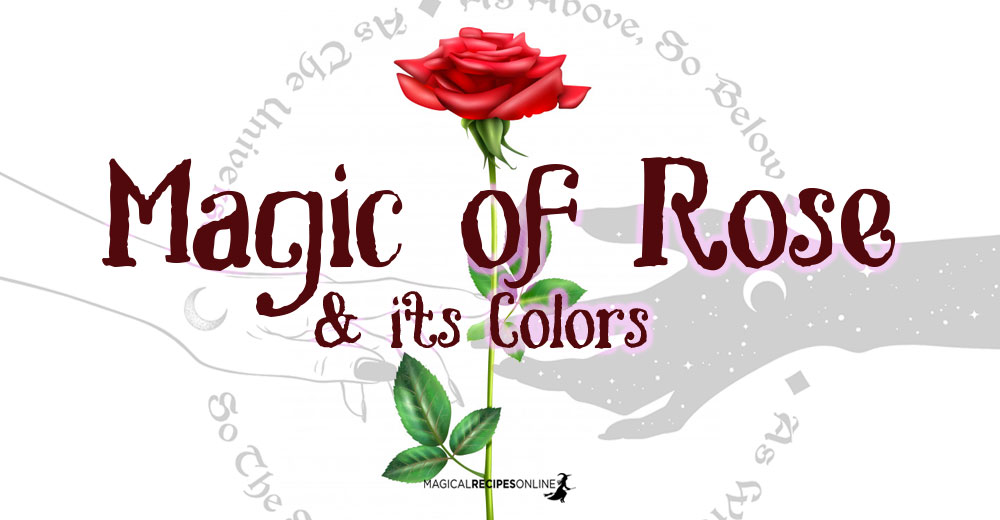 There are only few herbs whose references can be compared with what is written about the Rose throughout the centuries. Even fewer are the herbs that its lore is connected so much with love and beauty. Magic of Rose is both associated with Beauty and Love and as long as Occultism itself. Numerous myths, uncountable legends and so much lore about (for some) the most beautiful Flower in the World.

Rose is primarily associated with the Goddess Aphrodite / Venus. The most beautiful of the Greek Pantheon is present in many stories regarding the Rose. Moreover, in some the “king” or “queen” of flowers are created simultaneously the moment when Aphrodite was born so that the most beautiful Goddess would see only beauty and smell only the perfect aroma of roses.

In a version of the Legend of Adonis, the handsome young man with who both Aphrodite and Persephone fell in love, is associated with the creation of the Rose. So, the story goes like this. Aphrodite after watching the man she fell in love die in her arms, she mixed her tears with his blood to create the first Rose. However, in other versions of the myth the blood of Adonis creates Anemone.

Moreover, in another Greek legend, when the Goddess of Flowers and vegetation, Chloris (Flora in Latin), saw one of her nymphs dead, she tried to turn her into a beautiful flower. Then, aphrodite came to help Chloris granting the flower its unprecedented beauty. Dionysus also came to help, granting the Flower its nectar and the intoxicating scent. Zephyr, the West Wind, married to Chloris, blew the clouds away so that Apollo, the God of Sun could shine brightly making the Rose Bloom.

Rose is also associated with Isis, the most significant Goddess of the Egyptians, Goddess of Magic, wisdom and Love. Moreover, the hieroglyph which depicts the rose has an additional meaning describing a gateway. Isis is the Goddess of Love and Beauty but also a Goddess of Mysteries and Magical Knowledge.

More Magic of Rose in the New Religions

Furthermore, in Christianity the five-petaled Rose is associated with the five wounds of Jesus Christ and with Virgin Mary (especially the thornless ones). Roses are given as gift and proof of Love during St. Valentine’s day. The rosary is associated with rose by many ways. Also, the first rosaries where made from hardened rose petals and some rosaries where scented with rose.

In Islam the rose has a really significant role in decorations, symbolising the Truth and Love.

The Magic of Rose in Hermetic Orders and Alchemy

In Hermetic Orders the five-petaled rose is associated with the Pentagram – Pentalpha. The order of ‘Rose and Cross’ also knows as Rosicrucianism is one of the most significant hermetic orders, associated with occultism and freemasonry. Thus, the symbol of Rosicrucianism is the Rosy Cross, where the Rose is White and Cross is Golden. The Golden cross symbolises the human body and the White Rose the human consciousness.

The Magic of Rose in Hermetic Orders and Alchemy

In Hermetic Orders the five-petaled rose is associated with the Pentagram – Pentalpha. The order of ‘Rose and Cross’ also knows as Rosicrucianism is one of the most significant hermetic orders, associated with occultism and freemasonry. Thus, the symbol of Rosicrucianism is the Rosy Cross, where the Rose is White and Cross is Golden. The Golden cross symbolises the human body and the White Rose the human consciousness.

In alchemy the rose is a symbol of completion, accomplishment and ultimate perfection, a point of unity between Life and the Cosmos. The Garden of Eros (cupid in Latin), the mystics’s cosmic tree and symbols of Aphrodite are associated with rose.

This is used to dominate a situation. When things seems uncertain and security is needed, witches use purple roses to bring balance and equilibrium. In other words, when you need to have ‘upper hand’ in a situation, Purple Roses are used as they enhance our inner power.

The ancient Greek doctors used roses as a tonic potion and Rosewater for beauty elixirs. (click here for Rosewater!) Oils extracted from Roses are used in perfumes since the ancient times, while now we extract the substances geraniol and L-citronellol which you may have already see in most ingredients of cosmetics.

Rose is associated with the Element of Water and Planet Venus.

Rose’s Herbal Magic properties suggest the use of this magnificent flower in:

Keep roses in your home or your balcony. The scent of the roses believed to summon the fairies and positive vibes bringing good luck to everyone near.

Signs you have Witch Wounds!
Free Shipping
Free shipping for orders over $100
Support 24/7
We support 24 hours a day by email
Payment Secure
We ensure secure payment