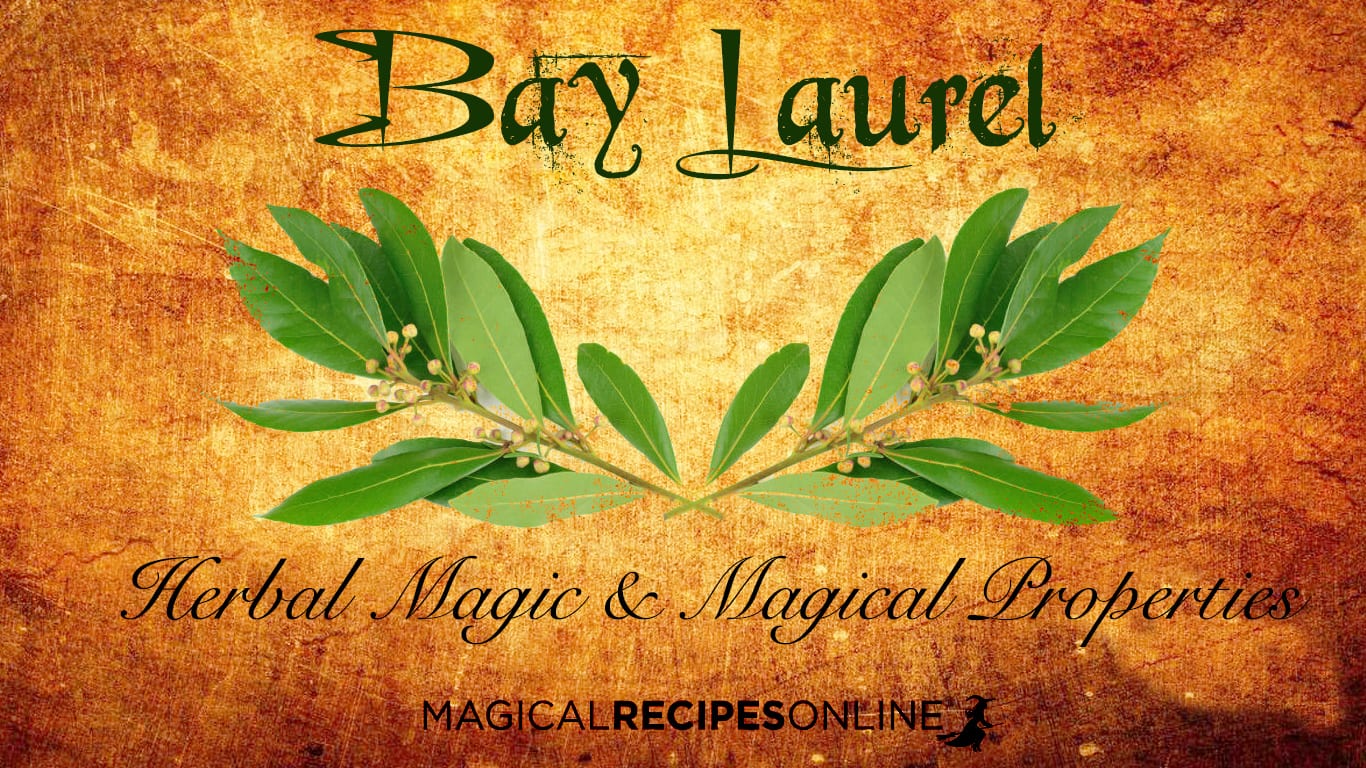 Apollo, the glorious and handsome God of Sun, Arts, Sports, Healing, Music and Prophecies, was once in love with the Nymph Daphne. Due to a quarrel Apollo had with the God Eros, Daphne couldn’t see Apollo as irresistible, mighty and brave as everybody did, and she run for help. Thus, Apollo chased her and Daphne, being the daughter of a great river God, called her father for help. Eventually River God transformed his daughter to the lovely Bay Laurel Tree. From this time Apollo made Bay Laurel tree sacred to him and Bay Laurel leaves sacred to his rituals!

Apollo’s sacred herbs are widely used in Magic for many centuries. Apollo is a Patron God of Magic as is his sister Artemis / Diana. Apollo is connected mostly with the Magical Power of the Sun and Artemis with the Magical Power of the Moon.Apollo”s help was asked for healing, for reversing curses, for Love, for every blessing. Apollo”s mighty power was believed to aid in banishing evil spirits and negative spell breaking. Bay laurel’s leaves are filled with Apollo’s (Sun’s) energy. Creative energy, Cleansing energy, Clairvoyant energy. 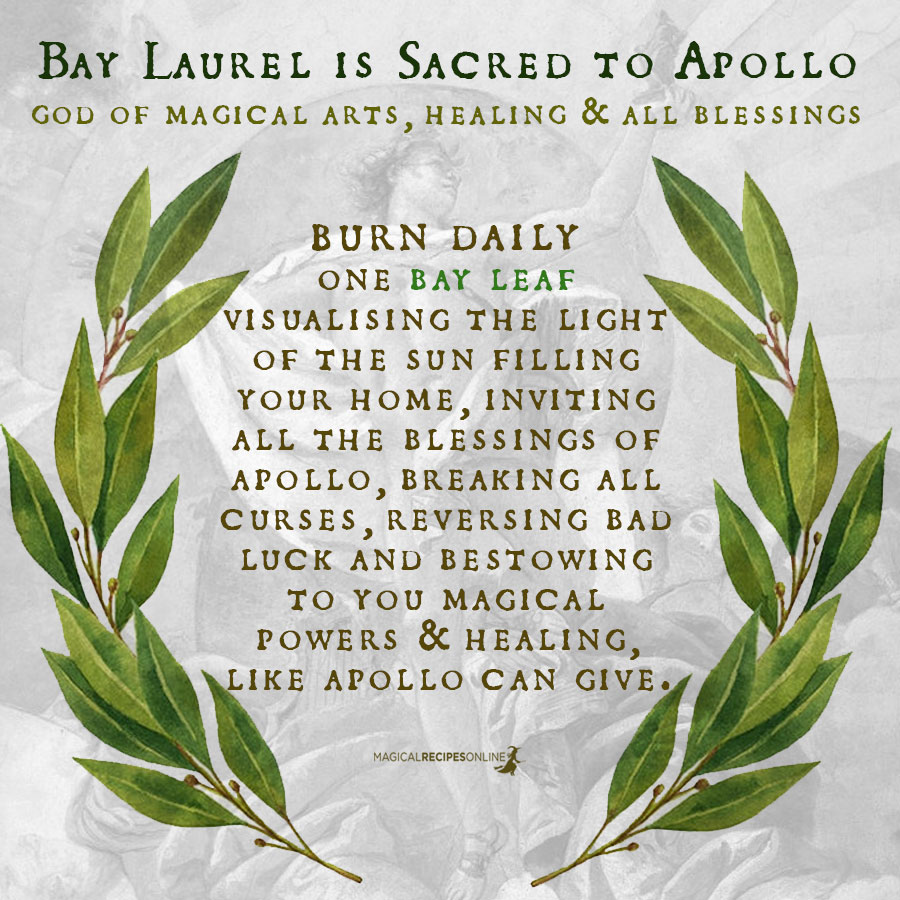 It is said that Pythia, the greatest Priestess of Apollo, chewed Bay leaves in order to communicate with the mighty Apollo and ask him for advice and prophecies. So do this!

Magical uses of Bay Leaves are for:

When you wish to see prophetic dreams, write down your question, that wants to be answered on a clean white piece of paper and leave it right beside your bed. After that, drink a cup of bay leaves tea and fall asleep. Your question will be answered. When it does burn some leaves to honor the powers of Prophecy you are granted.

These magical properties and correspondences of Bay Laurel is what makes this herb so significant in everyday magical practice. But let’s deepen more our insight for this magical herb. Let’s dive into the deep waters of Ancient Greek Magic. Earlier we saw that the most famous oracle of the ancient times was Pythia, who alleged chewed leaves of Bay Laurel in order to communicate with Apollo, was the high Priestess.

But where does Pythia’s name come from? Long before Apollo’s dominion over Delphi (the center of Apollo’s worship) there was a dark creature living in a cave, a dragon deamon called Python who terrified the area. Apollo with his elbow killed Python and he established his worship there, exactly were the dark force ruled. This is the power of the Light. Darkness flees before the Light. Where the darkeness ruled and caused fear and teror, Apollo reversed that with Light, so inside the cave, the high Priestess did the most sacred rituals. This is why bay laurel”s leaves have so much power in reversing jinxes and dark forces. It conjures the power of Sun and the spirits of the Light.

Burn daily, in the morning, right after you wake up, one or two bay leaves and visualise yourself and your room enlightened. You might feel to pray for a few seconds or chant, do it. But always keep in mind that while you burn the leaves, you reverse the negativity to benevolent energies. This takes only few seconds yet its so powerful spell if you keep doing it for seven days. It”s better to perform this spell in waning moon but do it whenever you feel like you want to renew the energies of your house and yours.

Bay Laurel, Daphne, is one of the most sacred Sun herbs and it is directly associated with Apollo, the Sun God of Ancient Greece. Apollo is a God praised for many reasons. To give health, to help with matters of Love, for arts, for sports, for music mostly for anything. Apollo was maybe the most beloved God of Ancient Greece.

Bay leaves were believed to summon the Creative forces of Sun, thus aiding in making our dreams come true. Bay leaves are used in Good luck and Success spells but also in Wishing spells. Try this! Summon the Creative forces of the Sun by writing with magical Dragon’s Blood ink on a bay leaf what you wish. (try our recipe for the Dragon’s Blood ink, Dragon’s blood is chosen for its creative fiery magical properties.)

Click here to watch the Video on WitchTV to see how the spell is done!

Once you”ve written on the leaf your wish the only thing that”s left is to burn the leaf. While you burn the leaf say “Fire of the Sun, Make my wish Come true!” and then say your wish for example “I wish to be more charming!” The spell is done. Close your eyes for a few seconds, visualise yourself having what you want, living with your wish and the blow the ashes of the leaf outside of your home so that the wind take your wish and make it a part of the universe. This spell belongs to Fire Magic. Maximum power in the Planetary hour of the Sun and on Sunday.

PREVIOUSLiquor for Joyful Lust
NEXTWhy Three times is the Charm? What is beginner’s Luck?