Home Witchcraft 7 Signs you Are Destined to Become a Shaman 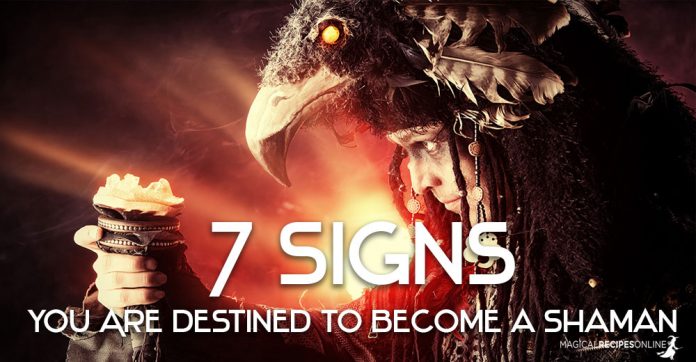 Shaman, a word of Power. Drenched in occult wisdom but with a much more nature-based way. A shaman is someone who is powerful and wise enough to intervene in the world of spirits. Traditionally, they achieve that by entering into a trance state during a ritual, accompanied by the sound of animals or drums.

Did you hear the “Call of the Shamans” ?

Now that we’ve seen what Shamans are, we should probably tell you that Shamans hear their “call” from a very young age. You must be wondering, then why read the signs if I have not “heard the Shaman’s call”.

Well my dear, you may have heard it but did not reply! We live in a world were TV and game consoles have out-throned magic. Although TV, computers, the Internet and the video games can truly help us in so many ways, sometimes they can silence the inner voices and mute the communication with the spirits. So lets begin with the Signs…

The Shamans usually pass their powers through bloodline, as they are also masters of Blood Magic. Moreover, in our World (and in the Past) Shamans are often “made” when a living or a dead ancestor initiates the young one into the Craft. These ancestors (ghosts or living humans) are our guides and protectors. Even when they pass to the Realm of the Dead, their spirits some times live amongst us especially when there is “a very good reason”!

Having a witch ancestor doesn’t necessarily make you a Shaman – or bloodline witch. But this changes especially when the Work of your dead ancestor may not be over. Did s/he tried to banish a demon and failed? Or maybe s/he tried to break a curse? Maybe s/he wanted you to keep on the bloodline and teach their Craft? There could be many Reasons.

But mark my word. Once you realise that your Grandmother (for example) was a Witch there is a very good chance that she would want to pass her powers and wisdom to you… (To investigate more about it you can use a simple and safe Necromantic Ritual – see here)

2. You Love Nature and Herbal Magic

Shamanism is attached with Nature. Everything comes in balance with Nature. Shamans and Druids are very similar (if you exclude their religious systems). A Shaman is a very talented herbalist. You might be one if you feel close and familiar with the forces of Nature.

These wise Earth conjurers can talk with the spirits of the Herbs. A Shaman not only knows of the properties of each herb but can also have the ability to talk with each one. During this “conversation” the herb is being convinced to enhance its abilities in order to give its best elixir for the Witch. This Tree – Herb talking may be something you did when you were young! (See here more about Herbal Magic)

Do you remember talking to trees? Maybe you can recall “chatting” with a rose asking it not to hurt you if you just could smell it! Does this rings a bell ?

Shamans are also called wounded healers. They know how to heal but they have also been struck by the diseases.

They believe that the cause of the diseases are troubled spirits. Thus, each disease and/or accident is caused by an angry – malevolent entity.

Did you have a Near Death experience? Maybe you’ve been through a very serious disease which brought you to the borders of death. Or probably you had a severe accident and something happened there which made you realise “there is more” !

Especially if you have been miraculously healed then it probably means that your powerful spirit managed to banish the malevolent spirits or even you had help from your ancestors. Remember that health is a very serious issue and even though shamanism is a very wise path of Enlightenment, you should always consult with your medical doctor.

Moreover, do not judge yourself when (you or others are) sick or wish to become sick in order to become a shaman. Not all shamans are (or were) sick. Furthermore, there may be a reason for this or not! Love yourself and heal!

Shamans usually feel a lot more connected with the Astral Realm than the material one. This probably happens because they’ve met the beauty of the Other Realm.

One other reason maybe that you can project in the astral plane. These wise healers have the ability to travel to other realms in order to seek guidance or consult with higher entities. (Click here to read more about Astral Projection)

5. You feel ok with Being Alone

They say that “old souls never feel alone” and this is probably the case. Shamans love spending time alone. Why?

Astral Projection and communication with the Other Realms require solitude. This is why the love spending time alone ,connecting with the Spirits of Nature, animal guides and spirits of the Dead.

If the night does not scare you and being alone makes you happy or if you feel comfortable with darkness then you have another sign!

6. Visited by Animals in a Weird Way

It’s very well known that Shamans love consulting with the Totem Animals in order to cure and cast spells. Animal Guides / Totems are in fact powerful archetype spirits who possess powerful knowledge. They stand between our world and the other and “serve” as links to the wisdom of the Other Realm.

Have you been visited by animals in a very weird way? Do animals try to catch your attention? Have you been followed by the same animal over and over again? It may be your totem animal trying to get to you! Animals may act as omens for the Future – see here what it means when you are visited by 10 powerful animals!

You may have also experienced repeated visits of Animals and Animal Guides in your dreams. Do you keep seeing snakes? Does a bear attack you? These totem animal might try to catch your attention!

7. Prophetic Dreams and Visions of the Future

Shamans were believed to have the ability to see and foretell the future. These are very powerful traits who are used to help and guide. Future can be changed as the Web of Destiny is ever being weaved!

Have you experienced these Signs? Let us know.

Even if you don’t you can either way for this Nature path and become a Shaman.