Home Witchcraft Which Halloween God – Goddess are you? Pick a Symbol! 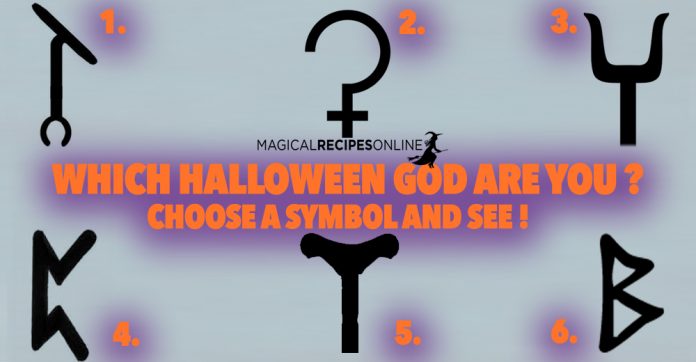 Halloween is such a magical time for all Witches – regardless their spiritual path. It’s this time of the year when the Veil faints and we are able to cross the worlds and receive valuable wisdom and magical powers. Halloween is associated with the Real of the Dead. You can read here more about Halloween and what is all about. But there is one thing you already know for sure. As there is more than one God for Death, there could not be on Halloween God either. (See here some Gods associated with Halloween – Samhain).

Which Halloween God – Goddess are you?

We are all going to face Death. And Death is only the beginning for something new. The night comes only to give birth to the Sun again. This is the circle of life. But each one of us has a unique and personalised attitude towards death. This is not permanent and it can change. Do this test the next year. You will see what we mean!

Which symbol of ‘Death’ attracts you the most? Pick one!

Each symbol corresponds to one deity who is somehow associated with Death, the Rebirth and the Realm of the Dead. So let’s take a look.

You picked the Sceptre of Anubis. The was sceptre is a symbol that appeared often in relics, art, and hieroglyphics associated with dominion and unquestionable power. Anubis is the great Gatekeeper of the Realm of the Dead, therefore a true Halloween God. He is good and fair. He is the one in change defining whether a soul is pure or not but also the one who can unblock all problems.

If you picked Anubis, then you respect the power of Death yet you actually believe it’s a doorway to another life. You try to be fair in this life and you know about karma. Use the power of Anubis to unblock your path in this life.

You picked the symbol of harvest, the symbol of the Great Goddess of Earth, Demeter – Ceres. She is also the Goddess of fertility but she is associated with Death as well. The Harvest is just an inevitable part of what we call life.

If you picked Demeter, then you are a bit nostalgic about your younger years although as time progresses you make peace with what’s coming. The harvest is a bit scary for you and you are not convinced about the afterlife but you do make peace with it as it is part of the creation. Keep on smiling though, death is only another beginning and life… oh life is full of mysteries!

You’ve picked the Bident, a two-pronged implement (similar to the Trident – the weapon of Poseidon), which is the weapon of Hades, God and Ruler of the Underworld. He is a wise and frankly – quite rich – ruler of the Realm of the Dead. Hades is not just another Halloween God. He is too powerful. Zeus, Poseidon and Hades picked the three kingdoms of this World. Hades, picked the Kingdom of Death. If we are talking about an Emperor of this Realm, Hades is the one! A handsome and powerful ruler.

4… you are The Morrigan

You picked Perthro, the Rune which speaks of risks, the sacred feminine sexuality, death, birth and time’s mysteries. Everything the Morrigan symbolises. As we read in the Samhain Gods and Goddesses, The Morrigan, is a  warrior goddess that is associated with death and is often represented by a trio of ravens. It is she who decides who shall leave the battlefield alive and who shall be carried away on their shields.

If you picked the Morrigan then life and death is truly an endless adventure for you and the more you search the more you discover amazing things and reasons to fight for. Life is an endless battle for Wisdom and you are a divine Warrior born in this world to search for the truth. The truth is out there dear reader. Thank you for having you in our team!

You’ve picked Danda, the wooden weapon of Yama, the God of Death in Hinduism. He is fierce yet fair and good. He directs the souls of the departed ones to a temporary purgatory where the soul is purified of sin by its suffering. A true Halloween God you might think. This is only a procedure where the soul needs to let go of darkness and s/he could move on to the higher realms.

If you picked Yama then you probably feel that you need to suffer for your sins – which apparently you bear as a heavy burden on your heart. However, you don’t have to. Yama, only reminds us that we need to forgive ourselves and start anew. His “scary” appearance is only meant to scare our sins off.

You’ve picked Beorc, the Rune of Birch, a tree associated with Freya. Normally Freya is associated with fertility and abundance, but she is also known as a goddess of battle and war. Half of the man that died in battle would go to Valhalla, but the rest would join freya in Folkvangr as we read in the Gods of Samhain. Moreover, Freya, is a patroness of Witches and Divination.

If you picked Freya, then you truly believe in an exotic Realm of Death where your soul will freely hang out with dwarves, elves and other enlightened beings. Death is a beautiful doorway, a bit scary but exciting too. You are keen on contacting the spirits of the Dead. Therefore I would recommend you to try the Automatic Writing. You are close to your ancestors.