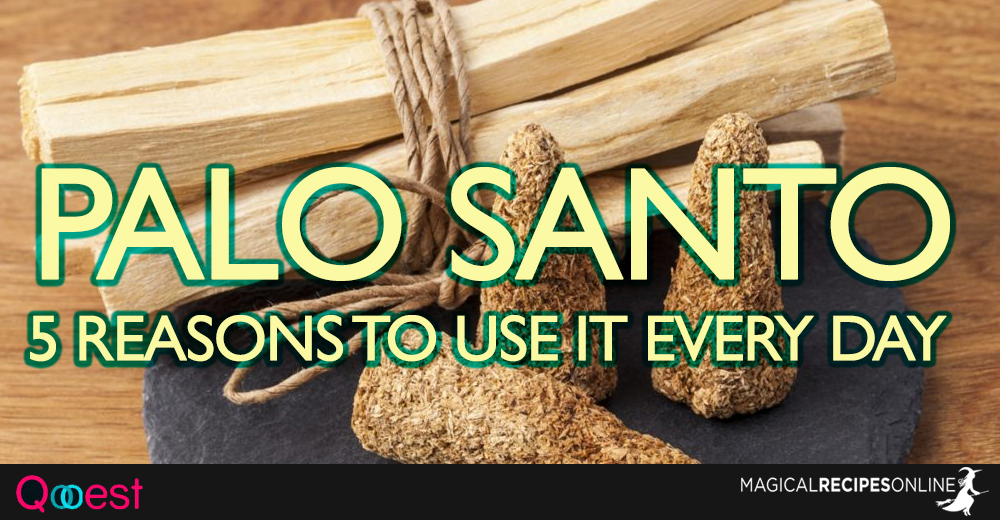 Bursera graveolens, more commonly known from the Spanish language as ‘Palo Santo’ which means ‘holy wood’, is a wild tree native to Mexico and South America (the Yucatán Peninsula to Peru and Venezuela). Its citrus, minty scent and yellowish piney smoke became very popular in Northern America from the 1960’s and since then, many forms of ‘Palo Santo’ is being used for Industrial or Spiritual Reason.

The Energy of the Holy Wood is believed to be used since the Era of Incas, a system of different cultures and peoples that developed in the Andes of Colombia, southward down the Andes to northern Argentina and Chile, plus the coastal deserts of Peru and northern Chile. Incas were believed to be very powerful in magic, thus, picking this wood as one of their favorite tools, means something for us!

Why use Palo Santo instead of other types of Smudging?

5 Reasons to Use Palo Santo Everyday!

1.To Cleanse Your House from Negativity

While other Resins can also help you cleans your house from negativity, it’s Palo Santo’s warmth which makes it a powerful ally. It conjures the powers of Love into your home. As the smoke fills the room, magic begins to happen, harmonizing the energies around.

So not only does it cleanse your Home, but it also promotes feelings of peace and affection to every inhabitant. See here more ways to abolish negativity from your home.

2.To Cleanse your Aura

Palo Santo not only abolishes black magic and curses it also help you fortify your Magic Shield against all similar types of attacks. Although only Palo Santo is not enough in difficult cases, it gives nevertheless as powerful kick-start.

This means that if current problems or diseases come from troubles of the Aura, they will heal too. Hence, you will notice that many of your problems go away, smoothly, without even noticing it.

Palo Santo is the ally of Empaths. Moreover, it helps everyone who bears emotional scars heal them in a very sweet way. As mentioned above, Palo Santo conjures the powers of Love and Light. Hence, it prompts our Aura to heal its scars.

Have your emotions been traumatized in the recent or distant path? Use Palo Santo along with other healing techniques and you will see better results. The magical essence of it will raise your vibrations and help you acknowledge and avoid the same mistakes.

In fact, Palo Santo reverses bad luck. It’s magical abilities are quite spectacular when it comes to universal possibilities. How does it work? Again, let’s go back to what we said before. It ‘conjures the powers of Love and Light in our hearts.’

Hence, we become a Beacon of Light and Love. When we bear Love and Light we attract Good Luck, Love, Affection and Wealth as we Activate the ‘Law of Attraction’. Sensing the powers of Palo Santo in a daily schedule, we change effectively our destiny, giving a positive feedback to the universe.

The Magic of the ‘Holy Wood’ is so powerful that transcends time and space. It acts as a cosmic catalyst for Love and Wisdom. Good spirits are attracted by the vibration of this Holy Wood and come to us.

Using it on a daily basis, brings good and helpful people towards us. More specifically, the scent of this magical wood will attract wise ancestors and teachers to aid you in your problems. It’s even more essential if we engage in spirit communication.

Let’s make a test. Use Palo Santo for a whole week and check the results at the end of the week. You will be amazed with the Results.

Do you use Palo Santo?