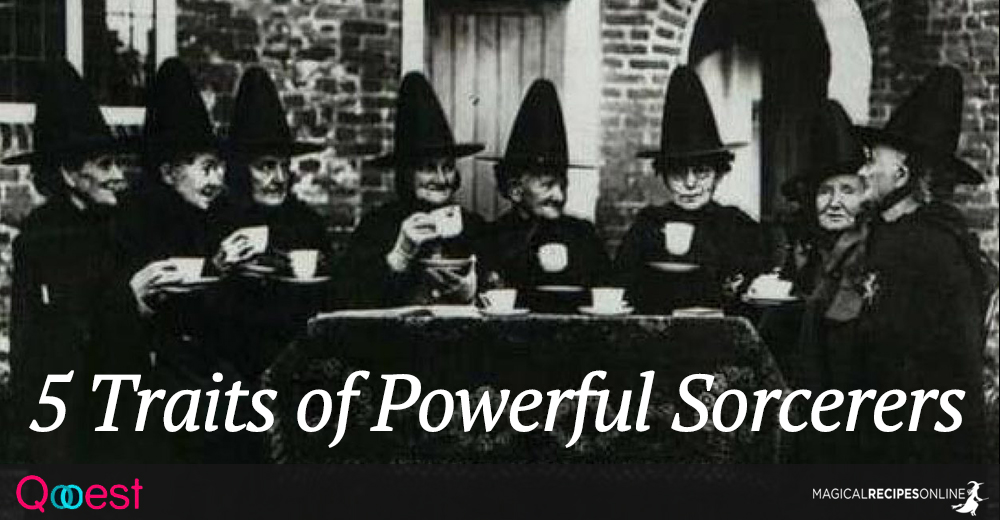 Magic is Power and Power is Magic. Our roots go deep inside the all powerful Great Mother, Gaia (Goddess of Earth). This is our source and the gate of realms. She Nurtures us and She gives all we need in order to spread our wings and fly beyond. Witches and Powerful Sorcerers tap into this power to enhance their magic and manifest their desires. Because frankly, Magic is the Manifestation of our desires. And that’s why it scares people.

Through millennia, Magic has been the shelter of the Wise Ones and the consolation of the Awakened. Magic is the link which connects this world with the others. Moreover, Magic is a way to balance your everyday life and your tough daily schedule with your divine purpose.

We’ve seen traits of natural born Witches but some of us are different, special. These are the powerful ones, the leaders, the teachers. It seems that these traits are common to those who breathe magic and change the world.

NOTE: These ‘traits of the Powerful Sorcerers’ may not follow someone from the beginning of his/her life. Apparently one may recognize them after some practice. Either Way, these are signs that one has progressed in the Spiritual Path and is ready for greatness!

1. Affected by the Lunar Circles

Have you noticed that the Full Moon changes you? Are you influenced by the Lunar phases? It the Moon affects you it means you are close to a Great Source of Power. Moon has always been associated with Magic. Deities of the Moon, as Artemis-Diana, were considered Mastrers of Magic.

2. Affected by the Changing of Seasons

Charles Godfrey Leland published the book entitled “Aradia, or the Gospel of the Witches” in 1889 which is believed to be an anthropological study on the rituals and beliefs of the Pagan Witches of Tuscany. In this book, 11 Gifts of Aradia – Magic Powers – were granted to ones who followed the Old Ways and celebrated the Circle of the Sun.

It was believed that the Witches are deeply affected by the Sabbats – the annual celebrations of changing seasons. If you feel more magic in the Winter Solstice – the Yule – then you are probably in touch with the Real Magic in you.

3. A Weird Connection with Your Dreams

Do you believe that your Dreams actually played a very important role in shaping your current life? Have you been guided in Your Dreams? These traits are believed to be present in powerful sorcerers and witches.

Let me remind you, that even in Bible, the three Magi – powerful sorcerers of an ancient cult who were the first to greet baby Jesus – have actually also been directed in their dreams.

Dreams are a separate realm from the one we are living. Moreover, it’s a threshold from which we can jump into the Astral Plane where anything is possible as long as we wish it. Powerful Sorcerers might actually get some guidance through their dreams as their teachers are free to contact them!

Have you been noticing repeating numbers? Waking up at the same time without putting the alarm on? 11:11 or 5:55 or any other repeating number ? Do you keep seeing signs and omens over and over again?

It was believed by many schools of magic that this world is built on patterns. Pythagoras believed that the world could be explained by numbers and that all could be traced back to simple digits. This is why Witches believe that they can interpret omens as they all relate to patterns.

If you happen to have deja-vu or feeling ‘synchronized’ like you meant to be at a certain place or with a certain someone, it means that you can magically perceive your purpose.

5. Love has changed your Life

If Magic is Power, Love is the Key to unlock it. Love can activate the Chakra of Heart, a very essential Chakra for Magic. Furthermore, it works like a catalyst for all Magical Practices. Was Love a reason to change your Life? Did Love turned your Life upside down?

It is believed that the ones who are affected by love and live in an emotional rollercoaster are actually the blessed ones. There are the favourite souls of Mother Earth as they live for love – the highest of Virtues. Hence, the ones who are closest to Love have an amazing ability to manifest their dreams with minimum effort. Tapping into Love is a very powerful Lesson in most schools of Magic.