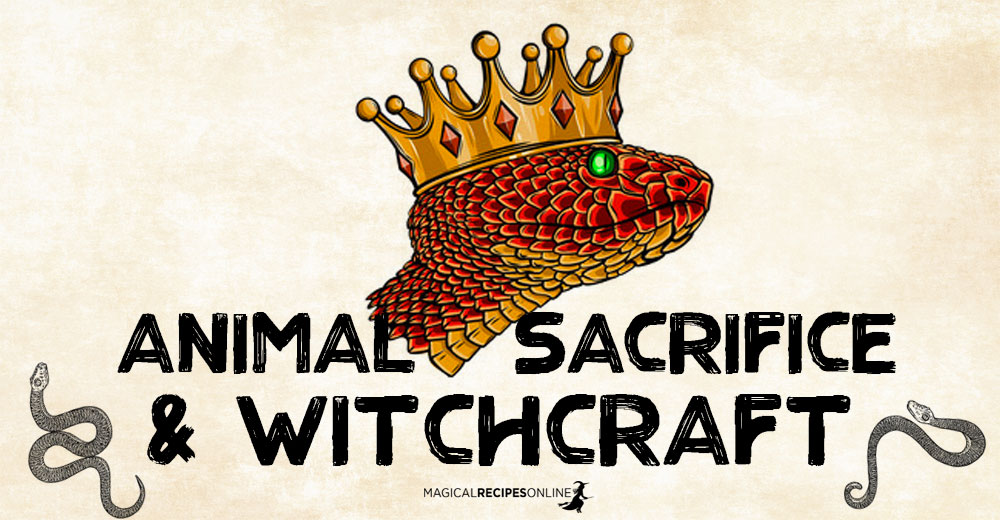 This title may have already brought chills in your bones. However, if you know us at all, you know where this is going. In this article we are going to examine the historical and magical value of animal sacrifice. But before going on let me be clear. We won’t give and advice on how to kill or torture animals, you know how my we love them. On the other hand we won’t try to sugar-coat the truth. So buckle up!

Many religions, ancient and existing ones –  along with several magical practices, employed animal sacrifice in their annual sacred calendar, as parts of their rituals or customs. There are thousands of examples. From the sacrifice of crocodiles with a certain sign on them for Sobek – the Egyptian crocodile god, to legendary sacrifices described in homeric tales and other ancient accounts. But even nowadays, there are whole feasts connected with holiday meals based on animals like turkeys, lambs, fishes or sea food… the list is endless.

Let me be clear. It’s true. There are thousand spells written in ancient texts like the Magical Papyri or other ancient grimoires which demand the blood of animals or other parts of them. Frankly, we were shocked many times when we came across extremely bloody and brutal rituals in old grimoires. We asked ourselves, did they really do this? And more importantly could ever be worth this?

We live in a world were several animal species gone extinct or are really near that. Even now, hunters go after Rhinos to use their horns for their non-existing but still fabled aphrodisiac properties. We’ve got so many powerful herbs and spells but they still look for rhinos. Of course the horns have no aphrodisiac properties. But even if they had, would this justify killing Rhinos?

Therefore, modern witches – like us – have questioned several times the effectiveness of these ‘ingredients’. This didn’t happen because we just want to be politically correct. There are much more serious reasons: magical, ethical and ecological.

Many of the ingredients are in fact plants in disguise. Witches and Sorcerers almost always tried to encode their books of shadows. This happened for many reasons . For starters protection. Leaving the information uncoded, was like leaving a nuclear bomb unprotected. Magic is power and everyone knows it including the ones who hunted us. And this is the other reason. Not only Witches tried to hide magic from the naive, but they also tried to protect themselves from the inquisition.  Thus,  coding the rituals so that the naive or fanatics would never find out the truth about these spells was a first step protection.

Some examples of the coded ingredients:

We live in a different time of history. Thus, we do not hunt for food – well some do, but we do not depend on it, in the advanced countries at least. Witches of the old times, used parts of the animals, hunters brought them for food. Nothing would go to waste. It was actually a way to honour the body of hunted prey completely. They hunted for food and used the other parts for other activities including Witchcraft. Therefore, Witches did not -usually- killed an animal just for a spell. They utilised already dead animal parts.

Furthermore, pain is pain. Whether used for a healing spell or a blessing, if you use pain or death in magic, this counts as bad karma – and this does not come from a vegan. Of course, good intentions and thoughts play a very important role too, but there are alternatives. You don’t have to kill anything. But we’ll get there.

A very common love spell – supposedly – requires to sacrifice a white dove. Allegedly, sacrificing this sacred bird of Aphrodite, conjures the love of the Goddess. Let me stop right here and ask you to think of what you’ve just read.

I mean,  do you really think that Aphrodite would be thrilled if you murder her sacred bird? Would she give you help or her rage? Surely we cannot even begin to think like Her or any other God or Goddess but this is a very important issue. I personally think that (any) God is Love and Love is the key to unlock divine gifts.

You can easily guess where I’m going with this. Although there are many ancient spells – performed even by the ancient priests and priestesses of the gods – which actually sacrificed animals – there also accepted alternatives which were equally effective.

Alternative to Animal Sacrifice – our Way

So please, never sacrifice an animal. There are many alternatives and you should know how to use them. Let me tell you some examples:

PREVIOUS7 Reasons to become a Witch today!
NEXTSeaWeed and its Magical Uses