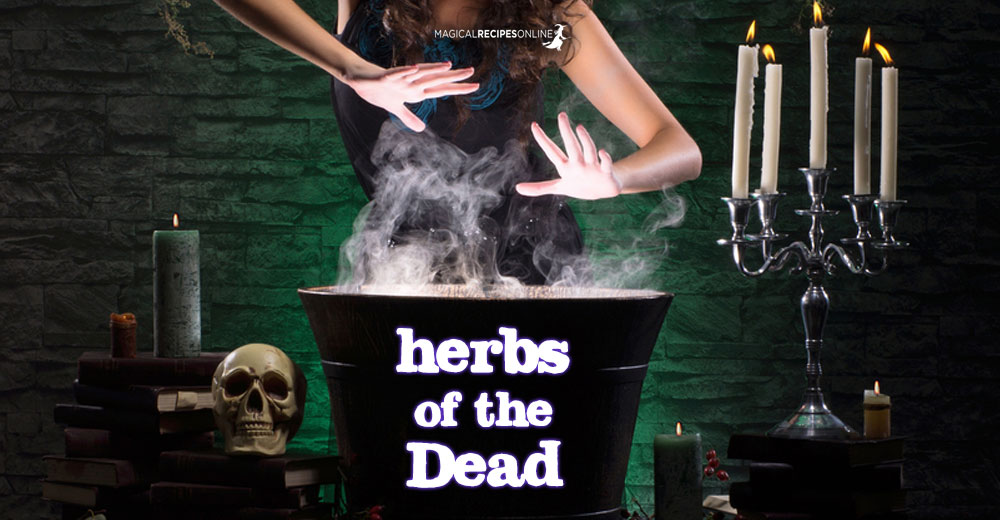 Witches, Mages and Alchemists we always fond of herbal magic and they knew – and still do – that parts of the Creation are “crystallised” in each and every living and non-living thing. They knew that each herb, resin, flower, plant or tree possess a different and distinct quality which can be used for all magical endeavours. Magic is the the Art of recognising and tapping into this Natural Power in order to use it for our Purpose. Of course there are herbs used to contact the Dead or for purification purposes. These are the Herbs of the Dead.

The Herbs of the Dead

In the Ages many plants have been attributed to the Deceased as they either contained magical abilities to help a Witch/Mage attune with the NetherWorld, or they noticed them growing inside Cemeteries and a sacred Necropolis, or even were attributed to Gods of the Underworld like Hades, Persephone or Anubis or of course help us heal the wounds of a tragic loss. These herbs are sacred in both Eastern and Western cultures and religion and are presented in this article. These are… the Herbs of the Dead.

Valerian: It was also called the Graveyard dust. This herb have always been famous for its ability to calm one down and even help him/her sleep like the Dead.

Cypress: This magnificent tree is usually growing in Cemeteries and Necropolises. Hermes the Messenger of the Gods and the one who aids Spirits to cross the Worlds was believed to bless this tree to honour his beloved Kyparissos.

Mullein: A valuable ingredient for Samhain rituals and Ceremonies for the Dead. Was used to “cleanse” the dead body and prepare it for some holy and divine.

Mandrake: The Root of Witches is used for its magical ability to Protect the Soul (as well as the body) from maleficent energies and entities. Its extensively used in Samhain rituals. See more about Mandrake here!  ***TOXIC***

Wormwood: A very potent herb to help us heal our wounds but also grand us the “Sight” and be able to interact with the Dead.

Patchouli: Also known as the Graveyard dirt because it’s earthly, wet soil like smell. Patchouli is known for its magical properties to raise Earth Energy and help us ground our magical powers. It was often used in ceremonies where spirits where involved.

Spikenard: Smell like Patchouli. In the Ancient days Spikenard was precious like gold. Spikenard were used extensively in Rituals for the recently Departed and was attributed to Osiris and the Sacred Phoenix.

Bay Laurel: Associated with Apollo this herb can help us modify the energies and raise our vibes while it aids us to heal our emotional scars. It also helps us establish connection with the Spirit World.

Myrrh: This precious Resin has a unique ability to raise our spiritual vibes and this is why it was used since the ancient time to anoint the Dead, in order to help them cross the NetherWorld while accompanied by Enlightened spirits. When Jesus Christ was considered dead, Mary Magdalene came to His tomb to anoint his body with Myrrh only to find an Angel. Myrrh was also sacred to Isis with which she anointed her murdered husband, Osiris.

Cinnamon: This fragrant herb was used by the Egyptians to anoint the mummies and help them achieve immortality. Cinnamon is attributed to Anubis and Osiris but it has strong Fire qualities too.

Birch: This sacred tree was attributed to Cerridwen for its magical ability to aid in Rebirth. Birch had this easy and eager ability to repopulate areas damaged by forest fires which signifies its magical powers for Rebirth. Wished and Blessings for the Dead can be written on a birch bark and can then be burnt along with the dead body or even buried.

Holly: The red berries of Holly (a symbol of Masculine power, the ever-burning Fire) shining in the heart of Winter, symbolise that eternal Life and Hope can endure everything, even Death! Holly acts as a shield against the Dark Arts.

Lotus: This magical flower blooms from the dark and dirty swamps is a universal symbol of Reincarnation and that we are Eternal Souls descending from a Divine Source. We radiate Wisdom and Love even when we are Dead.

PREVIOUSHow to See your Aura and the Colours
NEXTPrometheus, the wise Firebringer and Mankind’s Benefactor