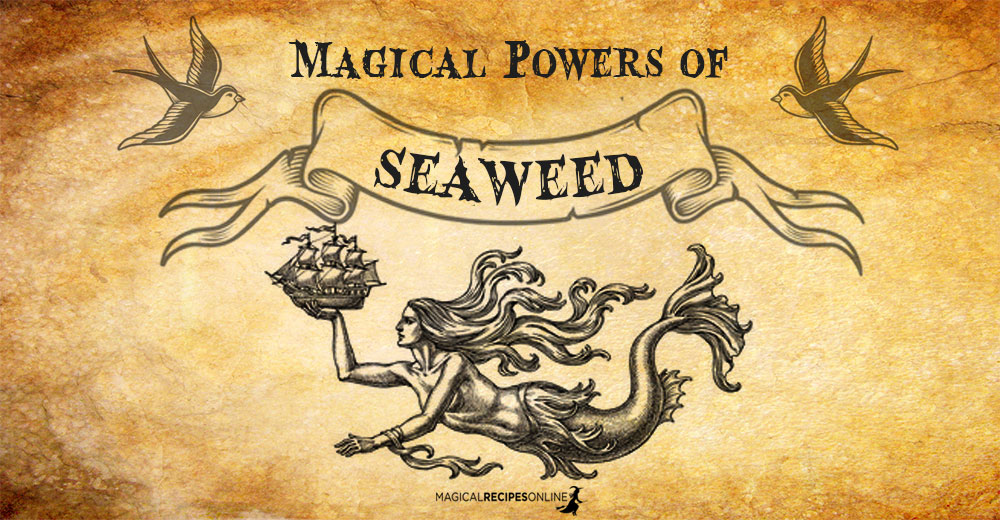 We never tried to hide our love for the Sea. Actually, we’ve got several articles on Sea Magic. After all, for some of us, Poseidon is a Patron God. Nevertheless, Sea is a source of  endless wisdom, healing and magical powers. However, no one has paid enough attention to the herbs and powers of the sea, leaving a great source of life & magic away from their practice. We are not amongst those. Here, we are going to talk about the seaweed, the common seaweed which found anyway, usually washed away from the depths of the seas and oceans. Old Witches called the Seaweed “Lady’s Tree”. This plain and humble seaweed possesses many magical powers according to the old witches.

Before we start though, we need to make it clear that

All Seaweeds are not the same!

Once we’ve established this, let’s see how we can safely and effectively employ the power of the sea in our practice.

In general, Seaweeds are considered carriers of good luck and abundance. As the sea is vast and full of hidden treasures, common seaweed is believed to be a link between the realm of the Land and the realm of the Sea. Therefore, herbs of the sea are conjuring the spirits that dwell in the deeps.

Seaweed is considered to be a great tool to summon entities which dwell in the sea. Therefore we carefully burn it (usually close to sea coast – always use fire safety measures – don’t try it if it’s forbidden in your area) to summon

How to use Seaweed for Summoning Purposes:

Just gently and respectfully place in the waves a piece of dried seaweed, or burn it near the sea coast asking for what you desire.

How to Summon the Winds with Seaweed:

Before you try it, please make sure you know you really want it. Don’t just bother the Winds.

The spell is quite simple and it dates back to the Ancient Greece where Winds were Gods who came to support anyone who asked their help. Just visit our article to see their properties and why to summon each. It just requires you to find a long enough piece of seaweed. Now just whirl it clockwise over your head. Additionally whistle and call the name of one God of the Winds.

Naturally, the fame of this spell lived on in the Dark Ages. Back then it was believed that this spell is so strong that can even conjure a storm.

A common magical ritual is based on finding a small piece of seaweed. Witches gently rub it on new furniture and doorknobs to consecrate their new business place and bless it with the abundance of the sea. Another small piece (not the one you rubbed the place) is placed in pocket to attract money.

Sea is believed  to be pure and cannot be desecrated. Therefore, its salt is believed to possess unlimited banishing powers. This is why we use it in Recipes like the Black Salt (soon to get it from our Official Magical Store) and Holy Water.

Therefore, Seaweeds are believed to embody the living powers of the Sea. So when waves wash out seaweeds, sea Witches gather it and place it outside their doors, on door knobs and hang it beside doorsteps to change bad luck and drive away evil forces. It is believed to possess magical powers to:

Protection Against fire and harm

Due to the fact that seaweeds are considered to embody the powers of the Sea, are kept in vases usually on mantelpiece or over the hearth and fireplace to protect the house against fiery fiends who bring violence, destructive fire and physical harm.

PREVIOUSAnimal Sacrifice and Witchcraft
NEXTFortuna, Goddess of Luck and how to Call her