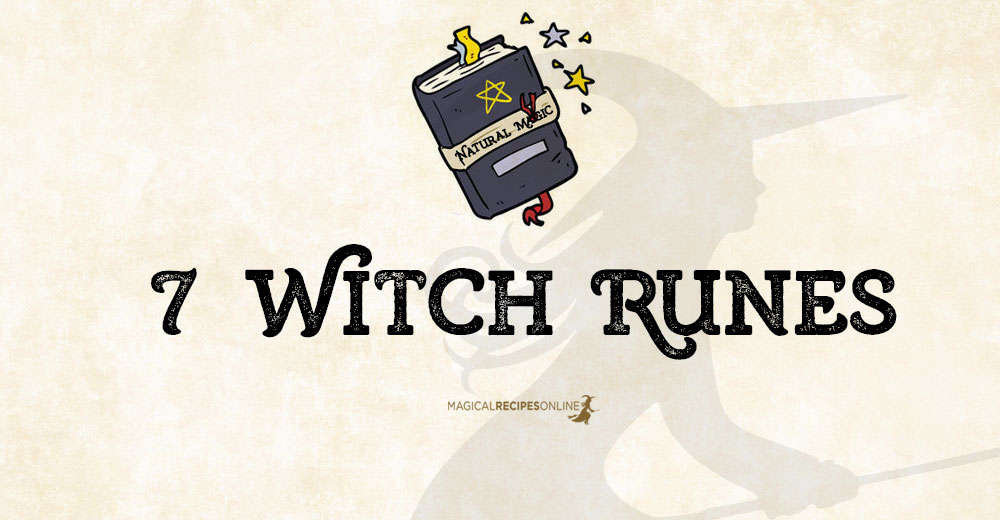 There are so many symbols and talismans Witches Love to use in their daily practice. As you already know, we’ve implemented Sacred Geometry in countless spells, starting from our very basic, the Power Awakening Spell. In this spell for example we use the Triquetra, a magical symbol Witches really enjoy using for so long. However, many of those symbols come from unknown origins and their use can be blurry. Hence, we discourage to use symbols which you don’t really know where they come from or how Witches used them. Why?

Because Witch Runes draw power from Sacred Geometry and also their use. For example if some Witch Runes were used for malevolent purposes, they might have a negative impact in your life (especially if you don’t focus enough in your purpose).

The Golden Rule is: Use Symbols you Love!

Hence, just to be safe, we encourage you to use the Witch Runes, Symbols and talismans

That been said, now let’s focus in some extra popular Witch Runes.

1. Mark of the Bustard

This three-branched rune looks much like the Rune ‘Algiz‘, which we used in our Protection spell. However, you can notice some differences especially because the ‘Mark of the Bustard’ can also be drawn horizontally. Furthermore, despite ‘Algiz’ is more known as protection Rune, the Mark of the Bustard was used by shamans to contact the Spirit World.

This bird is actually flightless. In this way, it represents our ability to cross the realms. Bustards are birds which were extremely popular in thanks-giving day before the turkeys. Hence, due to their ‘popularity’ they quickly became extinct. Thankfully, the birds returned and their population grew. Still, this symbol is used by many shamans to contact Other Realms.

Interestingly, Nazis used the same symbol the Lebensborn initiative which helped and contemplated the “racially, biologically, and hereditarily valuable families” of the ‘Aryans’. Hitler was obsessed with Witchcraft and so he instructed to use the usual Rune to denote the living and the upside-down one to mark the dead ones.

It is also known as the Sun’s Cross or the Swastika – which originates from ancient Hindu religion – and is still used in Hinduism and Buddhism. However, as the Brigid’s Cross looks a bit different, thankfully is not associated with the Nazis. The symbol is linked with Goddess (in Paganism) and Saint (in Christianity) Brigid.

Brigid is a Goddess of Fire, Light and Warmth and her name means “Bright / Exalted One”. She is the Master of All Arts (including magic) and she is usually depicted as a blacksmith. Moreover, she is the Keeper of the Divine Forge and Hearth capable to transform, with her own magical, alchemical, divine transmutation, one thing to another. Also, she is the Divine Sparkle that blesses the candles to be used in all your rituals. Brigid is the Goddess that penetrates with her Divine Flame the coldness of winter and allows the first flowers to pop. Snowdrops is one of her sacred flowers and it is one of the first flowers that appear near the snow bed, signs of hope that the winter is over.

Hence, traditionally, the crosses are made in Ireland on February 1st – during the great sabbat of Imbolc (between the Winter Solstice and the Spring Equinox). Once created, it is then placed inside the house above windows and doors to invite the Regenerative forces of Spring, bring forth healing and banish evil, malevolent fire and hunger!

The Triskelion is symbol which roots probably come from the ancient Greek religion. Hence, Triskelion comes from the Greek words Τρία = Three and Σκέλος = Leg / Part is in fact a geometrical symbol, three legs in move united all together creating a never-ending cycle of rotational move.

Triskelion can be clockwise or anti-clockwise. For example:

There is a different use for each symbol. Therefore you can read more about the Triskelion’s magic in our detailed article.

The Djed is one of the most commonly used symbols in the Ancient Egyptian religion. As a pillar of stability, it symbolizes the backbone of Osiris – an Axis of power. Hence, it was used to summon stability and power to the one who focused on it. Moreover, it resembles to the sacred Phallus which is the key symbol of creativity and abundance – as well as an apotropaic symbol (repels evil).

The four bars of the Djed symbolize the four elements as the key components of this World’s axis. In other words it explains what this Realm is build of. Hence, the Djed was used to invoke stability and protection from all evil. In talismans the Djed helped the Priest/Priestess handle difficult situations especially when dealing with malevolent spirits. According to ancient Egyptian Magic, the Witch who wears the Djed can claim the power of Osiris to bind hostile spirits

This Witch Rune’s origin seems to come from the icy Scandinavia. Norse religion used to carve this symbol in order to counter malevolent magic.

The Scythe’s symbol comes from the ancient god Kronos, the god of time. Saturn in latin, Kronos is the father of all-mighty Zeus. This witch rune draws its power from both the god and the associated planet.

Let me remind you the Saturn is also called the Planet of Witches. Why? Because Saturn’s cleansing power takes away all obstacles and delusions. Through challenges and tests, Saturn empowers us. The symbol can be used to cleanse illusions and banish all that is unnecessary. However, always make sure you clearly focus on your intention as the power of Kronos can be extremely intense and get you in a lot of troubles. This symbol is meant to be used only by skilled and experienced witches.

Also known as the Magic knot, the symbol looks like a cross or a compass – implying the power of the Witches over the four elements. Sometimes the knot is intercircled binding the power for the spell caster. Witches used this symbol to bind or change the weather and in other spells to assert their magical dominance over the physical world.

However, the same symbol was also used as a protection charm in Witch wars. It was believe to protect the one who bears it from all kinds of magic.

To tap into its power carve the Witch’s knot on a candle appropriate for your wish. For example, if love is what you seek for, try a pink one. For success, a golden one. Then, light the candle in the same way you use in candle magic.