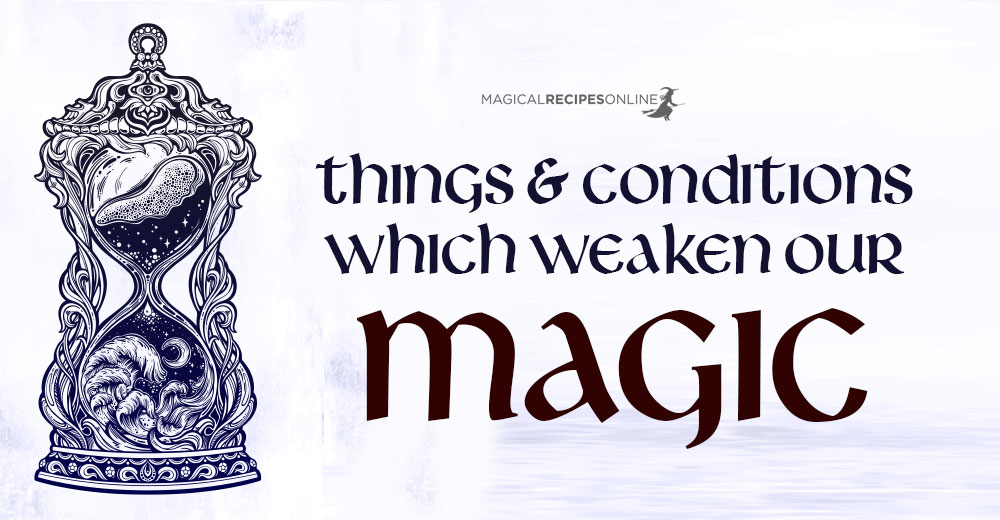 Does it make you wonder why Magic is not at its rightful place? Have you ever caught yourself thinking if magic was stronger some decades ago? Well, it was. Unfortunately this phenomenon is based on several factors. Things we can change and things we cannot. But the main answer lies on how we’ve built our lives. We constantly attract situations, buy things and hang out with people that weaken our magic. This article’s purpose is to make sure, we alter our ways in order to strengthen our magic and reverse this procedure. Let’s make this World Magical again!

Things that Weaken our Magic

In order to make things even clearer, we’ve created two groups or habits and things that weaken our magic. By categorising the factors, we can easily find solutions and make plans towards our goal.

1. Household Kitchen Tools made by Iron

It is believed in Witchcraft that ‘iron’ can weaken our magic, especially the one related to nature and the fairy Realm – as described in our article of Fairy Doctors. Iron corresponds to the Material Realm. It’s the strongest instrument to attune with the powers of the Material World. Moreover, it acts as a force of disenchantment, weakening not only ours but also the magic of plants and herbs we use.

Solution: If you use Mortar and pestle, use a wooden one or one made of granite – like this! In general, if you can, avoid using metallic household tools. They neutralise the magic of the food and herbs.

For two reasons. One many parts of these devices are made of Iron. As we’ve already seen, continuous touch of iron can neutralise our Magic.

More importantly, these devices are addictive. Constant use of them can distract us and divert our focus from the real world into an imaginary one. They can also mess with our emotions and create a similar-to-autism syndrome. Thirsting for ‘likes’ should not be our goal.

However, I should mention here clearly that  thanks to them, exchange of the Witchcraft Wisdom is easier than ever. We could not exist as magazine along with other magnificent magazines and pages. Therefore, we truly believe handling them in moderation can both strengthen our magic and avoid all the repercussions of obsessive and persistent use.

Let me explain. There are many ways from which we draw magic power. One of them, is the process of eating. According to the Old Ways, every meal, is a communication with Mother Nature. Every food has it’s own particular magical powers as they correspond to each of the Seven Magical Planets and the Four Elements. For example, yogurt corresponds to Saturn (as it requires time and effort to be made). Therefore, each bite, replenishes timeworn magical powers, at least the ones that have to do with Earth, time, health, courage and patience.

According to Tao, the Ancient Religion of China and one of the most respected magical traditions, when we each, food’s energy – chi, is processed by ‘the triple burner’, a powerful meridian which corresponds to Fire. From this meridian, the energy of the food – chi, is beings transported to our body. Processed food or eating fast without proper focus, strips food from each power.

It is very well documented that noise can bring many unfortunate consequences on your body. Noise can raise the levels of cortizol, magnifying the levels of anxiety on your body. In this way, you lose emotional and mental balance, things which are considered vital to your magical powers. Witches used to say ‘to dare, to do and  keep silent’. On way to translate ‘to keep silent’ is to do magic in a quiet place. In silence, magic is strengthened.

This is actually a highly debatable issue. There are strong arguments in both sides. Even in Magical Recipes Online we’ve got different opinions on this subject.

Although it may sound appealing to get instant results by calling a demon to do your bidding, this always comes with a price. Demons (and by demons we mean evil spirits) are smart entities whose purpose is not to help you, but to consume your magical energy.

Due to my experience, most witches who messed their Craft with the Dark Arts, they had severe consequences. Although at some point, things were amazing, the falling was pretty rough. The Cosmic Law of ‘Free Will’ should never be violated.

So if you wonder “what can I do to avert the evil influences cast by a Dark Witch?”. Just break the spell and cast protection. Because frankly, if you could bind this witch’s power, would you repeat the same rituals for every witch? That’s a waste of energy dear.

Something that can is pretty similar to “messing with dark arts” is trying to assert your dominance to another Witch. Trying to ‘bind’ someone else’s power is both harmful and ridiculous. No one can bind another’s power because simply these come from the Spirit and spirits are part of your divine heritage. What a naughty witch can do, it to confuse someone into believe that his/her powers are bound. (We will get another article exactly on this).

Anyway, what really matters, it that by trying to ‘bind’ someone else’s power creates a ripple effect which backfires to you. Your (wise and immortal) Spirit, trying to save you from condemning yourself more, will try to push you away from the Craft, at least until things get clearer to you.

We are NOT created to solely hang around in houses and dark rooms. Humans are in fact animals, born to be outside, run, climb and enjoy Mother Nature. By forcing yourself to be always indoors you actually harm your magnificent aura.

Try to walk outside and close to mother nature. Woods refresh your magical abilities. Visit local forests or lakes/rivers/sea to better your contact with the elements.

Having to explain what is magic and why you practice Witchcraft can be really exhausting. Trying to prove what you believe usually lowers your vibration. Trust me. We’ve got hundreds of ‘faithless’ messages, reviews, feedback, comments etc. However, we should make peace with the fact that some people cannot see what we do. And for better or for worse we love magic! We won’t let them weaken our magic.

Hanging out with people who share the same beliefs can actually heal and empower your aura and your magical powers.

This is why we’ve already created a Magical Community – Social Network of people who share Witchcraft and Magic as common interest. Our goal is to make this community stronger and help witches communicate with each other and create stronger bonds. Qooest awaits!