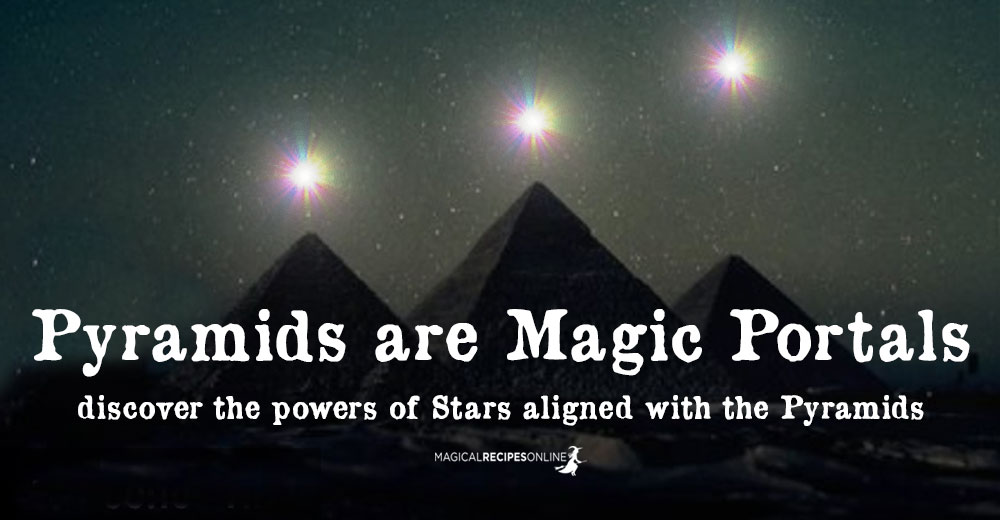 One of the 7 Wonders of the Ancient World, and probably one of the most mesmerising buildings ever created. The Pyramids of Egypt stand still, for thousands of years, constantly reminding us of the secrets and the magic once existed. What we do know about the ancient magic is really just remnants, which just point out how much we really don’t know. For example, that Pyramids are Magic Portals.

What has recently been (re)discovered is that the pyramids of Egypt are strategically build to align with powerful stars and constellations, which were believed to radiate unbelievable power from other realms. Architecture, Witchcraft and Astrology was part of a very complex Belief System, so intense as if it descended from other Worlds. The Purpose of everything was to attune with Ma’at, the cosmic balance of the World.

Pyramids are considered the geometrical object corresponding directly to Fire. As you know from your Lessons, Fire is a strong and risky element, yet it’s considered, by many mages, the most powerful one, second only to Aether – the fifth element. Fire is considered to be energy incarnated. Hence, Pyramids are magic portals, so much more than they are a burial place. They were a nexus of Power, deliberately build to connect the king with the forces above.

Pyramids and the Stars

As discussed above, Pyramids are objects linked with fire, which is a very powerful element with excessive energy. If this energy is used properly, it can help us transcend the planes of existence. Hence, Pyramids act as portals, which can help us travel beyond the boundaries of the physical plane.

Fire is the heart of the Sun and all Stars above. Fire Magic is linked with Star Magic, which, of course, is a more sophisticated form of the practice of the Element of Fire. And yes. Egyptian Priests and Priestesses were keen adepts of both Fire and Star Magic.

If not all, many ancient monuments were deliberately aligned with the stars and the constellations. Pyramids were not an exception.

Constellation of Orion and Sirius

The constellation which is most linked with ancient Egypt is Orion and Canis Major (the Great Dog) who follows Orion, believed to be the Guardian of the Soul of Horus, the son of Osiris and Isis. Its most bright star, probably one of the most famous stars in Ancient World, is Sirius also known as the Dog Star. As Sirius is the brightest of Stars, it was observed and honoured in the ancient times.

According to ancient astrologers and Ptolemy, Sirius has the qualities of Jupiter and Mars. He is protective yet fierce and full of opportunities. Moreover, Sirius is associated with Vervain, one of the Faery plants. According to Raven Grimassi, “its blossom has long been a sign of peace when carried by messengers.” 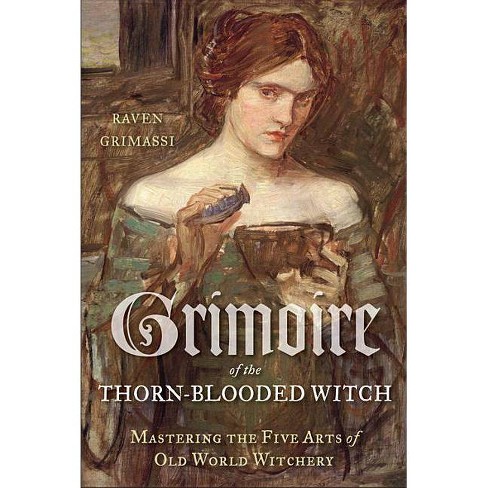 Grimoire Of The Thorn-Blooded Witch – By Raven Grimassi

Sirius in Alchemy & Witchcraft is associated with:

(Probably because of his association with Osiris & Isis, the divine couple).

It’s impossible not to notice that there is a remarkable correlation between the location of the three largest pyramids and the constellation Orion. And there’s a reason for that. As known since antiquity, Orion and Sirius were associated with Osiris, the god of rebirth and afterlife, by the ancient Egyptians, and his wife Isis, Goddess of Magic.

Sirius was also named as ‘Divine Sepat’ which is a clear association to the Sacred Soul of Isis. Hence, in the Dedendrah’s temple of Isis-Hathor there is an inscription which denotes her association with Sirius: “…her majesty Isis shines into the temple on New Year’s Day, as she mingles her light with that of her father Ra on the horizon…”

As we said, Sirius was also associated with Osiris. Osiris was associated with the cycles observed in nature preserving Ma’at, the cosmic balance. Furthermore, the God of the Afterlife was linked in particular with vegetation and the annual flooding of Nile. This was celebrated and honoured through his links with the heliacal rising of Orion and Sirius at the start of the new Egyptian year. You’ve heard about it. We still honour these days. Only now we call them… ‘the dog days’.

What are the Dog Days? These are the hottest days of the year in the Northern Hemisphere. Before the ‘Dog Days’, Sirius cannot be seen for about 70 days, from May to few weeks after midsummer (usually June 21). This happens because the Sun conjuncts Sirius, and the sunlight renders Sirius invisible.

After midsummer, the heliacal rising of Sirius is when the star and sun are sufficiently separated so that—for the first time in 70 days—Sirius can be seen on the horizon just before dawn. In the northern hemisphere, this occurs in mid-to-late summer, the hottest part of the year.

It was believed that the heat of the summer was brought by sirius, the ‘Spiritual Sun’, the cosmic heart of our Sun

Egyptian stargazers thought that the heat of the Summer days were coming from Sirius.  Not only Sirius affected heat, but they also observed that the appearing of Sirius was changing the life-giving Nile. Ancient Egyptians noted that Sirius rose just before the Sun each year immediately prior to the annual flooding of the river Nile. Of course this could not go unnoticed by those keen ancient astrologers. Because, although the floods could bring destruction, they also fertilised the soil and brought new life to the land of Egypt. Here, let me remind you that Osiris – god linked with Sirius, the Sparkling one – is the god of Rebirth, vegetation and fertility.

The Egyptian New year was celebrated with a festival known as ‘The Arrival of Sirius’ (known as Sopdet in Ancient Egypt), now known as the ‘Dog Days’. Almanac makers vary in the dating of this period, which lasts anywhere from four to six weeks. Hence, Dog Days vary between early July and early September.

Dog Days are days of extreme magical power, one can tap into for an instant taste of abundance. Hence, one can burn dried Vervain, in order to connect with the magic of Sirius and the Dog Days.

By some ancient Greek accounts, Sirius is also associated with God Pan.

According to Hinduism and its sacred text Mahabharata Sirius is god Dharma, who took the form of Svana, the dog of Prince Yudhisitra.

The Catholic Church could not abolish the significance of these days. In the 1552 Book of Common Prayer (Church of England), identifies Dog Days (Dog Daies) as a specific liturgical date designated for certain scripture readings beginning with the scripture readings for July 7 and ending August 18. Anglicans follow the same liturgical calendar and lectionary found in The Book of Common Prayer. Finally, it’s possible that celebration of the Roch by the Catholic Church on 16 August, owes some of his legacy to the dog days. The Roch is the legendary medieval patron saint of dogs.

Of course Pyramids alignment to Orion and Sirius is a direct attempt to tap into this otherworldly power. Furthermore, not only Egypt’s pyramids were attempting to tap into this power. As explicitly shown in the picture, Mexican and Chinese pyramids of Xi’an also follow the same pattern. What was once obvious, now is almost forgotten.

Thankfully, not lost. Here, we will help you remember what was once every-day practice. Let’s revive Magic. Join us <3

PREVIOUSGreek Gods and Goddesses have a message for you!
NEXT5 Signs You are a born Clairvoyant Psychic