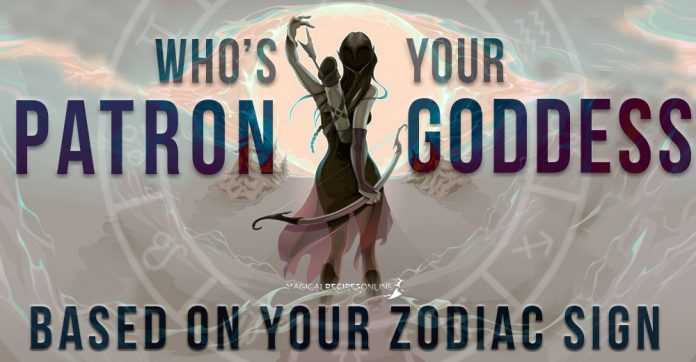 Astrology is the very intense and powerful method for both divination and magical purposes. It is considered extremely important to understand yourself through this occult art. Ancient Priests and Priestesses believed that each Zodiac Sign is affiliated with deities and spirits due to the nature of each sign. Moreover, occultists and mysticists consulted astrology in order to perform summoning spells and other rituals. Therefore, each sign has affiliated entities from which we tried to define one Patron Goddess in this article.

Call upon your ‘Patron Goddess’.

Note that these deities are so powerful that of course they transcend the limits of one zodiac sign. However, it just feels more right to call upon the ‘Patron Goddess’ who is naturally closer to you. Furthermore, this connection might already be clear to you. Some ideas to tap into the Goddess’s power.

Aries Goddess: Brighid, the Bright One

Your Patron Goddess is Brigid (or Brighid), born of the Dagda the good omnipotent God of the Tuatha de Danann (translated as the people of the Goddess Danu- the Primordial Waters), is a beloved Goddess of Ireland, although her worship spread throughout England where she is more famously known as Brigantia. Many springs and wells were dedicated to the Goddess both in Ireland and England. 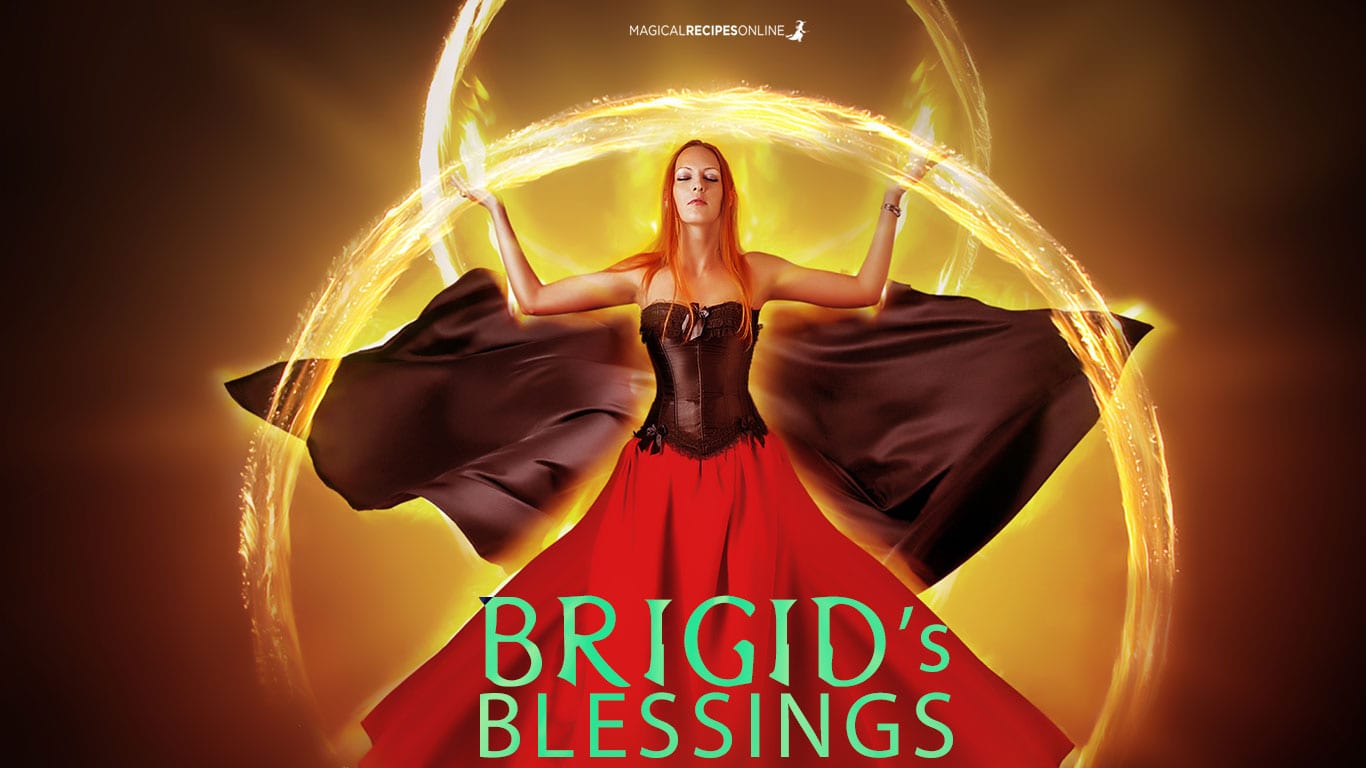 Brigid is a Goddess of Fire, Light and Warmth and her name means “Bright / Exalted One”. She is the Master of All Arts (including magic) and she is usually depicted as a blacksmith. It is said that once Brigid”s warriors were ones called Brigands. She is the Keeper of the Divine Forge and Hearth capable to transform, with her own magical, alchemical, divine transmutation, one thing to another.

Taurus Goddess: Hathor, the Mistress of the West

Your Patron Goddess is Hathor! She was one of the most popular Deities in Ancient Egypt. Hathor was worshipped by royalty and common people alike. In temples and of course tomb paintings, she is often depicted as “Mistress of the West,” who is welcoming the dead into the Afterlife. 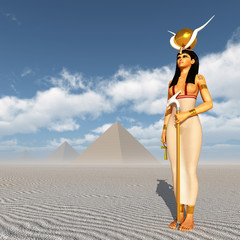 In other roles, she was a goddess of love, joy, music, dance, foreign lands, and fertility. She was believed to assist women in childbirth and to be the patron goddess of miners. In few words, everything a Taurus person adores in the most divine essence.

Your Patron Goddess is Iris, the winged Goddess of Mount Olympus, who links the Gods with Human Race. She is responsible to deliver the omens and the messages of the Gods to the mortals while she also helped Gods when needed.

She travels with the speed of wind from one end of the world to the other, and into the depths of the sea and the underworld. Iris, the Golden Winged Goddess, is the personification of Rainbow. With her 7 major colors of the Rainbow, she symbolizes the diversity of Life and the 7 (and much more) Realms she can travel to.

Cancer Goddess: Artemis-Diana, the Shining One

Your Patron Goddess is the twin sister of Apollo. Both are God and Goddess of the Sun and the Moon. Artemis, is the divine huntress, the one who keeps us safe and helps women when giving birth. This sacred duty, to help pregnant women, made her extremely popular in the Ancient World. She was called ‘the Stainless Maiden‘, the ‘Safe One‘ and the ‘Uninjured One‘. She was the goddess of childbirth and midwives.

Moreover, Artemis, as the Goddess of the Moon was considered to be one of the most powerful Sorceresses, the World has ever met. Her priestesses could actually call down the Moon (see more here).

Sekhmet is one of the oldest and most worshiped Goddesses in the Egyptian Pantheon. Her name derives from the word “sekhem” which means power. Thus most scholars often refer to the Goddess Sekhmet as the “Powerful One” or “the one who is Powerful”.

Sekhmet was considered a warrior Goddess, fierce and powerful, protectress of everything that is sacred, of the Egyptian borders and the Reign of Pharaohs. For these attributes she is worshipped as “the One before Whom Evil trembles” and as “the One who mauls” underlining her aspects as the Divine Retribution. Sekhmet is believed to stand and defend Ra from his great enemy, Apophis the great evil serpent.

Persephone, is the Virgo herself. She is the beautiful Maiden who enchanted the King of the Underworld. After hearing her laugh, Hades, the feared god of the underworld fell in love with the beautiful daughter of Demeter, goddess of the harvest. Persephone. One day Hades watched Persephone play with Cerberus and decided that she must be his for all time, so he stole her from the world, taking her to the underworld.

Your Patron Goddess, is a loving mother, the mistress of all Magic and Healings. Isis is the wife of Osiris and mother of Horus. Isis magic was so strong that she even managed to bring her wife back to life in order to make their son, Horus. Everyone prayed to her. The rich, the poor, the master and the slaves, for Isis is the loving mother of all and she is always ready to hear our pleas. Let’s dive into Isis Zodiac Sign wisdom. 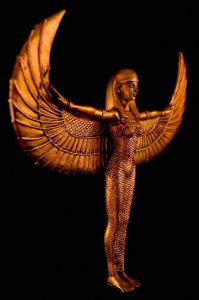 She is the perfect wife, the one who is devoted to her marriage and does anything possible to protect her family. Isis is the mistress of Arts but she is also confident and wise.

A warrior goddess that is associated with death and is often represented by a trio of ravens. The Morrígan loves these birds. Finding a Black feather by chance was considered an omen from the Underworld. The connection with your Patron Goddess and the Crows is obvious which is considered a bird who can see the Realm of the Dead.

It is she who decides who shall leave the battlefield alive and who shall be carried away on their shields. Her power is amazing although only few can know its extent and she love to keep the secrets for herself. 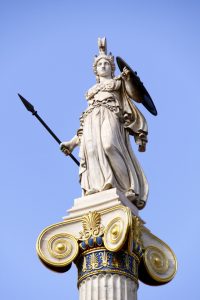 Athena’s sacred animal is the Owl, who observes everything, knowing the truth. She will make sure we get the Wisdom we crave if we deserve it. Therefore, we have to be honest and good-hearted.

Freya is the patroness of Witches and both the witches and the form of magic they practiced was named Seidr. Legend has that only females could learn and practice Seidrand the God Odin was dressed (or even changed) to a woman to learn this way of magic. Seidr is described as a shamanic form of magic and the main practices include spellcasting by chanting, contacting spirits and the dead, divination and seeing in the future. Entering in a trance phase it is said that they transferred the strength of the enemies in their own warriors. Finally, Freya has a deep love and affiliation with the fairies.

While Freya was in the underground kingdom of dwarves, Svartalfaheim, she observed four dwarves to forge a wonderful necklace made of gold and precious jewels,  Brisingamen, the emblem of the stars.  In order to obtain this treasure, Freya asked the dwarves what they want in return. As you may have guessed Freya  had to “sleep” with the dwarves in order to obtain this treasure  that later she enchanted further with her magic.

Queen Mab or Maev/Maeb is the queen of Connacht in the Ulster Cycle of Irish theology. A powerful Fairy Queen – your Patron Goddess –  who is referred as the ‘intoxicating one’. Medb is strong-willed, ambitious, cunning and promiscuous, and is an archetypal warrior queen. She is believed to be a manifestation of the sovereignty goddess. 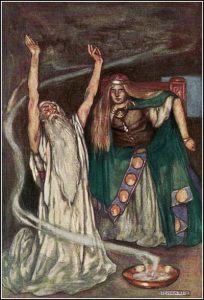 In ancient and medieval Ireland, the drinking of mead was a key part of a king’s inauguration ceremony. According to tradition, a supernatural woman representing the sovereignty of the land chooses a king by offering him an alcoholic drink, thus bestowing sovereignty upon him.

Yemaya (Yemoja, Iemanja, Yemana) is known as Mother of the Sea, the lady of Rain, the Creator Mother and she is one of the Seven African Powers, the well-respected Gods of the Yoruban pantheon. Her name (Yey Omo Eja) means “Mother whose Children are the Fish” and expresses her direct association with the sea. Often depicted as a mermaid or a black woman at the seaside wearing a blue-green and white dress, Yemaya is associated with the ocean, saltwater, rain, healing fertility, the Moon, the subconscious, creativity and female mysteries such as menstruation, conception, pregnancy, childbirth and menopause. 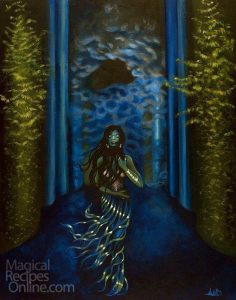 Yemaya governs the household and she grants protection, safety, love and healing to all those who ask her aid. Yemaya is a merciful, compassionate spirit who traditionally was invoked by fishermen to bless their nets and provide food to their family. In addition, the fishermen’s wives often prayed to Yemaya in order to grant her protection and return their husbands safely back home. Finally, Yemaya is the patroness of all Witches and two of her sacred names are Queen of Witches and Mama Watta (Mother of the Waters) which explain why many of her followers built their altars next to the Ocean.

So Tell Us, Who’s Your Patron Goddess? 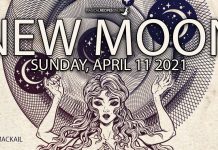 Sundays New Moon in Aries – ‘Can Do’ on Steroids 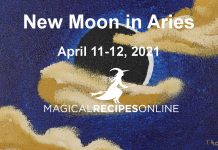