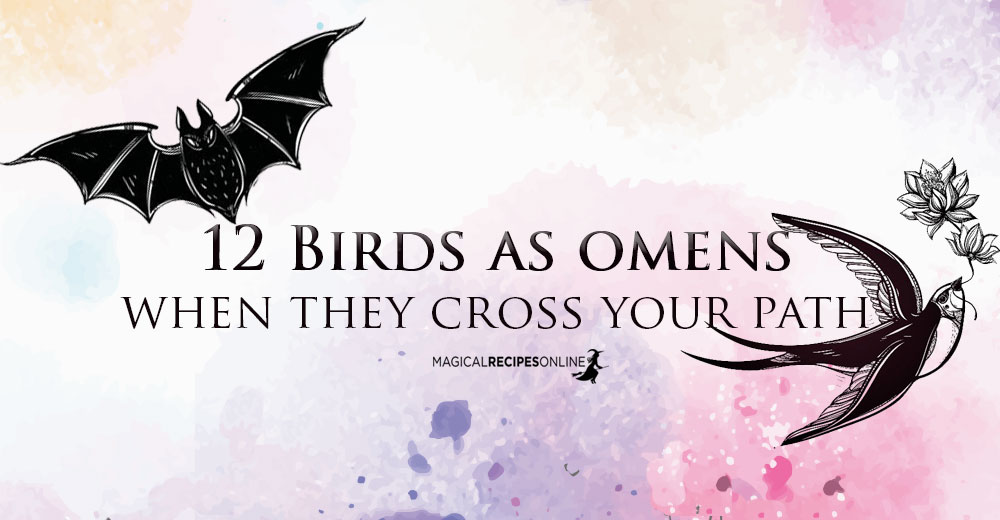 According to the Old Ways, if any of these birds accidentally cross your path, powerful omens are presented to you, for good or ill. Prophets of the Old Religion used to watch the skies, asking from the Gods for a signal. Most usually, they interpreted the presence (or the moving pattern) of birds as omens. For example, an eagle carrying a snake in its claws is a well-known omen of victory.

Birds as Omens and the Old Religion

During the Old Times animals and plants were all associated with Gods and Goddess. Athena had Owl as her sacred animal, symbolizing her broad awareness and alertness, while Zeus sacred bird was the Eagle, symbolizing that as this amazing bird flies so high, so does Zeus can always see the whole world. Everyone had a soft spot for animals, therefore close encounters with animals were supposed to be divine interventions at some point. We have selected the ones who are considered to be the most significant bird omens of all.

Hummingbird is harbinger of Joy and victory over darkness. The Atzec God Huitzilopochtli, who literally means the Southern Hummingbird (or left-handed humminbird), is considered a warrior. Huitzilopochtli, is an incarnation of the Sun and the Solar Forces who keeps on struggling with the forces of Night to keep mankind and the whole creation alive.

Seeing a Hummingbird is an omen of hope. Especially is the hummingbird is hovering, is considered a divine message from Huitzilopochtli, telling you that you can achieve the impossible. Are you close to the truth?

When you spot a swallow earlier than the Spring Equinox is considered a most auspicious omen. If swallows choose to build their nest on your house, this is an omen of happiness, fertility and good luck. However, if someone destroys it, this is harbinger of bad news.

Owls are believed to be harbingers of doom and carriers of unimaginable wisdom at the same time. (Read here more about Owls as totem animals) Maybe owls know things and they appear to warn us about what is coming – usually something huge – either this is for good or ill. Owls have been associated with many gods and goddess but one of the most powerful association is with Athena (Minerva) the Goddess of Wisdom in Ancient Greece.

When an Owl appears one has to be extra careful about his/her next steps as the Owl tries to make us ready for what’s coming (it doesn’t have to be bad but it’s certainly very important or even life-changing). If you are a Witch, the appearance of an Owl probably means that our magic is strong and we should be very careful with the energies we summon. We should choose wisely!

Owls are not omens of Bad Luck or Harbingers of Doom (they can be if we see two owls fighting and shouting over a house). They are messengers of News of Great importance. Owls are considered Royal Birds, therefore seeing them can be considered as omens of success.

These creatures have the bad reputation of being harbingers of death and dark magic. However, although they sometimes can bring bad news, they are the personification of truth. Crow / Raves in the Sacred bird of Thoth, Great Egyptian God of Wisdom and Magic. Moreover, Crow/Raven is sacred to Apollo (the God of Sun), Hera (Queen of the Gods) and Asclepius (God of Medicine). 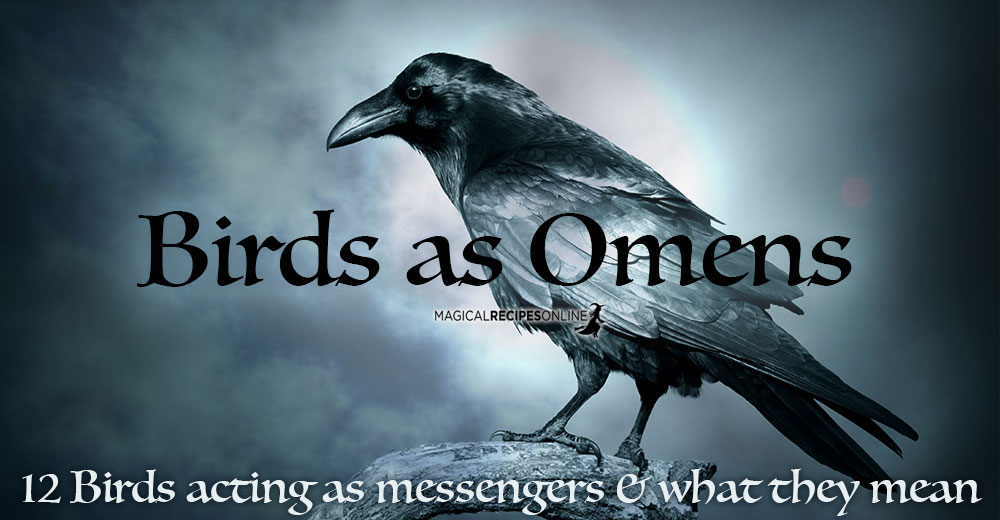 Seeing a Crow means that truth is going to be exposed to you soon. Ancients believe that wisdom cannot be achieved if you are not ready to receive this information. The sight of a Crow is the divine confirmation that you are now ready! Soon you will learn something really important.

Hawks are symbols of the mighty forces of Good. Both Horus (Son of Osiris and Isis) and Apollo (Greek God of the Sun and Witchcraft) have Falcons/Hawks as their sacred birds. Horus, also called ‘Sky God’, is falcon-headed avenging the Death of his father, Osiris.

When hawks and falcons accidentally cross your path – or just appear out of nowhere – is a powerful omen to be alert, as evil is nearby. Hawk is ready to fight back and attack the evil. Amongst all birds as omens, Hawk is considered to be the one who prepares us for a battle. Are you ready? Shields up!

Vultures are the sacred birds of Goddess Mut, the primordial Goddess of Water, which every sprang from her and Nekhbet, goddess of Heavens. The priestesses of Nekhbet were called muu (mothers) – signifying their association with Mut, the great Mother – and wore robes of Egyptian vulture feathers. Amongst all birds as omens, Vultures are the most misunderstood.

Vultures are omens of fertility, symbolizing the Great Mother, our Earth. However, something needs to be sacrificed. Success is near but work must be done. The low vibrations need to be transmuted into something greater (vultures were believed to devour the souls of the dead, only to carry them to the other realms).

Herons are wonderful birds who love to hang around lakes and peaceful waters. But did you know, that the earliest depiction of Phoenix – the sacred bird of Resurrection – is in fact a Heron? The Hieroglyph of the Phoenix is a heron, the Benu Bird. Hence, amongst all birds as omens, spotting a Heron is a harbinger of Rebirth.

Herons are considered to be extremely fortunate birds especially if they somehow approach you. Moreover, Herons deliver you a divine message of Rebirth. Let your sorrow die. From its ashes, a new life will soon begin. Time has Come!

The harbingers of the Night, bats are feared from almost anyone. Not witches however. What do Bats symbolize? Well Death of Course!

However, Death in mysticism rarely means physical death. Bats symbolize a significant transition, a major shift. These dark creatures you remind you to be alert and use your senses to make the best you can in order to benefit from the change (and the opportunity) that’s really really close! Are you ready?

Stork is a symbol of Motherhood and Birth (as well as rebirth). Hera (Juno), the all-mighty Queen of the Gods, used to inflict punishment by transforming people into storks. However, it was a bird sacred to her. Hence, as Hera is the Goddess of family, fertility and motherhood, storks are harbingers of these qualities.

Spotting a Stork is believed that something new is coming to your life – something extremely dear (as a newborn child). However, it’s not sure that you’ll get it. You need to be alert. Let’s not forget that Storks are the Egyptian symbols of our Souls (ba). How easy could it be to catch a soul ?

Peacocks are also sacred birds of Hera, the all-mighty Queen of the Gods. In this case however, peacocks are harbingers of Success. From all Birds as Omens, Peacocks are the most auspicious ones!

If a peacock appears to you then prosperity and success is coming. Moreover, if the peacock spreads its magnificent tail, is a sing of very Good Luck! If you are single, happiness and marriage may come soon! However, if a peacock feather is found in your property, then Evil Eye might be after you! Make sure to dispel it!

These are the sacred birds of Aphrodite (Venus), the Goddess of Beauty, Love and Peace. Although Aphrodite is a mighty Goddess, when she appears as a Dove, she spreads the message of Love, Beauty and Peace.

Hence, is a Dove (especially a White one) appears, is a symbol of Aphrodite giving you an omen of Beauty and Peace. Something really sweet is coming towards you. Open your heart and get ready!

Amongst all Birds as Omens, robins are the most intense symbols of Good Luck, and happy outcomes! Why? Because Robins symbolize the rejuvenating forces of Fire. Robins are the carriers of the Powers of Sacred Flames. Robins are also associated with the Phoenix, the Sacred Bird of Fire.

If a Robin enters your house, this is a VERY powerful omen of change for the better. Evil can no longer hold you back. You are free as the Phoenix. Moreover, Good Luck is by your side and prosperity is coming. If it signs, then Good Luck is even greater and ready to change your Life!