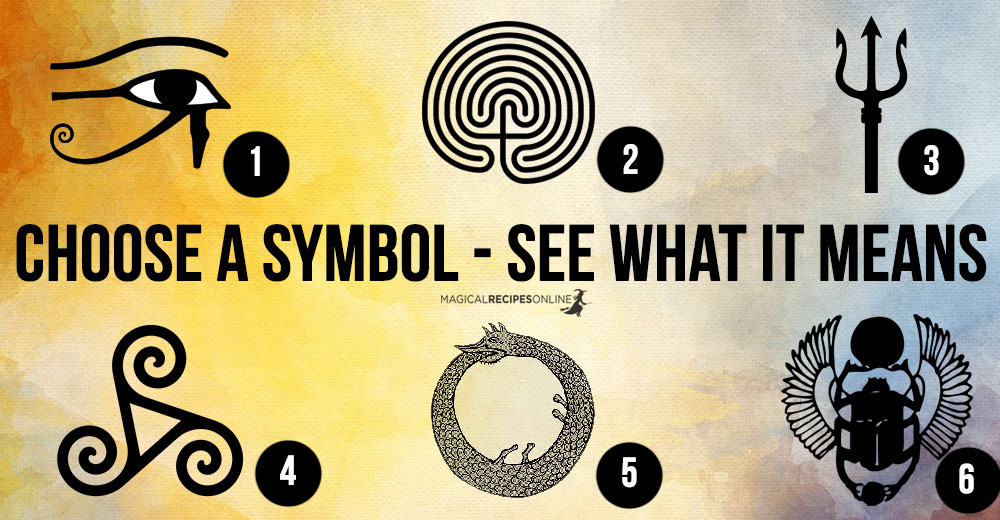 A Symbol is a powerful tool of magic. It is an archetype buried deep in the universal soil of human race’s subconscious. Hence, the magical forces of the symbols get their power from every human being’s subconscious, linking them all in an invisible yet unbreakable way. The more a symbol is used the more magical power it gets.

The following 6 symbols are as powerful as a symbol can be. All are linked with invisible forces. They are used for centuries in magical practices. Ancient priests and priestesses carved these talismans in ritual artefacts to tap into their power. We still use it in magic and you can find articles linked in all the following symbols. Each symbols attracts us when we need it the most. They speak to us in a very mystical way. Listen to them. Which one calls for you?

Which Symbol do you choose?

The eye of Horus also known as Wadjet – Ouadza (or Udjat, Wedjat) is one of the most distinguished and used symbols of the Ancient Egypt. If you choose the Eye of Horus your aura needs protection immediately.

What to do: Call the divine forces of Light to protect you. You can summon your Guardian Angel to ask his advice and help. You can also perform small banishment rituals to cleanse negativity. Moreover, you should check here the symptoms of the Evil Eye, and the power of the Malevolent gaze.

Labyrinths were created to protect what in their centre dwells, in the myth Minotaur. Trying to decrypt the symbol we could say that Labyrinth helps us find our true nature, our spiritual centre, our God seed. Labyrinths are created to cheat imps and demons by trapping them forever in their centre. If the Labyrinth calls for you then you need to find your inner centre.

Labyrinths were a place for ceremonial rituals in Minoic Crete where initiates, priests and acolytes where dancing on them till they reach an ecstatic state, getting connected with the Divine.

What to do: If the Labyrinth is your choice then you’ve probably lost yourself lately. Hard work, tough schedules and exhausting lifestyle has driven you apart your spiritual self. You definitely need to find your inner peace. You need to search for your spiritual centre.

The Trident is a symbol of a strong divine Patriarch figure. It is the symbol of Lord Siva of Hinduism and God Poseidon of Greek Religion. The Three Edges of his Trident may symbolize his Three Eyes and the Middle edge may symbolise his Third Eye.

Although Trident was lated demonised by Christian nations in fact this very symbol, is a symbol of Abundance, Blessings, Divine Dominion and a magical tool to banish all Fears. Poseidon was one of the strongest gods of Greek Religion (the three brothers Zeus, Poseidon and Hades). If you choose the trident then you need to banish your fears and assert your spiritual dominance to the astral realm.

What to do: You have to declare to the World that you are not afraid! Hence you are free and not evil can touch you. Use the power of the Trident to banish fears.

The number Three has always been considered magical and/or sacred. In triskelion the Pillars of our body are powerful forces of Change, overcoming difficulties and jumping over physical and spiritual barriers. If you choose the Triskelion then you need something to help you break the barriers of your physical life.

The Triskelion is a personification of the creative force of the Sun. Furthermore the Solar Forces help us bloom. Triskelion’s three legs united, create a rather “unnatural” force which can be tapped into to create in reality what we really want.

What to do: Tap into the Solar Forces to create a matrix of bright energy. It will help you raise your vibrations too – see here how to do it.

Uroborus (or Ouroborus) was used by Gnostics a lot and it had been confused with dark arts during the Middle Age. It seems like that this symbol was a sacred emblem in Phrygia in the first centuries bC. Yet Uroborus has a much more harmless meaning. It is a reminder of Karma and endless time-action-reaction continuum.

If you choose the Uroborus you need to take an honest look at your Karma. You need to make some changes my dear as you are trapped in an endless loop where nothing ever changes. Why doesn’t it change? Because you don’t want to change. Breaking the Circle of Ouroborus / Uroborus is the breaking the Circle of incarnations and the entering to the blessed Nirvana.

What to do: In a more applicable way, find what you are doing (and redoing) wrong over and over again and change it – you can also cast the karma cleansing spell! You can also see here more about your past lives and see what you did wrong.

Scarabs are beetles. Beetles lay their eggs in dung and dead bodies of other animals, or maybe beetles too. From the dead and the waste, scarabs emerge alive, and this is why ancient Egyptians believed that scarabs come from the dead, from the underworld or that they are consisted from Underworld’s matter. This is why, if you choose this symbol you need to channel the wisdom of your dead ancestors.

Scarab is also associated with Resurrection, Rebirth and Reincarnations. Because of Scarabs association with Ra, Phoenix and Rebirth, scarabs are very significant symbols utilized in health and longevity spells. Scarabs are considered “living” symbols, you can constantly request for vitality, rebirth and better health for any of your beloved or even yourself. If you choose the Scarab then you thirst for vitality.

What to do: IF thats your choice then you need to find a way to replenish your energy. You should probably begin eating healthier and renew your gym membership. If some symptoms bother you consult with your medical doctor. Scarab is a calling to look for our selves but also not neglect our dead ancestors.