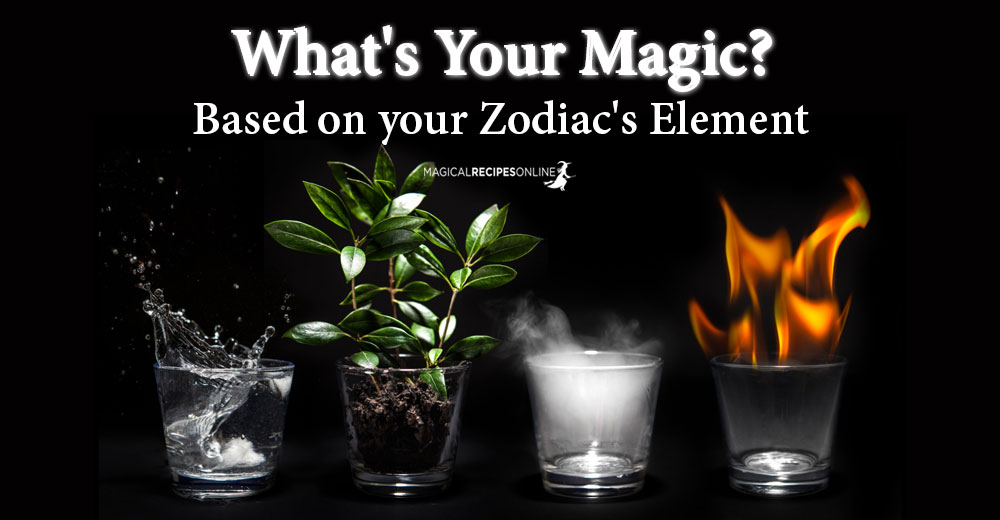 I’m pretty sure you are already quite familiar with Elemental Magic and the powers which stream from them. These 4 fundamental forces of nature – all governed by the fifth element, the Spirit – are actually the closest Magical Powers we can harness. Witches are Wizards in their initiation always ask the apprentices “What’s Your Magic?” in order to define the ‘colors’ of ones powers and aura.

Magical Elements of Nature & the Witch

The most comprehensive and easy way to define your Magical Powers is by looking to your Birth Chart (which is something you can do here, in Magical Recipes Online for free!) and define the balance of Elements in You. However, the quickest way is by answering one simple question. What’s Your Magic = What’s Your Sign?

As discussed previously in this article all Zodiac Signs have distinctive magical powers. However, all the Zodiac Signs get this power from their Cardinal Element. Fire, Earth, Air and Water. Moreover, each Cardinal Element rules over different paths of Magic. Remember what Gandalf the Grey said? “There are secrets only fire can tell…“…

Gandalf was actually referring to some magical rituals that are connected more to certain elements than others. This is why for example, knot magic is associated with Air. Hence, if someone belongs to the Element (Gemini, Libra, Aquarius) is prone to succeed if s/he practices this magical Art.

You have examined your relationship with the Elements, you feel the bond and you definitely want to explore more. Well you are on the right track and on the right page. Since you’ve defined which is YOUR element, we can now proceed with something much more interesting. What’s Your Magic based on your Magical Element.

Based on your Magical Sign’s Element you belong to one of the Next four teams. If you are born on cusps then you might need to check both elements.

In this team belong all who are born under the influence of Aries, Leo, Sagittarius or have major planets in these Signs (especially Moon and Mercury).

Fire is an Element which demands respect. It’s friendly yet dangerous and reckless. We do NOT play with fire. Witches respect and harness with boldness its power.

This may be the most famous practice in the history of Witchcraft. Candles have always been associated with magic, religion and all spiritual and divine practices since antiquity. Candle Magic is straight-forward and most usually all you need is the right candle and your desire! See here how you can start with Candle Magic performing the first spell today!

When we are actually talking about Exorcism, we are referring to this part of Magic when you focus your will to assert your spirit’s or divine entity’s will, over someone else who is ‘possessed’ or spellbound by the Dark Arts. This is actually a very powerful form of magic which suits the Element of Fire, the ones who are brave and potent. However, you should know that this is a very advanced practice. Not for the novice ones.

To reach exorcism one should first learn to practice Purification spells. Because of the cleansing properties of the Element of Fire, one who is close to this element can actually repel all unwanted energies from something or someone. Cleansing is associated with both Fire and Water although with fire things go wild – instantly. Check this Purification spell here.

Healing is based on the Arcane theory that all conditions of human body, mind and soul are based on the flow of the Magical Energy – also known as Chi. Therefore, one can heal by manipulating this energy. The ones who are considered to do so more effectively are the ones who belong to the element of fire (and water). Although all elements can heal, fire can do it miraculously.

Healing is based on Energy Manipulation as already noted above. Fire is pure energy (the purest form on this Realm). Therefore, one who can manipulate energy, can actually send it through time and space. This is one of the coolest things a Witch can do. Learn here how to send Energy!

In this team belong all who are born under the influence of Taurus, Virgo, Capricorn or have major planets in these Signs (especially Moon and Mercury).

Fire is an Element which demands patience. It’s cold and dark but its powers open bring abundance and steady power. Witches harness with patience and determination its power.

By ‘Druid Magic’ we usually call all the magical practices which require the element of Earth, the power of the Forests, trees, herbs and roots along with the power of animals. Druids were known for their uncanny knowledge over herbs, trees and animals. Those born under the influence of the Earth can actually use this relationship with the Forests to perform powerful magic. More druid magic here!

One more of this Elements vast powers is the Crystal Magic. All these who are born under the Influence of Earth can actually do miracle by using Crystals. Indeed, they can use the crystals to bring abundance, balance, vitality and protection. Crystals talk to these people. Learn the secrets of crystal magic here!

These arcane symbols of pure magical power are known to represent several entities and/or forces of nature. Runes are usually inscribed on wood or stones or even on the ground. This actually makes the ground/crystal/wood a portal from which the energy of the rune comes forth. Learn more about the Runes here!

As the Earth is solid and stable it looked pretty defensive to the ancient Witches and Wizards. They saw how the tides hit the steady mountains without affecting them. Therefore, they understood that one of the most potent abilities of the element is Protection against malicious energies. You can use the Power of Earth for protection!

Those who belong to the Element of Earth are believed to be closer to all living things both plants and animals. Therefore, they can more effectively ‘connect’ with totems, and ask help from them. All they have to do is perform a simple ritual to send this signal to the Spirit Realm. Here you can find this ritual.

In this team belong all who are born under the influence of Gemini, Libra, Aquarius or have major planets in these Signs (especially Moon and Mercury).

Air is an Element which demands free thinking. It’s unstable and fierce but its powers can bring freedom, focused power, independence and effective communication. Witches harness with patience and determination its power.

One of the most ancient and potent forms of Magic is the Knot Magic. It requires minimum time, minimum expenses but a lot of focus. This is there the Element of Air kicks in. In order to perform all kinds of Air Magic you need focus and mental clarity. This is why those who are born under the influence of Air are better in these kinds of spells. Need to know more about knot Magic? Check here our article!

Anyone who possesses a spirit can contact another spirit. Hence, all humans can reach other spirits and entities as long as they are focused enough and know so much their mind that they can actually understand their thoughts and the thoughts of others. This is why contacting spirits is actually so potent in the hands of those born under the influence of air. You can try the Automatic writing here!

Telepathy is actually ‘reading’ someone’s mind without words or other physical means. It’s pure thought transferred to another person. A telepathic person can actually send or receive messages.

Hence can actually affect thoughts. This is why a telepathic person is extremely powerful and also dangerous. Many armies in the world tried and still trying to enhance these powers.

Some are good at sending a thought/image/feeling, some at receiving, some in both. Those born under the influence of Air are believed to be natural talents in Telepathy. Check here how to read someone’s mind!

Remote Viewing is the ability to transfer our awareness to another time or space without actually traveling there. Therefore, if we do that, we can actually gather much information about history, magic and so on. Remote Viewing is extremely valuable to secret societies and military forces who practice it in the present time (like the US force).

This amazing ability is to project ‘one of our bodies’ through the Astral Realm. What is the Astral Realm you say? Well it’s actually a different world than ours, which vibrates higher in spiritual frequency. Therefore, when we are out there we can learn from the Spirits and the entities that dwell. Learn more about the amazing Astral Projection here!

In this team belong all who are born under the influence of Cancer, Scorpio, Pisces or have major planets in these Signs (especially Moon and Mercury).

Water is an Element which demands love and powerful emotions. It’s unstable and cold but its powers can bring balance, intuitive powers, power over the Realm of dreams and casting Illusions. Witches harness with love and patience its power.

Mirror Magic (Water) is the equivalent to Knot Magic (Air), Candle Magic (Fire) and Crystal Magic (Earth) as one of the most ancient paths of Magic. As Mirrors are also created by the still waters of the lake, a well or the sea, Mirror Magic belongs to the Element of Water. The reflection is a magical tool – see here how to use it!

As the Waters, the Rain and Fogs (all belonging to the element of Water) can compromise the Vision, water magic can be used to create illusions. Even watches the move ‘Craft’? Where there you would see a bunch of young girls playing with Glamour Magic – which actually works (see here how to ‘change’ your Eye Color) ! These are illusions. Moreover, illusions can be used as defensive mechanism.

Anything can be enchanted, anything! Every material thing can be drenched into magical energy and become something else (learn here how to do it properly). Charms and enchantments are used as a mobile magical device to echo the power of the Enchanter. So What’s Your Magic? Oh well… you are an enchanter!

Those born under the influence of Water are believed to have the ability to ‘see visions’ and receive prophetic dreams easier than others. Something that’s even closer to them is Hydromancy – the Art of Divination which solely used the Element of Water. Secrets… only Water can tell!

This is actually one of the most potent and powerful forms of Magic although it does require much time of practice – unless you are a natural. Affecting the Realm of Dreams is like affecting Reality itself. It is believed that those born under the influence of Water are more likely to have control over this realm. See here how to try to become a dreamwalker!